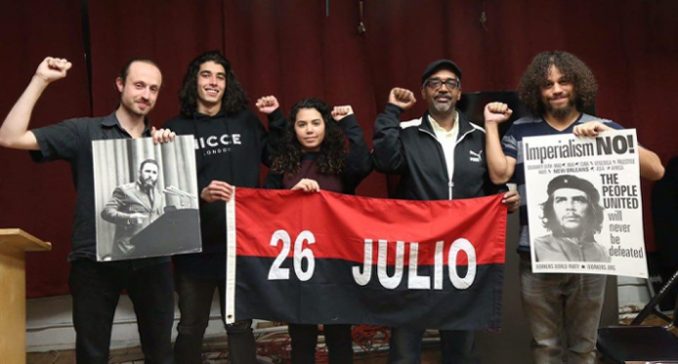 The following was adapted from a Workers World Party talk given Nov. 11 after the “In the Footsteps of Che International Brigade” returned from Cuba. Over 200 people from over 20 countries traveled with the brigade to show solidarity with the Cuban Revolution and to commemorate the 50th anniversary of Che Guevara’s death.

So far this year, three Category 4 or 5 hurricanes have made landfall in the Caribbean or southern United States: Harvey, Irma and Maria. It’s commonplace to speak of these storms as natural disasters. After all, they are natural events, albeit abetted by human-made climate change.

But there is nothing natural about the destruction that follows in a hurricane’s wake. Not in these times, when the dangers of hurricanes can be observed, predicted and communicated days in advance of landfall.

Nowadays, hurricanes are a human-made disaster, because the extent of their damage is determined based on the principles by which the societies they affect are organized.

Hundreds of people, perhaps more, have died in Puerto Rico in Maria’s aftermath. Harvey and Irma killed at least 160 people in the continental U.S., including 12 left to die in a Florida nursing home across the street from a functioning hospital. Why did more people die in that nursing home than in all of Cuba during Hurricane Irma?

Cuba safely and efficiently evacuated over a million people before Hurricanes Ivan and Dennis in 2004 and 2005, while over 100 people died during the 2005 Houston evacuation ahead of Hurricane Rita.

The answer is in one word: Socialism!

Cuba is a country organized under socialist principles for the benefit of its people and led by a Communist, Leninist Party. The U.S. is a capitalist, imperialist country, run by and for the bourgeoisie, their banks and their profits, with Puerto Rico, held as a U.S. colony, run by the banks through a Fiscal Control Board.

It’s all well and good to say socialist principles are why Cuba responds so well to hurricanes. But what I had the opportunity to learn in Cuba is how socialism enables Cuba to respond so effectively.

An hour’s drive from the north-central Cuban coast, where the impact of Irma was greatest, our delegation visited the University of Sancti Spiritus. There we met officials from Cuban National Civil Defense and representatives of the students and administration to learn about their response to hurricanes.

National Civil Defense is an integrated system, mobilizing all of Cuba’s response to protect its people, economy, social institutions and natural resources from both climate change and war.

In the revolution’s early years, Civil Defense concentrated on preparing the Cuban people to defend themselves against foreign military intervention. But Hurricane Flora, striking Cuba in 1963 and killing more than 1,200 people, showed painfully the need for disaster preparation, now the Civil Defense’s main focus.

Every Cuban adult goes through a civil defense training program preparing them to assist during evacuations. Since 1986, National Civil Defense has organized a yearly, nationwide, two-day hurricane preparedness drill. In every part of Cuba, evacuation and shelter plans are in place. When a hurricane arrives, people carry out what they have already practiced.

Stores of building materials, medications, tents and other supplies are strategically maintained across the island. Before Hurricane Harvey, Houston officials said it was impossible to organize an evacuation with just a few days notice. Exactly! You have to plan beforehand.

When hurricanes are imminent, a four-phase Cuban plan is set in motion:

Civil defense relies on pre-existing communication and coordination plans within the mass organizations and does not have to create an ad-hoc communication network with every emergency.

Cubans are evacuated along with their belongings, pets and whatever tools and equipment they need for work. Elderly and sick people are looked after. Everyone is accounted for and no one abandoned. Evacuation plans include contingencies to protect farm animals, machinery and other means of production to minimize economic losses. All these measures require extensive planning, and everyone is encouraged to participate.

The U.S. approach could not be more different: No mechanism is in place to mobilize people in a coordinated fashion, there are no large-scale hurricane response drills, and people are abandoned, left to organize their own evacuation, so that poor, infirm and elderly people are often unable to leave.

The day after Irma hit, the price of all construction materials in Cuba was halved. This is the difference between disaster socialism and disaster capitalism. Under capitalism, needed products become fabulously more expensive, and the capitalists make super-profits off people’s suffering.

But in Cuba the prices fall, because that’s what the people need. This happens despite the fact that building materials are one of the most difficult products for Cuba to purchase because of the U.S. blockade.

At the meeting we brigadistas attended, university students and administration representatives described their personal experiences with hurricane response.

In addition to the school providing civil defense courses, students regularly visit coastal fishing villages to develop relationships essential in an emergency. As Irma approached, students traveled to Yaguajay, a nearby town, to inform people of the need to evacuate. At least 1,000 Cubans from the coast were sheltered at the University of Sancti Spiritus ahead of Irma.

University staff lived on site and provided beds, food and also cultural activities, which are viewed as an essential need. Medical care, as always in Cuba, was available and free.

After the hurricane, students returned daily to Yaguajay and the surrounding areas to help with repairs, provide information about the rest of the country and eventually redecorate the community. Again, the arts are not seen as a luxury or bourgeois decadence: The community’s cultural decoration is seen as a basic material need.

Under long-term planning that is characteristic of socialism, Cuba acknowledges the tragic reality that many coastal villages will eventually be lost to rising sea levels because of climate change. Rather than abandoning these communities, the university helps them gradually relocate their homes to higher ground. The U.S. could not be more different: Consider the recent boom in high-priced high-rise construction along the Miami waterfront.

The speed of repairs in Yaguajay, and in Havana where the storm surged 6 meters, was incredible. Some damage was still visible when we were there, but daily life, both economic and social, had resumed. Contrast that with the U.S., where New York City is still repairing subway damage from Hurricane Sandy in 2012, and Puerto Rico is a massive humanitarian disaster.

One of the tragedies of hurricanes is their predictability. Year after year they come, and each time Cuba admirably provides for its people, while the capitalist world abandons its masses to their fate.

Lives are saved under socialism in Cuba, while people are left to die in the U.S. Why is capitalism utterly unwilling to respond to hurricanes?

Because under capitalism, the lives of the working and the oppressed are worth only the surplus value, otherwise known as profit, that can be extracted from them. In the era of capitalism at a dead end, when the crisis of overproduction is a continuous state of affairs, when the reserve army of labor is large and always growing, workers are easily replaced.

The death of hundreds and the displacement of millions isn’t seen as much of a problem for the capitalist class. Just the opposite! Disasters are a fantastic investment opportunity for capitalists, stimulating demand and increasing prices.

But what is the lot of our class, the lot of the working and the oppressed, under disaster capitalism? Exploitation, poverty, displacement, death.

If I can bring back one lesson from Cuba to you, it is that revolution IS possible. We can and must win.

Let us today, 50 years after Che’s death, and 100 years after the October Bolshevik Revolution, consider and draw strength from what Che said to us in the United States in 1964, borrowing from Cuban hero Jose Marti: “You North Americans are very lucky. You are fighting the most important fight of all — you live in the heart of the beast.”

Let us consider the awesome responsibility with which his words charge us.

Let us not shirk from the task before us, but go forward, confident in ourselves and our class. Vinceremos! Hasta la Victoria Siempre!