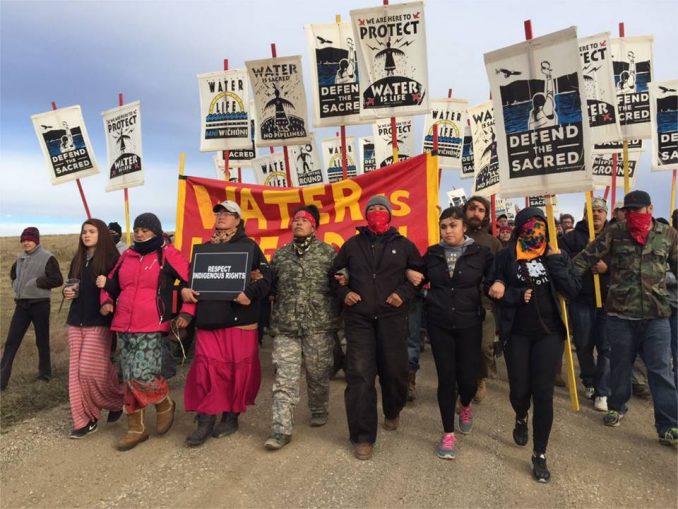 Following the directions of Big Oil’s Dakota Access Pipeline company, North Dakota Judge Thomas Merrick on Oct. 19 convicted and sentenced two water protectors to jail for their role in the protest at Standing Rock last year. Even the prosecution had not recommended jail time. Neither activist has any prior criminal record.

Three more water protectors — Red Fawn Fallis, Little Feather and Dion Ortiz — remain in jail awaiting trial on felony charges that could imprison them for 15 years to life. More than 850 people were arrested during the months of protests. Hundreds of activists await trial.

Not coincidentally, the Dakota Access LCC “gifted” the state of North Dakota $15 million, as well as another million to North Dakota, Iowa and Illinois police agencies, which, along with company goons, brutally suppressed the DAPL protesters with clubs, pepper spray, tear gas and fire hoses. (hpr1.com, Oct. 20)

The convictions of Redway and Simon stem from a peaceful protest of water protectors on Oct. 20, 2016, when 120 people were arrested while holding signs and praying in a pasture, protesting the Dakota Access Pipeline that threatens Native land and the water supply for millions of people in the region. Originally, the charges were dismissed, but with the company’s check in hand, the state recharged these and other activists.

Judge Merrick tried to prevent out-of-state lawyers from assisting the Water Protector Legal Collective, the Indigenous-led legal team. In an Oct. 19 statement following the trial, the collective stated: “We see this decision as his attempt to send a message that people will face harsh sentences regardless of innocence or guilt as a means to put pressure on others with pending charges to take pleas or forgo trial. The prosecutorial discretion and conviction of some and not others has been arbitrary and targets what police and state’s attorneys call agitators.”

Despite these sentences, the water protectors remain committed to the struggle. A statement from the Indigenous-led Freshet Collective on Oct. 19 quoted Eddie Bad Hand, who was acquitted at the same trial: “These people were not guilty, regardless of what [the state] said. No one should be found guilty.”

Bad Hand urged his fellow water protectors to “stay strong. Continue to stand and keep believing in what you stood for.”