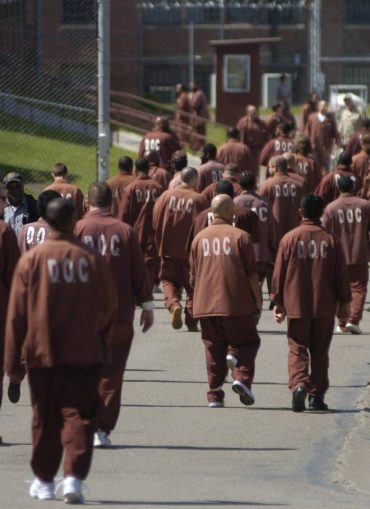 A previous DOC letter to Workers World Publishers on Sept. 11 stated: “The August 31 issue of Workers World newspaper has been denied to all inmates housed in Pennsylvania prisons.”

Their reason: The issue contained articles that “call for people to join the fight against white supremacy.”

This was the fourth issue of WW denied to Pennsylvania prisoners since Donald Trump’s election. Earlier this year, the DOC censored issues numbered 7, 12 and 13 for advocating a May 1 global general strike.

The Oct. 13 DOC letter identified the prisoner denied the right to receive our newspaper as imprisoned at Smithfield Prison.

Coincidentally, several Philly comrades visited Smithfield on Oct. 12 to speak, by invitation, to a Muslim group of prisoners. When the comrades tried to bring a bundle of WW newspapers into the prison, officials opened up an issue and said they were banning it because on page 2, the headline of our own article said WW was banned: “Pennsylvania prisons ban WW for supporting ‘fight against white supremacy’.” (www.workers.org/2017/10/02/)

No matter what the comrades argued, the prison official would not allow the papers inside.

Workers World has as much right to be read by prisoners as any other newspaper or magazine, and especially so because its articles are written by activists in on-the-ground leading positions in diverse people’s movements.

$50 for each issue denied

WW Publishers filed an appeal of the original ban on Sept. 26, demanding that the DOC cease this unconstitutional practice for future issues; give each prisoner the WW copies that were denied to him or her; and make each inmate “whole” whose constitutional rights were denied by compensating them $50 for each issue withheld from them.

The DOC’s Oct. 13 letter does not mention the demand that prisoners be compensated.

Workers World has since received a copy of another prisoner’s grievance, which demands that the Pennsylvania DOC “reimburse me a total of $50.00 into my account. My constitutional rights were impinged upon by censoring me from receiving this publication.”

Workers World shared the DOC’s Sept. 11 denial letter widely in social media so the public at large could view the white supremacist attitudes of the prison administration expressed outright in their own words.

Our loved ones behind bars in this state are subjected to those racist attitudes and actions every day.

WW urged activists to send complaints to the DOC in Mechanicsburg, Pa. Reporters from The Guardian, Newsweek and other media outlets reached out to WW for confirmation and comments. Many expressed initial disbelief the DOC would be so blatant in their support for white supremacy until they saw the facsimile of the letter.

The social media campaign forced the DOC to reverse course. But until each prisoner is awarded $50 for being denied the time-sensitive publication, we do not consider the matter closed.

Nevertheless, our campaign was successful not only in overturning the DOC denial but also in supporting the prisoners’ right to Marxist literature, in getting the word out in social media about Workers World Party, and in exposing the Pennsylvania DOC’s racism and cruel punishments once again.

After all, this is the same incarceration system that denies hepatitis C medicine to prisoners.

The Pennsylvania DOC imprisons political prisoners Mumia Abu-Jamal, Bryant Arroyo, Russell “Maroon” Shoatz, Major George Tillery and others who have contributed to peoples’ movements for liberation despite being held behind bars. Their wisdom and courage are sorely needed on the outside.

And now many people have become aware that the DOC also tries to censor what inmates are constitutionally allowed to read.

The DOC admission that its banning of an issue of Workers World was wrong may be a long way from tearing down the cruel walls of Pennsylvania’s dungeons. But it’s another chip in their façade, revealing the foundation of oppression.