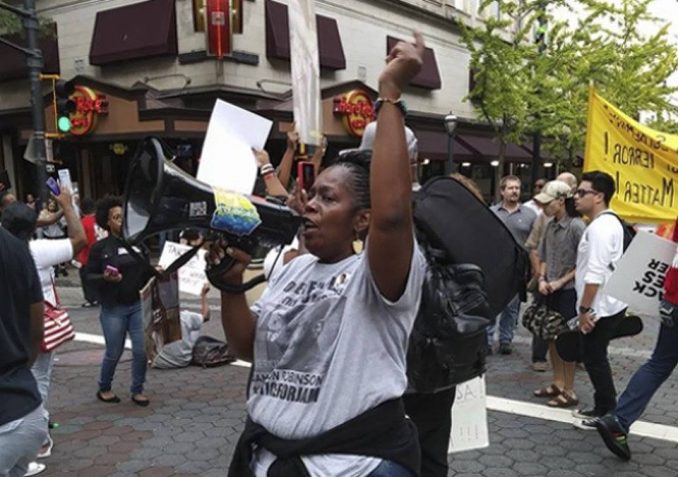 Atlanta — National Stop Police Brutality Day was the culmination of a weekend of events here on Oct. 19-22, bringing together family members of people murdered at the hands of the police, as well as community organizers from Atlanta, Ferguson, Mo. and St. Louis. On Oct. 22, demonstrators gathered outside the CNN Center in downtown Atlanta with large banners and signs declaring “Black Lives Matter.”

Jamarion Robinson’s mother and family carried large photos of the devastating damage done to his body, pierced by 76 bullets fired by U.S. Marshals in 2016. Other participating mothers were Felicia Thomas, whose son Nick Thomas was killed by Cobb County police at his job in 2015; Montye Benjamin, whose son Jayvis was shot in 2013 by police in Avondale Estates; and Patricia Scott, whose son Raemawn died in the Fulton County jail in 2003. All have been steadfast in demanding accountability and truth in their children’s deaths.

The demonstration coincidentally occurred as largely white crowds were flocking to an Atlanta United soccer game in the nearby stadium. There were some expressions of support and a few hostile remarks, but the mostly nonresponsive passersby intent on getting to the game reflected sharp racial and class divisions, and the complex relationship of sports to oppression and exploitation.

Just down the sidewalk at CNN, a group of Kurdish people, waving flags and carrying signs, were demanding open immigration for Kurdish refugees impacted by repression in Turkey and war in Syria and Iraq. At one point, in a show of solidarity, the two crowds became one. Mothers of the slain and Kurdish women then took turns addressing the crowd.

Another significant moment was a presentation to the five Kennesaw State University cheerleaders who have “taken a knee” in protest of police brutality. They were given plaques in recognition of their brave acts in openly hostile Cobb County.

The closing element of the day was a march through downtown Atlanta.The demonstrators took to the streets, holding up traffic and calling for people to get “off the sidewalks and into the streets” and join them. People lining the sidewalks and in their cars showed support with raised fists and cheers. Several restaurant workers left their jobs to come out and “take a knee” as the protest closed down intersections on Peachtree Street.