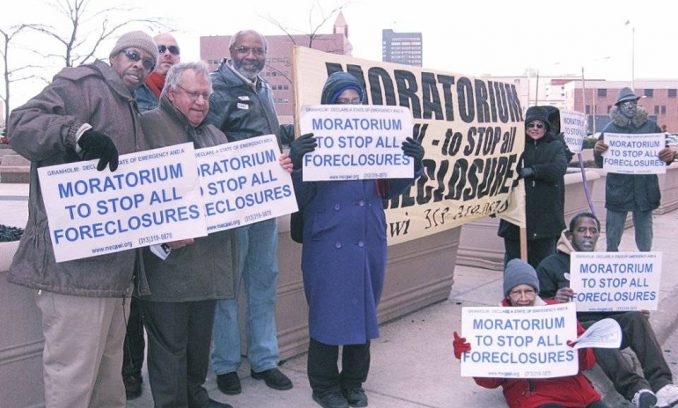 The World Conference of Mayors is convening its 33rd anniversary conference in Detroit from Oct. 23 to Oct. 26. Was Detroit picked to host this event because of its dramatic population loss, record poverty and unemployment, mass home foreclosures and water shutoffs? Because of the racism and devastating austerity visited upon this majority African-American city?

Not at all. Detroit was chosen for this international conference because of the alleged “exemplary leadership of Mayor Mike Duggan and his administration,” which “transformed Detroit into a city of extraordinary opportunities and possibilities,” according to wcmdetroit2017.com.

The Moratorium Now Coalition says the city was picked to host the WCM’s International Trade and Investment Conference because of a development resurgence in which “public revenues generated through … taxation are being funneled to the capitalist corporations” and banks.

Downtown Detroit has been gentrified. Sports arenas and commercial venues have proliferated at city taxpayers’ expense, while the neighborhoods and residents are forgotten and left to fend for themselves.

Once the hub of the world’s automobile industry, with a population over 1.8 million, Detroit now has fewer than 673,000 residents. The population was decimated after two capitalist tsunamis flooded the city. The first occurred in the late 1970s and 1980s when the auto industry restructured by deliberately targeting the Black autoworkers and closing virtually every plant in the city.

The second crisis hit in the early 2000s and accelerated the population loss and leveling of the neighborhoods. This was the racist, predatory subprime mortgage scheme and subsequent bankrupting of the city caused by the banks and financial institutions with the collusion of all levels of government.

According to Moratorium Now, more than 1 in 3 Detroit homes were foreclosed between 2005 and 2015. Since 2005, 139,699 of Detroit’s 384,672 homes have been foreclosed because of home mortgage defaults or unpaid property taxes. The city has approximately one-third fewer occupied homes than it did just a decade ago. Detroiters once had the highest rate of homeownership in the U.S., but now, abandoned and vandalized homes and other structures are the norm.

To bring to light the real situation facing the city and its residents, a “Real Detroiters Speak Out” event is being organized by an array of activists under the leadership of the Moratorium Now Coalition. They are inviting mayors from around the world to attend and hear directly from the people of Detroit. They are also planning tours of the neighborhoods so the invitees can see the corporate disaster imposed on the people of Detroit and “what the future holds for every major city if the banks get their way.”

The call by organizers says their alternative event “will fully expose the role of the banks, multinational corporations, the business media and political comprador elites in perpetuating the superexploitation of the people of Detroit. …The People’s Summit will discuss a real agenda for the rebirth and rebuilding of our neighborhoods and communities. Real development in Detroit would focus on the rehabilitation of neighborhoods, and the guaranteeing of jobs, housing, water services, heating and quality education for all. The banks that are responsible for the destruction of our neighborhoods must be held accountable through criminal prosecution and the payment of reparations.”