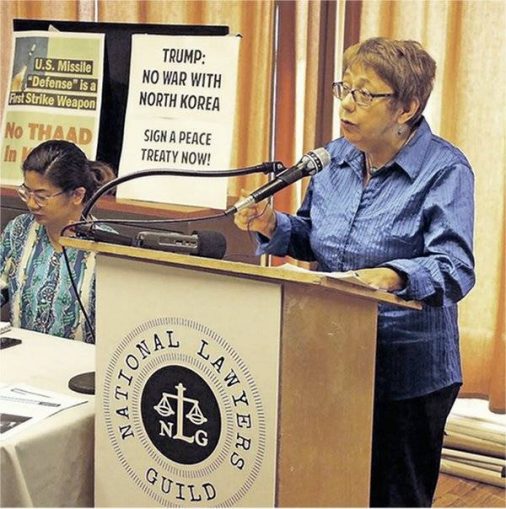 Oct. 18 — Today, representatives of the International Committee of the National Lawyers Guild and anti-war organizations held a news conference at the Solidarity Center in New York City.  They called President Donald Trump’s threats against north Korea — which he made at the United Nations in September — a criminal act not only by international law, but by U.S. law.

Jeanne Mirer, co-chair of the NLG International Committee and president of the International Association of Democratic Lawyers (IADL), quoted the United Nations charter, noting, “all nations are required to refrain in their international relations from the threat or use of force against the territorial integrity or political independence of any state or in any manner inconsistent with the Charter.” Mirer said that the U.S. Senate had approved the U.N. Charter by a 89-2 vote, thus making it U.S. law.

The Rev. Tong-Kyun Kim of the Least of These Church [The Korean Progressive Church], urged the U.S. to “take the path to dialog and peace,” and  “stop all war provocations.” He said the U.S.’s refusal to “give up its hostile policy” toward north Korea was the root cause of the ongoing tensions.

Sara Flounders of the United National Antiwar Coalition said, “the permanent state of war” that the U.S. had imposed on the Democratic Peoples Republic of Korea since 1950, the “occupation of the south” and the “militarized massive war games” the U.S. held on and near the Korean peninsula were the causes of the danger.

Bernadette Ellorin of the International League of Peoples Struggles expressed her organization’s “solidarity with the DPRK and the Korean people in asserting their national sovereignty.” She said that country’s nuclear program was “self-defense against U.S. aggression to keep from being an easy target, such as the U.S. found in Iraq, Syria and Libya.”

Christian Cobb of the International Action Center said his organization “stands with the DPRK” and against “President Donald Trump’s call for genocide.”

Jackelyn Mariano, co-chair of the NLG International Committee, introduced and moderated the event.

In reply to a question from this Workers World reporter, the groups discussed anti-war actions that are set to take place in different countries in early November to coincide with Trump’s trip to Asia. On Nov. 4, people in south Korea will protest Trump’s visit and the military buildup in the region. Philippine organizations are planning a mass protest a few days later when the U.S. president participates in a meeting of the Association of Southeast Asian Nations (ASEAN), at the site of the former Clark Air Force Base near Manila.

The organizations at the news conference said they would coordinate their actions in the U.S. in solidarity with the Asian-Pacific protests during that time period.  Organizers also distributed pieces written by Marjorie Cohn, former president of the NLG and IADL deputy secretary-general, including an article entitled, “Trump Threatens Genocide, Crimes Against Humanity in North Korea.” (Read at Truth-out, Sept. 29)

A video of the news conference is available at https://youtu.be/tLB8TvLj8Tw.