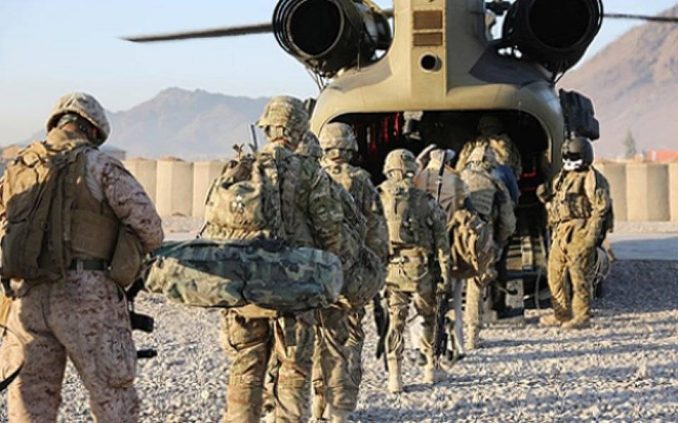 If anyone made the mistake of thinking that racist, misogynist and xenophobic president #45 is going to make war less likely than would the neoliberal neocons in the Democratic Party, they should be going through a period of serious rethinking right now.

On top of its extreme threats against Korea, its announcement that the U.S. Embassy in Cuba would close, the continued encirclement of Russia by NATO and the escalated sanctions against Venezuela, the Trump administration has now moved to extend the U.S. occupation of Afghanistan for at least another decade.

The most obvious move was the news that the “Green Zone” in Kabul, the Afghan capital, would be more than doubled in size. While the administration hasn’t said it explicitly, this news is an admission that the last 16 years of war the U.S. government unleashed in this Central Asian country have failed to install a puppet regime able to defend the capital.

What this latest news promises is more horror for Afghanistan. What is called for is a movement in the U.S. to end the occupation.

According to the Sept. 16 New York Times, “The expansion [of the Green Zone] is part of a huge public works project that over the next two years will reshape the center of this city of five million to bring nearly all Western embassies, major government ministries, and NATO and American military headquarters within the protected area.

“After 16 years of American presence in Kabul, it is a stark acknowledgment that even the city’s central districts have become too difficult to defend from Taliban bombings.

“But the capital project is also clearly taking place to protect another long-term American investment: Along with an increase in troops to a reported 15,000, from around 11,000 at the moment, the Trump administration’s new strategy for Afghanistan is likely to keep the military in place well into the 2020s, even by the most conservative estimates.”

Along with this news was the announcement a day earlier that the CIA was pushing to take over the drone bombing campaign from the Pentagon. This wouldn’t change the lethal nature of these attacks on Afghan civilians. It would merely conceal them.

As a Sept. 15 Newsday article points out: “If the CIA is ultimately granted the authority to operate in Afghanistan, it could potentially conduct strikes that accidentally kill civilians, but it would not have to acknowledge them. … Some Pentagon officials reportedly fear this could place U.S. troops in danger because drone strikes have been known to increase animosity toward the U.S., especially when civilian deaths occur.”

Given the almost universal “animosity toward the U.S.” among the people of Afghanistan after 16 years of occupation, plus another 23 years of lethal intervention, the “Pentagon officials” may be hiding their real reason for opposing this new division of labor. Each department of U.S. global rule wants its budget to grow and hates to give up its connections to the big money in the military-industrial complex.

Time to step up the protest

People have protested drone attacks from Kabul to Ramstein Air Force Base in Germany — a worldwide center for U.S. drones — to Syracuse, N.Y., another hub for the murderous, pilotless bombers. A CIA takeover would keep the attacks secret from the protesters, although not, obviously, from their victims.

Now that the unpopular Trump administration has taken ownership of the war on Afghanistan, it is an excellent time to step up the protest of this occupation from within the U.S.

A coalition of antiwar, antiracist, social justice and community-based groups in the U.S. that have opposed this war over the years has called for a protest demonstration on Oct. 7 in New York City. For information on a Sept. 20 planning meeting, see the Facebook page at tinyurl.com/ycvjygq6.