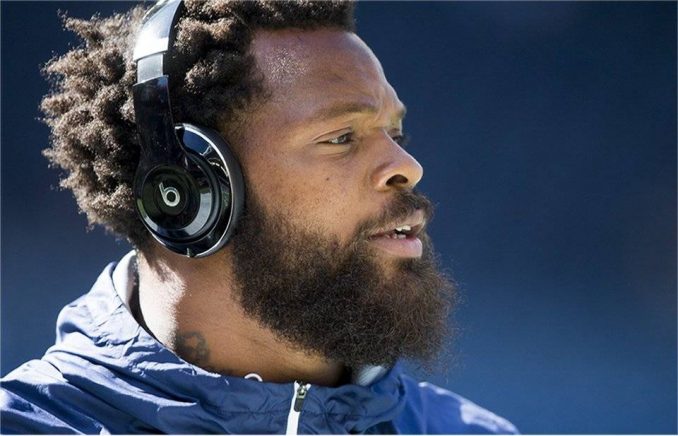 Michael Bennett is a six-foot-four, 270-plus-pound, 31-year-old defensive end for the National Football League’s Seattle Seahawks.  He has been selected to the Pro-Bowl twice and is a Super Bowl champion.

Bennett is also an African-American and socially conscious athlete who has been very outspoken against racist injustice, especially police brutality, and for gender equality, Palestinian and Indigenous rights.  Bennett not only talks the talk but also walks the walk.

He has been highly vocal in defending former San Francisco 49ers quarterback Colin Kaepernick, sitting by himself during the national anthem in 2017 preseason games.

Bennett recently organized a fundraiser and rally for the family of Charleena Lyles, an African-American mother of three, fatally shot seven times by Seattle police earlier this year. Lyles was four-months pregnant at the time of her murder.

Most recently, Bennett became a direct survivor of police brutality.

After a much ballyhooed fight between Floyd Mayweather and Conor McGregor in Las Vegas on Aug. 26, Bennett, who attended the fight, was thrown to the ground, kneed in the back and handcuffed by two Las Vegas police officers. Video footage shows a gun pointed at his head by one of the cops threatening to arrest him. (TMZ.com)

Bennett is heard asking what he had done to warrant such treatment. In a “Dear World” Twitter letter disclosing the incident, Bennett stated that the police officer threatened to “blow off his fucking head” if Bennett moved. Several hundred people, including Bennett, had run for cover when gunshots were thought to be heard nearby, but no shots had been fired. Only when the police discovered Bennett’s identity was he released.

Bennett and his lawyer, John Burris, a civil rights attorney who represented the family of Oscar Grant, a young Black man murdered by a Bay Area Rapid Transit cop on New Year’s Day 2009, have demanded the release of the two arresting officers’ names and of all related video footage. Both Bennett and Burris announced plans to file a civil rights violation lawsuit and to demand an independent investigation of the Las Vegas police.

When Bennett announced the incident on Sept. 6, Kaepernick responded: “This violation that happened against my Brother Michael Bennett is disgusting and unjust. I stand with Michael and I stand with the people.”  (Twitter)

Kaepernick is viewed by many as a modern-day Muhammad Ali, for protesting racist police violence by kneeling during the national anthem for the entire 2016 NFL season. His action sparked many athletes from diverse sports — amateur and professional, regardless of age, gender and gender expression — to do the same.

No NFL team has yet signed Kaepernick since he opted out of his contract with the 49ers. This whiteballing of Kaepernick by NFL owners has generated calls to boycott the 2017 season.

Seahawks’ coach Pete Carroll and NFL Commissioner Roger Goodell have expressed support for Bennett, but have not connected Kaepernick and Bennett’s actions. This is not the case for the Las Vegas police.

In their public letter addressed to the NFL, the Las Vegas Police Protective Association Metro Inc., stated: “While the NFL may condone Bennett’s disrespect for our American Flag, and everything it symbolizes, we hope the League will not ignore Bennett’s false accusations against our police officers.” Steve Grammas, president of the association, underlined the cops’ right-wing attack by demanding the NFL “investigate” Bennett. Goodell stated no investigation would take place.

Bennett said in his Twitter letter: “Las Vegas police officers singled me out and pointed their guns at me for doing nothing more than being a Black man in the wrong place at the wrong time. … I have always held a strong conviction that protesting or standing up for justice is simply the right thing to do. This fact is unequivocally, without question, why before every game I sit during the national anthem — because equality does not live in this country and no matter how much money you make, what job title you have, and how much you give, when you are seen as a ‘n—-er’, you will be treated that way. The system failed me. I can only imagine what Eric Garner, Michael Brown, Trayvon Martin, Tamir Rice and Charleena Lyles felt.”

In a press conference, Undersheriff Kevin McMahill stated that “race was not a factor” in targeting Bennett because the two arresting officers were “Hispanic.” Teresa Gutierrez, a long-time Latinx national leader of Workers World Party, commented: “For this cop to play the race card is disgusting and nothing new. Once a person puts on a police uniform, no matter their nationality, they are trained to racially profile people of color and occupy their communities. This kind of racist dehumanization can be traced back to the days of slavery, the legacy of which lives on today. We are in an ongoing struggle against all forms of white supremacy.”

Gutierrez went on to say: “The racist targeting of immigrants by ICE and the Border Patrol, who are the police on a federal level, cannot be separated from how Black people are treated. Migrants, be they documented or undocumented, are constantly being threatened with raids and deportations.  This repression has deepened with Trump’s repeal of the Deferred Action for Child Arrivals, which targets at least 800,000 young people, born to undocumented parents in the U.S., with deportation.

“There is a police war against Black and Brown people — and that lays the basis for building Black and Brown unity. I know I speak for millions of immigrants in expressing my total solidarity with political Black athletes like Michael Bennett and Colin Kaepernick, who are risking their livelihoods and even their lives by tackling racism.”

When the Seattle Seahawks and the Green Bay Packers met at the Sept. 10 season opener, Michael Bennett continued to sit during the national anthem, while his brother, Martellus Bennett, a Packer player, raised his fist.

When Martellus heard about the Las Vegas incident, he said to Michael on Instagram: “The emotion and the thought of almost losing you because of the way you look left me in one of the saddest places ever. I’m sad that you have to share this type of experience with the world but at the same time I’m happy that … you lived to talk about it because we all know you’re going to talk about it. The conversation is growing and I’m glad your voice is one of the ones being heard.”

Michael Bennett Sr. remarked that his son’s experience brought back the painful talk almost all Black parents are forced to give their sons on reacting very cautiously when stopped by the police. He emphasized this is why Kaepernick and his son Michael Jr. are so outspoken.

“When you don’t have to give your speech to your 16-year-old African- American son or your 15-year-old Hispanic son, when you no longer have to give that speech so that they can survive, we’ll know we’ve finally come a long way as a society. That’s why they’re kneeling.” (Sports Illustrated, Sept. 6)

This incident and the Las Vegas police response emphasize once again that when conscious athletes speak out and take a bold action against racist oppression, their voices resonate throughout all sectors of society.

Kaepernick and Bennett forcefully counter the reactionary argument that athletes should just shut up and play ball.