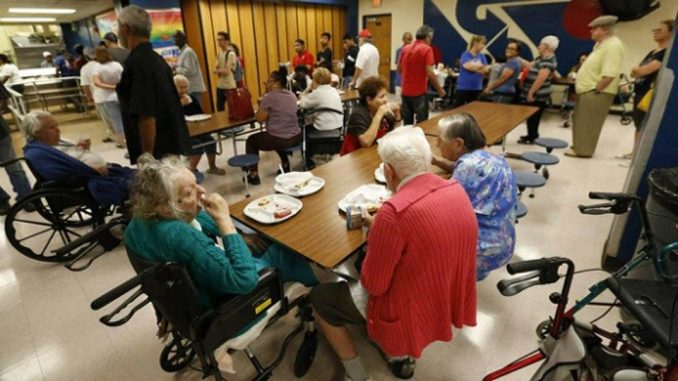 As of Sept. 11, people around the world have read millions of words and seen extensive television reports and photos of the devastation Hurricane Irma has caused throughout the Caribbean and, because of the storm’s mammoth size, across the entire Florida peninsula.

This article concentrates on the impact on the 3 million to 6 million, out of Florida’s 20 million people, who are least likely to have the means to self-evacuate, especially after the last-minute shift in Irma’s direction.

More than 3 million people in Florida live below the national poverty level. Another nearly 1 million live in mobile homes — if these homes still exist, since they can’t resist high winds. More than 1.6 million are older than 75, and about half are considered to have disabilities. More than 150,000 live in nursing or assisted-living facilities. Another nearly 100,000 people are in jails or prisons. If the Texas experience with Hurricane Harvey serves as an example, prisoners may be abandoned should the prisons be flooded or run out of food.

Florida’s Gov. Rick Scott ordered — but did not organize — the evacuation of 6 million people.

Darlena Cunha wrote in the Washington Post on Sept. 8: “I’m not leaving my home in Gainesville, in north-central Florida. I can’t. … Florida has only two main roads: interstates 95 and 75. They are parking lots, and have been for days. People are sitting in their vehicles, completely stopped on four-lane highways, running out of gas. …

“Meaningful evacuation would have meant public transport, safe shelters along the way, medical help and facilities throughout, and safe shelter, food, water and sanitary supplies on the other side of it all. For free.”

Reuters reported on Sept. 9 from Estero that Sheryl Estes, released from a hospital days earlier and still suffering the aftereffects of an automobile accident, sought relief in the Germain Arena, “a sports and concert venue in the state’s southwest corner. … The shelter offered hot dogs but no medical care.”

According to a Sept. 10 New York Times article, “By Sunday afternoon, more than half of the 45 shelters in Hillsborough County, which contains Tampa, had filled, including a shelter for people with special medical needs that had sprung up on the floor of the Sun Dome arena at the University of South Florida. There were nearly 800 people there, including patients, volunteers, nurses and doctors, and they were out of cots and pillows. Mike Wagner, the shelter manager, had to tell a woman and her family there was no room.

“‘We just had to tell her, you have to go back home and hunker down,’ Mr. Wagner said. ‘It’s a patient with five family members and a pet. It’s a sad state of affairs, but you have to draw some limits.’”

Gov. Scott said 1,000 nurses were needed, but resources to feed and care for such caregivers were lacking. Volunteer Jenna Ferreira said: “I wish there was more information and training on how to volunteer. [The USF Sundome’s] physical capacity is 10,000 but they have a limit of 1,000 sheltered people. I assume this is because of a lack of trained staff. … I’ve talked to a lot of elderly and disabled people who were scared. Several hadn’t been to the store yet. I wish there was a way they could register and either government employees or volunteers could help them prepare.” (Fight Back! News, Sept. 8)

This article also makes the point: “The police of central Florida have proven to be equally unhelpful, and even more harmful. One of the communities that is the most heavily affected by the local government is that of undocumented immigrants.”

Just as in Houston, throughout Florida many ordinary citizens and their organizations provided volunteer help. One volunteer, Ahmed Youssef from the Islamic Society of Tampa Bay, told National Public Radio on Sept. 10: “We just built a new building that is sustainable to withstand up to a Category 5 hurricane. And we thought about, why can’t we open our doors to the community?

“Since a lot of shelters are checking immigration status, different backgrounds, we wanted to welcome everybody in to show [our] support and unity of the Tampa Bay community.” Even here, with the best of intentions, the building’s 650 places were quickly filled. Youssef added that “one of the hardest moments of my life is to turn people away mid-storm.”

The lapse, though, is not Youssef’s. It’s the failure of capitalist U.S. society and the right-wing Florida government that didn’t care for those who need help the most.