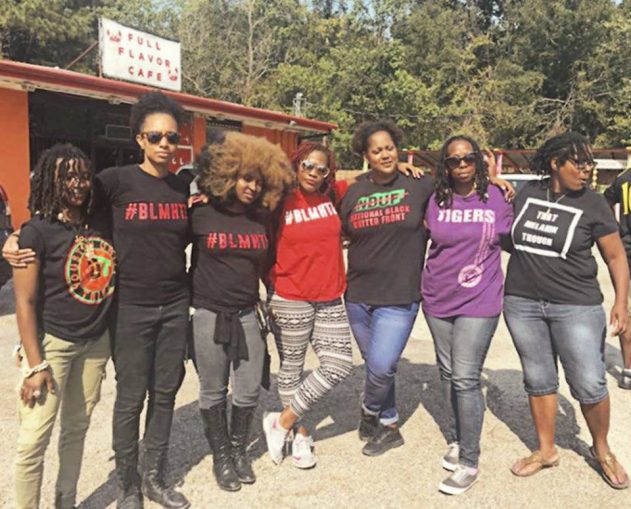 Houston, Sept. 4 — The flood waters have not receded in parts of southwest Houston. Cities near the Louisiana border are still flooded. Things are easing up, but it’s certainly not over and won’t be for a long time.

As I write on Labor Day, I am reminded of Dr. Martin Luther King’s quote, “All labor that uplifts humanity has dignity and importance and should be undertaken with painstaking excellence.”

I’ve seen a young selfless undocumented man who was helping rescue people. No one asked for his papers then. He drowned yesterday, and tears for someone I didn’t know came flooding down. His labor was appreciated by many, except for the president, the governor and the right-wing, anti-immigrant crusaders.

Folks walk down my street with lawnmowers, trying to make a dollar. I’m getting Facebook messages and phone calls about donating and/or distributing cleaning supplies, water, food, diapers, wipes and formula. The needs are massive. Many need wet carpet and sheetrock ripped out.

I just spoke to Shaka Sankofa’s elderly mother, Elnora Graham — Sankofa was an innocent man executed by Texas in 2000. She was relieved that someone helped get wet carpet out of her aging wood frame house. 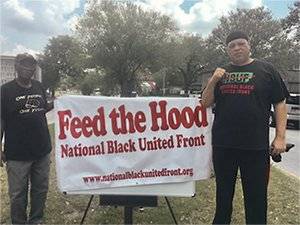 Northeast Houston on Sept 1. Many homes were flooded with no aid in sight. Members of community organizations went door-to-door giving out supplies and cleaning up.

There’s a lot on TV about Red Cross aid, but there are also people who have no paid staff, no funding, but are doing heroic work in the most oppressed communities. The National Black United Front here regularly does “Feed the Hood” events. So when they asked, donations came flooding in from around the country, including two full 18-wheelers from Dallas. Along with Black Lives Matter, RBG Unity and the JOHARA Initiative have worked for four days straight in the heat, humidity and mud to clean homes, feed people and leave them with water and supplies.

Today the Nation of Islam was in northeast Houston giving out water and supplies. Local rap artists Paul Wall, Slim Thug and Z-Ro joined them, attracting a crowd. The Brown Berets de TejAztlan are collecting donations to distribute in neighborhoods overlooked by mainstream agencies. (tinyurl.com/HarveyTejAztlan)

On Houston’s east side, where all the oil and chemical refineries are located, up to 1,000 tons of pollutants are now in our air, soil and water. In Crosby, the Arkema chemical plant burned off the remaining trailers of decomposing chemicals that were supposed to be kept under refrigeration. Once their electricity flooded and the tanks warmed, several exploded last week.

Residents in a mile-and-a-half radius of Arkema, who had been evacuated, finally got to return to their flooded homes today to find the destruction. The French-owned plant wasn’t providing any details. Exxon and Shell refineries are attempting production again. Since the hurricane, gas prices have jumped almost 50 cents a gallon here.

The Sept. 2 Guardian reports: “A cocktail of nearly 1 [million] pounds of particularly harmful substances … have been emitted by more than 60 petroleum industry plants operated by ExxonMobil, Shell, Chevron and other businesses since the hurricane.”

In the same article, Bryan Parras, who lives in the East End area of Houston, was quoted: “It feels like someone has a hand on the crest of your nose and is pushing down on your nose and eyes. You start to get headaches, your eyes start itching, your throat gets scratchy. I noticed it going outside for just a second. And then I realized that the air conditioning was sucking it into the house.” 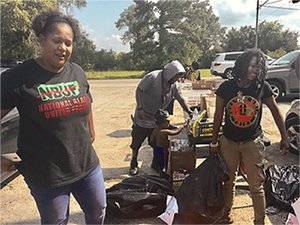 Parras has been a commanding force in the local environmental movement in the neighborhood he grew up in, where overwhelmingly Latinx and Black communities live next door to Houston’s petrochemical industry. People there report elevated levels of leukemia, asthma, cancer and other ailments.

“The Latino community here is full of good people. They do the dirtiest jobs and they don’t ask for much and yet they are over-policed, criminalized and targeted. These people have very little political power and the city knows it,” Parras told the Guardian.

Prisoners suffer from lack of planning

Prisoners are suffering because of the state and federal prison systems’ failure to plan for emergencies. Some prisons have been evacuated several times in the last few years. Yet it’s always the same — not enough water, no cots for evacuees and only peanut butter and bologna sandwiches.

According to prisoner and activist Nanon Williams, whom I visited yesterday, he and 580 other men are sleeping on a gym floor with ants, roaches and snakes crawling on them!

“The water is brown and oily and the rumor is that it has saltpeter in it,” Williams told me. “Officials say it is OK to drink. We need to be allowed to go to commissary and buy clean water, buy bleach and cleaning products for the porta potties because they are disgusting. We may get to commissary tomorrow but can only spend $10. The food here is unrecognizable and we want to buy food. We need toiletries and stamps, too.”

Williams asked people on the outside to call Warden Rocky Moore at 936-348-3751 and Region 1 Director Tony O’Hare at 936-437-1770, and tell them prisoners need clean water and the ability to buy what they need from the commissary. 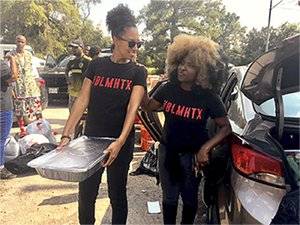 At the federal prisons in Beaumont, 90 miles east of Houston, conditions are worse. Rachel, the spouse of a man imprisoned there, told me, “They are only giving them eight ounces of water a day, two sandwiches a day since last Sunday. The [prisoners] are using the restroom in bags because the water that’s in the toilets is what they are drinking. People are fainting because of dehydration and no food. They have no air conditioning. It’s freaking hot in there. These are GROWN ASS MEN, not animals. They haven’t taken showers since last Sunday. … My husband is so dehydrated his eyelids were sticking to his eyes. His tongue was sticking to the top of his mouth.” This is the federal prison system where one of the Cuban Five, Ramón Labañino, spent several years. Political prisoner Ramsey Muñiz is in this prison.

The Houston metropolitan area is home to more than 600,000 undocumented people. The fear of deportation has prevented untold numbers of them from seeking help or going to centers during the flood. More than 26,000 people are registered under the Deferred Action for Childhood Arrivals program, and they now fear being deported if President Donald Trump ends DACA.

Houston ranks just behind Dallas and Atlanta in the number of deportations since Trump took office. Even Republican leaders are urging Trump to rethink deportations and ending DACA. They are concerned about their profits, of course, not the workers.

The one joy I’ve seen since Harvey is that working-class folks have done a massive job of rescuing people, without money or recognition. It’s the little neighborhood churches and community organizations; it’s places like S.H.A.P.E. (Self-Help for African People through Education) Community Center that are raising funds and helping people navigate the Federal Emergency Management Agency.

It’s immigrant organizations like FIEL, Familias Inmigrantes y Estudiantes en Lucha, who spend night and day organizing against reactionary Texas laws and are now aiding immigrants living in their cars. FIEL has invited people to their offices on Sept. 5 to hear Trump’s announcement on DACA. Then, they say, “We will make plans to follow our dreams.”