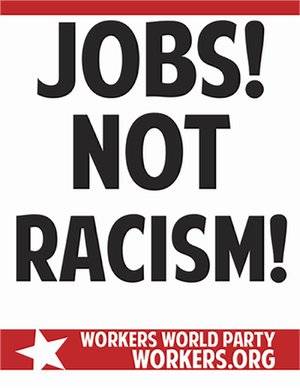 In January, just a few weeks into the new administration, AFL-CIO President Rich Trumka committed class treason when he joined Trump’s Manufacturing Advisory Council. He and AFL-CIO deputy staff member Thea Lee were the token labor representatives on the council, which included CEOs of 3M, Campbell Soup, Johnson & Johnson and other major corporations.

On Aug. 15, Trumka and Lee finally resigned from the council, citing Trump’s comments equally blaming both anti-fascists and white supremacist terrorists for the fatal violence in Charlottesville. “We must resign on behalf of America’s working people, who reject all notions of legitimacy of these bigoted groups,” said Trumka. (cnbc.com) His departure from the council only came after a number of big-business CEOs had resigned.

By Aug. 17, the president had dissolved the Manufacturing Council, as well as the Strategy and Policy Forum, in the wake of mass desertions by CEOs, including JPMorgan Chase’s Jamie Dimon, General Electric’s Jeff Inmelt and other capitalist luminaries. These key representatives of the ruling class, who have always used racism and bigotry to divide the working class, filled their resignation statements with phony platitudes about their commitment to diversity and lack of tolerance for bigotry.

Did they just discover the extreme bigotry of the 45th president of the United States? Were they asleep during the whole election campaign, when Trump whipped up mass hatred and violence against Muslims, Latinx immigrants, African Americans, women, LGBTQ people, people with disabilities and others? It took the murder of a white anti-fascist activist, followed by the most repugnant response imaginable from the head of the capitalist state, for these filthy rich hypocrites to distance themselves from the racist-in-chief.

The bigger question for labor is, of course, the conduct of Trumka. How could he justify taking a seat on this hideous council, knowing all about Trump’s bigoted rhetoric and the presence of open white supremacists in the cabinet?

The collapse of the two economic councils has to be seen in the context of the growing mass movement against white supremacy and bigotry. The CEOs and their labor flunkeys were feeling the pressure of this powerful movement when they made the decision to resign.

Trumka’s exit from the Trump council is a move in the right direction, even if pitifully inadequate and long overdue.

What needs to happen is for the AFL-CIO to make a complete break with class collaborationist policies. The AFL-CIO’s relationship with Trump — and that of the Teamsters, Building Trades and others — is the most extreme manifestation of collaboration with the capitalist U.S. ruling class.

But that break will not come from the top bureaucrats. The rank and file must revive labor’s proud legacy of militant, class-conscious and anti-racist unionism.