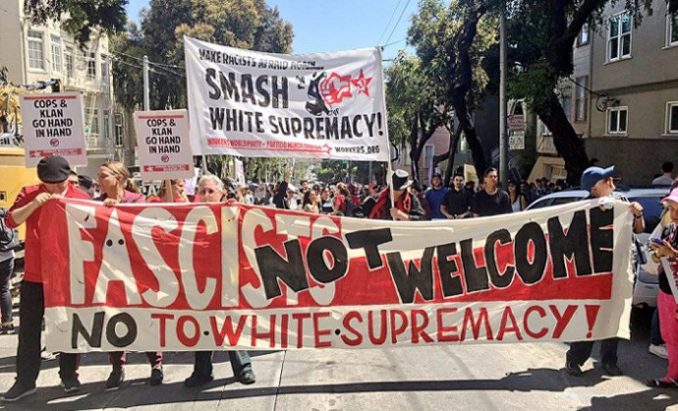 Well over 20,000 people showed up in the San Francisco Bay Area on Aug. 26 and 27 to let right-wing white supremacists and neo-Nazis know they are not welcome here.

Two rallies had been announced by fascist groups, one called by Patriot Prayer to be held in San Francisco’s Crissy Field, a national park. The other, titled “Say No to Marxism,” was called for Martin Luther King Jr. Civic Center Park in Berkeley. Both were canceled by their organizers less than 24 hours beforehand, as people from all over the Bay Area organized to prevent the fascists from having any platform here.

In San Francisco, the turning point came when International Longshore and Warehouse Union Local 10 passed a resolution opposing white supremacy and fascism, and some of its rank- and-file members organized a rally at Crissy Field. ILWU Local 10 has a large Black membership and a long history of taking action to oppose police terror, war, and apartheid in South Africa. Until then, the counter-rallies being called were at points far away from the planned Patriot Prayer rally.

Joey Gibson, the Patriot Prayer organizer, was probably planning on protection from Trump’s Department of the Interior, which controls Crissy Field. The feds had in fact set up a perimeter around Crissy Field, announcing they were going to bus in the Patriot Prayer rally-goers on one end of the park, and then set up a checkpoint at the other end.

After Gibson announced cancellation of the rally, he stated Patriot Prayer would instead have a press conference at Alamo Square, a residential district of San Francisco. Anti-fascist forces quickly changed their plans and gathered several thousand strong at the square, which had already been entirely closed off by police.

The anti-fascist crowd faced off with police for more than an hour trying to get to the square. Finally breaking through, they held a triumphant rally emceed by Benjamin Bac Sierra, a leader in the anti police-terror struggle in San Francisco. A contingent of electrical workers from the IBEW and the painters’ local marched in, chanting, “Up with the workers, down with the fascists.”

They then marched 2.5 miles to San Francisco’s Mission District. During the long and spirited march, more and more people joined in. These included thousands who had gathered at San Francisco’s Civic Center and more who marched from the Castro District.

The fascists were doing sporadic “pop-ups,” including a couple dozen at Crissy Field. They finally held their press conference in the city of Pacifica, south of San Francisco. Meanwhile, small groups of fascists were seen in the Haight area, trolling for people to harass.

The next day in Berkeley, thousands turned out again to oppose the white supremacists. For months the city had been the target of neo-Nazis, who seem to feel that if they can establish a platform in this notoriously liberal town, they can move freely anywhere in the country. The Berkeley police set up checkpoints going into the park where the rally was to be held and at Bay Area Rapid Transit station exits. They were trying to stop people from entering with masks, signs on sticks, helmets and weapons.

Anti-white-supremacist forces gathered at Hearst and California streets and marched to the park, with a contingent of about 200 Antifa forces moving to the front to provide security. The march swelled to several thousand.

The police, heavily armed with riot gear, initially had the entire park cordoned off. Several times they pointed their weapons toward the large crowd. Overwhelmed, they finally marched off, but only after arresting about a dozen people on such charges as wearing a mask. There were several skirmishes in which Antifa and others spotted fascists in the crowd and routed them out.

A large coalition of organizations, including the Anti Police-Terror Project, Community Ready Corps, Showing Up for Racial Justice Bay Area, Antifa, Bay Resistance, Arab Resource and Organizing Center, Interfaith for Black Lives, National Lawyers Guild SF, Haiti Action Committee, Workers World Party and many more pulled together to let the white supremacists know they would not be allowed here in the Bay Area.

Thousands of others gathered near the University of California campus in a “Rally Against Hate.” Ministers and clergy also marched from the First Congregational Church.

The media is again attacking Antifa, which was defending everyone from the fascist threat, and blaming its members for creating the violence.

At an Aug. 28 press conference, Tur-Ha Ak, from the Anti Police-Terror Project and the Community Ready Corps, said that rather than focusing on Antifa, the media needs to highlight how the Bay Area stood up to white supremacy. Lara Kiswani from AROC explained that we were defending our communities. Pastor Michael McBride stated that we need to look to history and elders to understand white supremacy. Sara Kershnar of NLGSF said it would defend those defending our communities.

Meanwhile, the power of the people was certainly on display in the Bay Area this week as unity and struggle beat back the fascist threat.