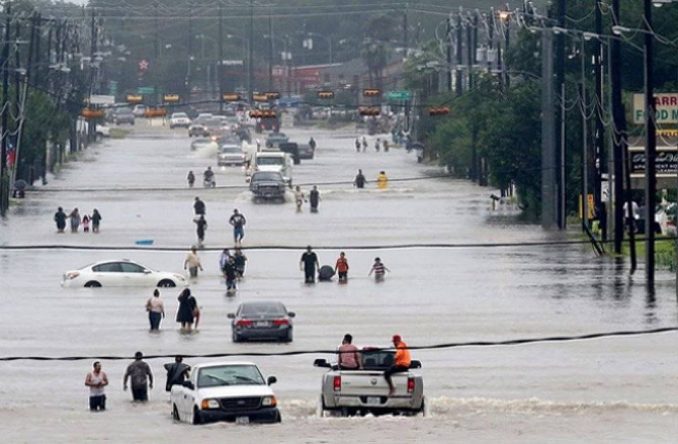 As of Monday evening, Aug. 28, 10 deaths have been reported since Hurricane Harvey hit the Texas coast near Corpus Christi three days ago as a Category 4 (very intense) storm. It ripped roofs off of houses, smashed trailers, uprooted trees and knocked down power lines.  Weakening as it moved inland, it began dropping a prodigious amount of rain and spawned a number of violent tornadoes.

According to the National Weather Service, so far the rain from Hurricane Harvey has been “unprecedented.” Parts of southeastern Texas have already received more than 30 inches, and some areas are forecast to get as much as 50 inches by the time Harvey, which has now weakened to a tropical storm, moves on.

President Donald Trump spent the weekend of Aug. 25-27 in Camp David, the presidential retreat in the Maryland mountains, tweeting about how successfully the federal government — the Federal Emergency Management Agency and the Department of Homeland Security — were dealing with the crisis in southeast Texas and how closely he was monitoring the situation.

Trump made no mention of the U.S. Immigration and Custom Enforcement identity checks that have been maintained on the roads  that are still open around Houston. ICE is even conducting surveillance operations in Rockport, a coastal city with a lot of destruction, according to an ICE photo album posted on Flickr.

in one tweet, Trump wrote, “Closely monitoring #HurricaneHarvey from Camp David. We are leaving nothing to chance. City, State and Federal Govs. working great together!”

In a later tweet, he wrote, “I encourage everyone in the path of #HurricaneHarvey to heed the advice & orders of their local and state officials. ”

This would be difficult, as there have been conflicting orders.

Houston Mayor Sylvester Turner tweeted on Friday afternoon, Aug. 25: “Please think twice before trying to leave Houston en masse. No evacuation orders have been issued for the city.” He urged people to shelter in place, saying: “You literally cannot put 6.5 million people on the road. If you think the situation right now is bad, you give an order to evacuate, you are creating a nightmare.”

However, Gov. Greg Abbott, who declared a state of disaster for 30 Texas counties, encouraged Texans in coastal areas to evacuate their homes on Aug. 25. He urged people in the Houston area to evacuate and head north.

In his press conference, Abbott announced that the state of Texas had 41,000 shelter beds available for evacuees and more than 200 buses available to transport Texans out of coastal areas. Camping in state parks would be free for the duration of the hurricane emergency. (Texas Tribune, Aug. 25)

If just those in the Houston area had followed his advice, these facilities would have been immediately overwhelmed.

Both Mayor Turner and Gov. Abbott assigned responsibility for evacuation to individuals.

But what about the homeless? According to a local homeless shelter in Corpus Christi, an estimated 8,100 homeless were in the city before Harvey hit. About 300 people were crammed into a shelter. There’s no information about what happened to the rest. (New York Times, Aug. 25)

Claiming that individuals are responsible for their own safety during a hurricane or other natural disaster ignores the fact that the old, the frail, the sick and the infirm do not have the capability to carry home four or five days’ food and water. Furthermore, diabetics need refrigeration for their insulin; the elderly can die when power cuts cause oxygen concentrators to fail.

The Democratic Party and the big media like the New York Times, Washington Post, MSNBC, CNN and NPR make the point that Trump’s tweets are designed to obfuscate and minimize the impact of his decisions to attack transgendered members of the military and pardon Sheriff Joe Arpaio, as well as distract from the chaos in the White House staff.

These charges of Trump’s skulduggery are likely correct, but they miss the essential point. The U.S. government and the states of Texas and Louisiana do not have any real plans for dealing with hurricanes like Harvey and for protecting the lives and the property of the people.

The projected cuts in Trump’s budget for Homeland Security and the National Weather Service will directly impinge on how states and cities prepare for national emergencies.

Trump wants to cut $667 million out of FEMA programs and grants that help cities and states prepare Pre-Disaster Mitigation Programs. He wants to cut the National Oceanic and Atmospheric Administration, which includes the National Weather Service and the National Hurricane Center, by 16 percent. Research on the oceans and the atmosphere, which strives to understand the effects of global warming, would be cut by 32 percent.

These cuts unmask the real reason behind the chaotic, unplanned response to Harvey: Trump and the big bourgeoisie don’t want to spend any money or effort to help the poor, the needy, the oppressed and the workers survive.