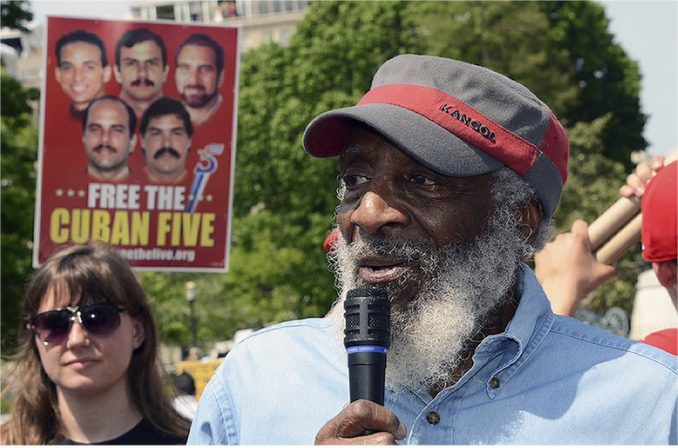 Dick Gregory speaks out to Free the Cuban 5, 2012, at the White House.

The following is excerpted from a conversation with Dick Gregory by WW West Coast correspondent and the 2004 WWP candidate for president John Parker on Nov. 28, 1996.

Gregory, the legendary, brilliant, socially conscious comedian who used humor to promote support for the Civil Rights Movement and against U.S. imperialism, died Aug. 19 at the age of 84.

He continued to speak out around the country against racist injustice until his death. Gregory was the first comedian to demand that African-American comedians not only perform their routines, but be interviewed by prominent talk show hosts like Jack Paar. Gregory went on numerous hunger strikes to protest the war in Vietnam, apartheid South Africa and police brutality and to support women’s rights, Indigenous rights and more. Gregory was a supporter of the 1974 historic March against Racism in Boston.

The major media tried desperately to debunk reports of the CIA’s role in trying to destroy the social fabric of the Black community with drugs and guns. Instead, all the major news media apologized for the CIA by blaming the Black community and calling some African-American leaders ignorant, paranoid and delusional. One of those under attack was Dick Gregory.

Workers World: After World War II, heroin addiction in the United States was almost completely wiped out. However, the fight against liberation movements abroad in the name of anti-communism helped build up drug syndicates in Southeast Asia, Italy and France, which in turn built the addiction level in the U.S. back up to pre-World War II levels. Heroin, especially in the Black community, made a major comeback during the Vietnam war. Vietnam veterans, in fact, will tell you that there were tons of money to be made carrying drugs stateside and how easy it was to obtain it for personal use in south Vietnam during the war.

Dick Gregory: Also during the 1960s and 1970s, gangs were being created. You see, what happened to the Black community here is worse than slavery. We were not blamed for slavery. It couldn’t be said that we performed the lynchings or that we burned the crosses or participated in the Klan killings. But this we got blamed for.

WW: They said we poisoned ourselves and that we were responsible for all the crack and the violence in the community.

DG: Right, because before now we didn’t have this type of physical evidence.

WW: In spite of the physical evidence, the media say it doesn’t exist and that we in the Black community are paranoid.

DG: Well, the last time I checked it wasn’t Black people who were talking about seeing Elvis on the corner or jumping out of windows from the voice of Orson Welles. Just ask yourself the question: Who owns NBC and ABC? The CIA was arguing for their right to keep CIA agents on staff for newspapers as journalists. …

But we can still win without the press. In the 60s they weren’t with us. In fact they were bashing us. Go back and read the press reports. When King said to march on Washington, they said it was a bad idea. When white students came out against the Vietnam war, the press wasn’t there, but we still won. We won with economic boycotts and prayers and fasting and by going to jail.

You see, the fight against Jim Crow was so hard because Jim Crow was legal — yet we still destroyed it. This should be a cake walk compared to that since what the CIA did is illegal. … These denials by the CIA and the FBI and papers are what is called ‘disinformation.’ The FBI and CIA have plants in these newspapers across this country.

WW: In Afghanistan the CIA was also caught promoting the heroin trade to fund its support for the anti-Soviet terrorist group there. Does drug selling seem to be a common tool of the CIA’s covert warfare strategy?

DG: It is also a slick tool because they will use that for the money that can be raised. You have to question where the money comes from. …

WW: Besides the desire to raise funds for covert war, why would the CIA help destabilize the Black community?

DG: First, if we look at the history of the CIA and FBI, they’ve been spying on Black leaders around the clock for years with the most advanced electronics. And with the sophisticated equipment they had they must have known when someone was sent to kill our leaders.

WW: When the Kerry Commission investigated the Iran-Contra drug/arms connections to the CIA, much of the most damaging evidence heard was during secret session for reasons of “national security.” One of the chief investigators, Jack Blum, said, “I am sick to death of the truths that cannot be spoken.” In view of the history of CIA denials of drug dealing in the past, do you expect anything to come out of the CIA investigation of itself?

DG: No. I think when they’re ready they will try to bury it in a congressional committee.

WW: Now it’s 1996 and all the damage is still being felt in our communities from the crack and the encouraged violence in our streets. Who is responsible?

DG: They talk about personal responsibility all the time, but when it comes to my turn to say who’s responsible the rules always change. The CIA is responsible for everyone murdered, every parent killed by someone on crack, every crack baby. The Black community must be compensated.