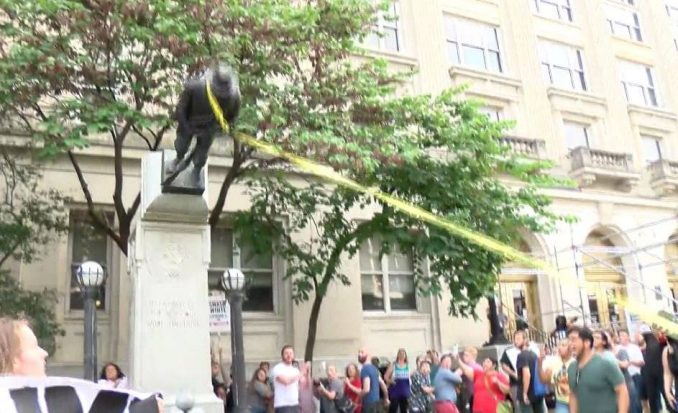 These are not memorials to some long lost ancestors. These are signposts to convey a simple, heinous message: white supremacy. That is why the murderous Klan and Nazis gather around them like carrion crows, backed up by cops, prosecutors, courts, legislators, governors and, of course, Boss Trump himself — all in defense of white supremacy

The brave North Carolina activists who tore down the Confederate soldier statue in front of the Durham, N.C., courthouse are being persecuted and prosecuted — because they defied white supremacy. Many were gravely injured in Charlottesville, Va., and a young woman worker was brutally murdered there — because they were dedicated to stopping white supremacy.

Most of the Confederate monuments were erected in the 1890s through the 1920s, when racist “Jim Crow” laws were put in place throughout the U.S. South.

The social and political gains of Black people had been dramatic after Emancipation and during Reconstruction. But they were cut short in 1877, when Wall Street and Northern politicians cut a deal with big Southern land, mill and mine owners who had supported slavery and secession. Federal troops were withdrawn, and white supremacy vigilantes like the new Ku Klux Klan were let loose to begin the arson, beatings, rapes and lynchings known as the “White Terror,” backed up by the courts and sheriffs.

At the same time, a powerful wave of propaganda was launched to romanticize and justify the white supremacist Confederacy. Racist lies and myths about a noble “Lost Cause” were spread through textbooks, popular songs, novels and movies, like the infamous 1915 “Birth of a Nation,” originally titled “The Clansman.” The U.S. capitalist establishment backed this white supremacist propaganda to reinforce its continuing war against Indigenous peoples and people of color both inside and beyond U.S. boundaries in newly launched imperialist wars.

This resurgence of white supremacy was a time when many Confederate monuments were set up, often to “guard” courthouses in the South. Then in the 1950s and 1960s, more monuments to white supremacy were built to counter the growing Civil Rights Movement. Thirteen more have been erected since 2000, and some are even being built today.

The equestrian statue of Confederate Gen. Robert E. Lee that racists and fascists rallied around in Charlottesville was put there in 1924.

The great historian W.E.B. DuBois exposed the meaning of all these monuments in 1928 when he condemned the sanctification of Robert E. Lee: “The New York Times may magisterially declare: ‘Of course, he never fought for slavery.’ Well, for what did he fight? State rights? Nonsense. The South cared only for State Rights as a weapon to defend slavery. …

“People do not go to war for abstract theories of government. They fight for property and privilege and that was what Virginia fought for in the Civil War. … It is ridiculous to seek to excuse Robert Lee as the most formidable agency this nation ever raised to make 4 million human beings goods instead of men.” (cwmemory.com)

These Confederate monuments are not just statues. They are lies about history turned into marble and brass. They are the embodiment of racist psychological terrorism. They are overseers looming over us, designed to protect and glorify white supremacy, and to maintain a capitalist system that uses racism to divide us from each other.

We have the right to pull these monuments down. The movement to remove them is growing. What about invader-colonizer Christopher Columbus next?