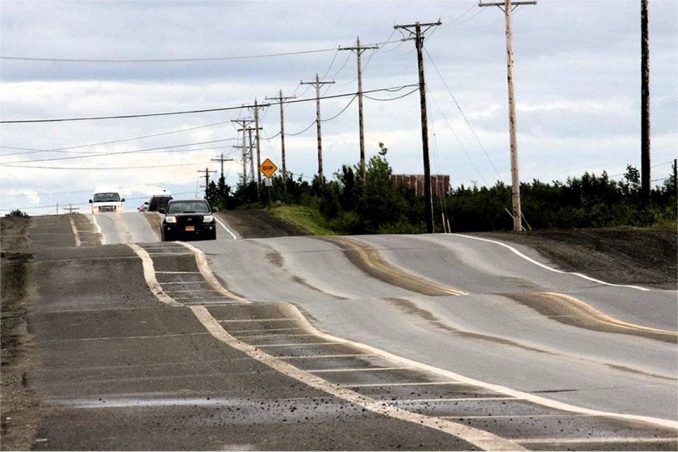 Anchorage, Alaska — The Arctic is heating up twice as fast as the rest of the world. As its ice and snow cover melt and its glaciers recede, the newly bared soil and waters retain more heat, thus reinforcing the melting. According to the Canadian weather service, some areas of the Canadian Arctic are warming up at four to five times the world average.

Critical components of the Arctic’s infrastructure most urgently affected by global warming are roads, which aid transportation of goods, services and people and facilitate communication between communities.

An ice road is a winter road that runs on a naturally frozen water surface — a river, a lake or an expanse of sea ice — in cold regions like major portions of Alaska and Canada’s Yukon and Northwest Territories. The roads can also be built overland by using ice chips.

Ice roads open up access to isolated areas that have no permanent roads. Some 80 percent of Alaskan communities — but not a majority of its population — live in so-called fly-in communities without road access to the rest of the state. Many of them are almost entirely Indigenous.

Some of these communities have a water connection and can get supplies like fuel oil or snow machines by barge. But most need ice roads to connect to the outside world.

The Canadian Arctic has 3,300 miles of official ice roads. This year a number of communities in the Northwest Territories nearly ran out of fuel for generators because global warming meant their ice roads had to be built later and melted earlier.

Even in the depths of winter, frequent storms and thawing made the roads dangerous with ice that was sometimes too weak. Alvin Fiddler, grand chief of the Nishnawbe Aski Nation, which represents 49 Indigenous communities in northern Ontario, told the New York Times, “These roads are the only way our people can survive.” (April 19)

There are a number of tweaks that can extend the usefulness of ice roads: using semi-submersible vehicles to clear off snow; spreading water from under the ice to layer it on top, making it thicker; and using ice-penetrating radar to accurately measure the thickness of the ice. But the only practical solution seems to be permanent roads.

The Indigenous communities are clinging to settlements that their ancestors established many years ago. They need a solution to preserve their homes and ancestral lands and to be able to get to mines and other job sites that need labor.

But permanent roads, which are expensive to build, have major difficulties due to permafrost. The frozen ground contains ice globs that melt at different rates, depending on how far they are below the surface. Such melting can open up big holes and slumps in the roads.

Bethel is a major town in western Alaska. It has a hospital and a fish-processing plant and is an administrative and transportation hub for the 56 villages in the Yukon-Kuskokwim Delta. It is off the grid and only accessible by river or air, but it does have an extensive local road system.

The paved roads in Bethel resemble a roller coaster because the underlying permafrost has melted in some spots and not in others. But guard rails, which keep slips and slides from being deadly, tend to vanish as the permafrost underneath them weakens.

Unpaved roads like the one from Tok through Chicken and on to Dawson have the same waves, and are also very dusty in the summer and hard to maintain in the winter.

Capitalism and the Big Melt

The science establishing that global warming is mainly due to human activity is now generally accepted. The Intergovernmental Panel on Climate Change warns that if this warming goes beyond 2 degrees Celsius above pre-industrial times, there will be deadly heat waves, extreme weather and catastrophic increases in sea levels.

What is just as established, but far less accepted, is that this warming is due to the capitalist drive for profits — quick, immediate profits at the expense of the environment and human life on this planet. Capitalism must expand or die.

The differences in approach to global warming between China and the U.S. are instructive. When the socialist revolution took power in 1949, China was terribly poor and underdeveloped. It has made big concessions to capitalism since then, but still has a strong socialist orientation behind much of its economic policies, particular in infrastructure.

China is now a world leader in renewable energy and is implementing economic plans that shift away from fossil fuels as quickly as possible. The U.S. capitalist government, by contrast, has withdrawn from the Paris Accords in order to remove any restraints on companies that profit from coal, oil and gas extraction.

The only truly permanent solution to the roads problem in the Arctic is to start the process of environmental sustainability, stop the production of heat-trapping gases and end global warming. These objectives can be only partially achieved under capitalism.