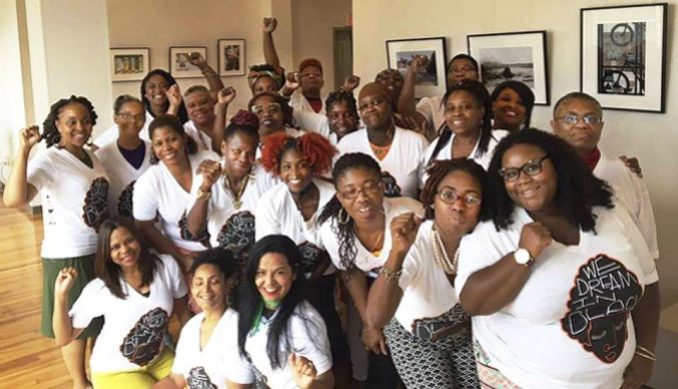 The staff of We Dream in Black, a program of the National Domestic Workers Alliance, July 25.

Seven extra months! That’s 19 months a Black woman had to work, on average, to earn the same wages a white man did in 12 months.

Those months are not an abstract quantity. Those are the arduous days and nights of someone like Priscilla Smith, who is a home care worker in North Carolina. Starting in mid-afternoon, on duty until midnight, Smith does difficult work, both physically and socially, assisting up to 20 people a day. She is paid $12 an hour, with no paid sick leave or vacation, and then comes home to care for her own four children.

Smith, a leader with We Dream in Black, a program of the National Domestic Workers Alliance, says: “The majority of people who do this kind of work are African-American or Latino women. The world needs to wake up and understand that Black workers need to be acknowledged, respected, and honored for their work.” (rewire.news, July 31) An even more severe wage gap exists for Indigenous women and for documented Latinas, who earn 54 cents for every dollar a white man makes.

There are 24 million Black women in the U.S., and 60 percent of them are part of the workforce. But they have high unemployment, imperiled job security, a lack of benefits and advancement opportunities, and are the fastest growing U.S. prison population. Black women work more hours than white women on average, and half of Black women workers are mothers. (Economic Policy Institute, July 28)

Famed and wealthy tennis star Serena Williams, speaking on pay discrimination against Black women workers, said: “If I [had] never picked up a tennis racket, I would be one of them. That is never lost on me. The cycles of poverty, discrimination, and sexism are much, much harder to break than the record for Grand Slam titles.” (fortune.com, July 31)

Those cycles are rooted in the exploitation of Black women during their enslavement in the U.S. They were not paid for excruciating, forced labor in field or house. Under severest duress, they gave birth to children who were sold into similar bondage. Both kinds of labor by Black women yielded heartbreak, physical torment and death for them — and untold fortunes for Southern planters and the allied Northern banks, insurance companies and businesses.

Black women’s unpaid labor — along with that of African-American people in general — was the foundation of modern U.S. capitalism.

But Black women have been fighting back against exploitation from their first days on this continent. In addition to rebellious resistance and self-liberation during enslavement, Black women started to do labor organizing in the South as soon as they were emancipated.

In 1866, Black women laundry workers presented demands to the mayor of Jackson, Miss., for a higher standard wage so that anyone belonging to the “class of washerwomen” could “live comfortably if possible from the fruits of our labor.”

In 1881 in Atlanta, 20 women and a few men formed the Washing Society to demand similar wage increases for their work. They quickly grew to 3,000 primarily African-American women, with a few white women workers also involved. On July 19, they called a militant strike, ultimately successful, and described by historian Tera W. Hunter as “the largest and most impressive among Black Atlantans of late 19th century.” (“To ‘Joy My Freedom: Southern Black Women’s Lives and Labors after the Civil War”)

The reward for centuries of fighting spirit and organizing by Black women should be more than equal pay. That would only bring their wages equal in the present year.

But for those centuries of exploitation and the profits made thereby, there should be reparations! Reparations for enslavement and forced labor, for the terrible damage inflicted by racism.