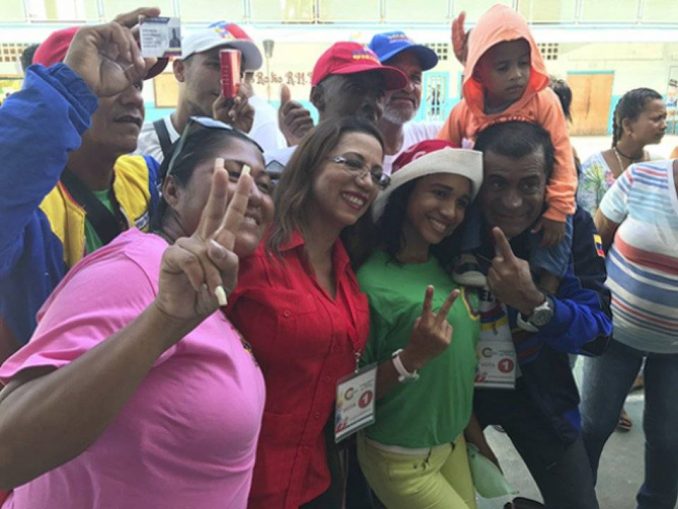 Voting for Venezuela’s new assembly: ‘All power to the people!’

The sound of trumpets at dawn on July 30 began a day of voting to elect delegates to Venezuela’s new Constituent Assembly. These delegates will take on the great responsibility of representing the people as they make changes to the current Bolivarian Constitution, established in 1999 under the leadership of the late President Hugo Chávez.

The Chavista and Bolivarian people came down from the hills, crossed rivers and went through mountainous roads on foot or by bicycle in order to cast their ballots. They overcame all obstacles imposed by the fascist opposition and resolutely voted for the Constituent Assembly.

The National Electoral Council and the relevant state bodies had established thousands of polling stations around the country, including contingency sites for voters who could not cast their ballots in their locality due to roadblocks — which included closures of voting stations by the counterrevolutionary forces. In fact, some sites in neighborhoods dominated by opposition administrations – mayors or governors hostile to the government – were unable to open. The largest alternate voting center in Caracas was the Polígono, where thousands of voters came to heroically challenge counterrevolutionary violence and cast their votes.

As of the evening of July 30, voting sites were still open, so voting totals were uncertain. Through different television broadcasts and digital social networks, however, it was easy to perceive the enormous enthusiasm of the people and see the huge lines that indicated broad popular participation.

Thanks to cyberspace, Workers World/Mundo Obrero was able to speak directly with people who conveyed that enthusiasm. Jacobo Torres, a representative to the Constituent Assembly from the industrial workers sector told WW/MO: “The people defeated terror and bet on peace. On July 31 you will see a beautiful Bolivarian, anti-imperialist and deeply Chavista dawn!”

Compañera Yosmary Guevara, national spokeswoman for the women’s organization UNAMUJER and coordinator of the Bolivarian Women’s Force, expressed the opinion of revolutionary women: “Today is a glorious day, where the people’s love overflowed in the streets. … It was the hour of the people, to defend the legacy of Comandante Chávez. We want no more violence, no fascism, none of the terrorism that is an integral part of the empire. The anti-imperialist and deeply feminist patriot women, who are Chavistas, are in permanent combat to propel our heroic people forward.”

A young citizen who walked to a polling place, Javier Ochoa from Yaracuy, summarized what millions also think: “Venezuela does not surrender. Today more than ever the struggle is vindicating the dignity of a people that says NO to capitulation and YES to peace. Venezuela continues to be an example of struggle in the region, for the world’s politically conscious peoples.”

Constituent Assembly: Power of the people

In general, the Constituent Assembly is a peaceful and fundamentally democratic political mechanism to resolve intense political crises, to change the Constitution for society’s improvement. The Venezuelan crisis is due to daily terrorist attacks by the fascist right wing — the most extreme elements of the right-wing opposition to the Bolivarian government — which has been trying to overthrow the government since April 1, sowing death, destruction and economic crisis throughout the country.

Article 348 of the current Constitution establishes the right of the Executive Power to convene a Constituent Assembly. President Nicolás Maduro called for this on May 1, during the celebration of International Workers’ Day.

The most significant aspect of this action is that the president summoned the sovereign power of the people, who will henceforth determine the future of the revolution. All power to the people!

This concept is extremely important. It is not a law imposed from above, or merely a remedy for the crisis. It is the search for a profound transformation of the foundations of the revolution — from the economy, based until now on income from oil, to the transformation of structures of the state. This is the crucial importance of the development of this Constituent Assembly. This is what is at stake.

In addition, the purpose of the Constituent Assembly is greater than seeking peace for the people confronted by fascist attacks. It seeks, among other things, to assure the achievements of the Bolivarian Revolution, by raising the constitutional level of the popular Missions that aid Venezuela’s poor as well as expanding the justice system to eliminate impunity for the rich and corrupt who commit crimes against the people and against the homeland in general — for example, corruption, smuggling, speculation, drug trafficking, etc.

These are crimes that the right-wing oligarchy commits against the poor. They run the gamut from the theft of U.S. dollars to subsidized, preferential prices for importing essential products, to hoarding of food, medicine and other goods. This rampant criminality is the cause of the shortages, which are intended to create an atmosphere of despair among the masses, in the hope that wear and tear will cause the people to rebel against the Bolivarian government.

Through a universal, direct, secret and free ballot, the July 30 vote will elect 364 candidates to represent the country’s territories as well as 173 for different sectors of the population. These sectors include workers, peasants, fisher people, students, people with disabilities, Indigenous peoples, retirees, small-business people, communes and communal councils. This representation of sectors is something very new and ensures the inclusion of the interests of each of these groups.

The counterrevolutionary right, however, does not act alone. Serving its true master, U.S. imperialism, the right has tried — without success — to reverse the Bolivarian process since Chávez’s ascension to power. We need to remember that the right followed up their failed coup of 2002 by sabotaging the oil industry in 2003. Well-known disbursements of huge sums of U.S. government money via the U.S. State Department and its agencies that promote destabilization on the continent, such as the National Endowment for Democracy and the U.S. Agency for International Development, have facilitated Venezuelan opposition organizations. A long list of hostile U.S. government policies toward Venezuela has been a constant, through all U.S. administrations, both Republican and Democratic.

Since the Obama administration, these hostilities have been intensifying, reaching the point of attempting to intervene, even with military threats, against the Bolivarian Revolution.

Key figures from the Venezuelan opposition have met with Trump and other U.S. politicians in order to intensify their efforts to oust President Maduro. Even Venezuelan right-wing politicians residing in the U.S. publicly and brazenly call for U.S. intervention.

This activity came to rotten fruit in April, when the counterrevolution increased its attacks, which since then have been daily. They include burning buildings, destroying state properties that offer public services, such as mother-child centers, and unleashing destructive “guarimbas” — violent acts of sabotage. Attacking the police and the Bolivarian National Guard, the terrorists have been assassinating people who are perceived as Chavistas, shooting and even burning them alive — a macabre and cruel expression of their fascist character, similar to the KKK in the U.S. South.

Now, the U.S. and right-wing agenda is to isolate Venezuela by accusing it of being undemocratic for convening the Constituent Assembly. Trump openly threatened to impose serious economic sanctions if the Bolivarian government carried out the Constituent vote. The U.S. president imposed sanctions on 13 senior government officials, military leaders and the nationalized oil company, the PDVSA (Petróleos de Venezuela, S.A.).

The CIA has also announced that it’s working with the governments of Mexico and Colombia in the campaign against Venezuela. Panama and Peru are also part of this hostile conspiracy. The U.S.-led media disinformation campaign obscures the true terrorist and murderous face of the Venezuelan opposition, while distorting the highly democratic reality of the Chavista population, who are pursuing their sovereign and constitutional right to hold a Constituent Assembly.

ExxonMobil and Wall Street are unwilling to overlook the existence of a Constituent Assembly that can defend the full right of the people to their sovereignty, defend the wealth of the nation for the welfare of the great masses — and not the profits of transnational monopolies — and establish a truly socialist base. Because of that, U.S. imperialism manipulates its puppet governments in the region, both inside and outside of Venezuela, as well as all organizations at the international level that respond to Yankee interests, especially the infamous Organization of American States through its right-wing secretary, General Luis Almagro.

Measures such as cutting air travel to Venezuela have already been imposed. Colombia’s Avianca and Delta Airlines of the U.S. left hundreds of passengers stranded at the Caracas airport on July 26 when they ceased operations without prior notice.

But U.S. sanctions do not end in Venezuela. The Foreign Affairs Committee of the U.S. House of Representatives on July 27 passed the “Nica Act,” imposing sanctions on Nicaragua for its solidarity in support of the Venezuelan government.

International support from the people

However, the vote for the Constituent Assembly has aroused a higher commitment of solidarity on the part of revolutionary peoples. This includes the governments of the Caribbean countries — small in geographical terms — which have demonstrated with dignity their great courage, defending Bolivarian sovereignty by opposing imperialist interventionist maneuvers.

Popular movements, especially in Latin America, have been very successful in defending the Bolivarian people’s right to self-determination. Pickets, forums, demonstrations, television and radio programs are continuing. Social networks are filled with messages and expressions of solidarity.

All these movements have emphasized the relevance of the Bolivarian Revolution as an example of the awakening of the peoples. People are confronting the increased threats posed by capitalism in its decadent phase, which is nevertheless still virulent as it tries to recover losses due to the achievements of social movements.

The same forces also see the success of the Constituent Assembly and the Bolivarian Revolution as their own triumph. Should there be, in the worst case, a defeat, they will view it as a setback for their own popular movements. And that’s why other peoples feel in their own skins the pain of the interventionist attacks of global capital.