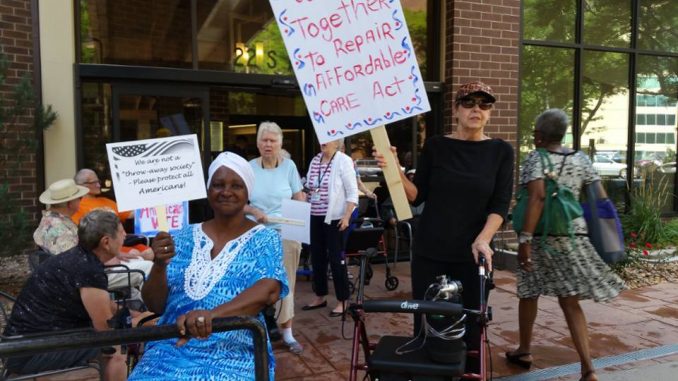 July 25 — Protesters hit the streets across the U.S. from July 17-25 to stop the Republican right’s vicious plans to dismantle the Affordable Care Act and remove at least 22 million people from health insurance coverage. Hundreds were arrested in Washington, D.C., many at the Capitol building, where the millionaire-filled Senate has scheduled a procedural vote to begin debate on repeal of Obamacare on July 25.

Despite the massive popular opposition to their scheme, the Senate voted today to open debate. The reactionaries needed Vice President Mike Pence’s tie-breaking vote to win by 51-50. Judging by the protests up to this time, this narrow vote sets the stage for what can be an epic struggle.

Among the earlier dramatic actions in Washington was the July 24 Emergency Die-in vs. Trumpcare. Millions rely on the ACA to access medical care primarily through Medicaid expansion and federal subsidies to purchase insurance. The National Council for Independent Living (NCIL) scheduled a March and Rally for Disability Rights on Capitol Hill on July 25, which its nearly 900 conference attendees planned to join.

Activists with Americans Disabled for Attendant Programs Today, who were in the second day of a campout outside the Russell Senate Office Building, joined the die-in and spoke at it. Of particular concern to ADAPT and other people with disabilities, including parents of children with disabilities, is the threat that the inhumane bill poses to Medicaid recipients. They call this a life-and-death struggle.

Massive cutbacks in the program would eliminate caregivers and essential, life-saving services and equipment. One banner said it all: “Medicaid = life and liberty for disabled people.”

ns of all kinds have taken place throughout his summer   across the country, as well as in Washington, and have stopped two attempts to “repeal and replace.” Chants of “Kill the bill! Don’t kill us!” and “No cuts to Medicaid!” have echoed throughout the U.S. capital for several weeks, reaching a peak ahead of the Senate vote.

People chanted, “Stand up! Fight back!” at the People’s Filibuster to Stop Trumpcare on July 17, held in Upper Senate Park near the Capitol building. Groups such as Planned Parenthood, the Service Employees Union, Families USA, People’s Action, UltraViolet, an action-oriented women’s organization, and the American Federation of State, County and Municipal Employees, among others, joined the protest.

On the same day, cops arrested 33 people protesting the terrible anti-health care bill at six other actions in Washington. At the Hart Senate Office Building, chants rang out of “We’re ready to fight! Health care is a human right!”

Some 155 demonstrators were arrested at Senate office buildings on July 19, as hundreds of people held sit-in protests at 45 locations targeting Republican senators. National Nurses United, Housing Works, Rise and Resist and members of many other organizations joined actions that day.

Calls for single-payer “Medicare for all!” have resounded across Washington. Rev. Charles King of Housing Works, an organizer of the July 19 civil disobedience protests, said: “We are going to be here every day, as often as we need.  We will go to jail as often as we need to go to jail to preserve Medicaid, Medicare, and the Affordable Care Act and to fight for single-payer health insurance for all.” (Huffington Post, July 19)

ADAPT members made headlines all summer as they occupied Sen. Mitch McConnell’s office in Washington and senators’ offices in many states. They participated in days-long sit-ins, lie-ins and die-ins. Some senators then called in police to arrest ADAPT members, notably several women, including wheelchair users.

Mary P. Kaessinger, Workers World correspondent, who traveled to Washington for the NCIL conference and attended the July 24 die-in, told WW she was impressed by “the courage and determination of ADAPT’s women activists.”

The role of women in opposing health care cuts has been outstanding. This is not surprising, given that the current Senate  bill — and its reactionary predecessors — would defund Planned Parenthood for a year and reduce or completely eliminate essential women’s health services and programs.

All reactionary proposals to repeal and replace the ACA would deprive millions of people of medical care, increase suffering and cause needless deaths. Besides people with disabilities, poor people and the elderly would be injured, with disproportionate suffering in African American, Latinx and other oppressed communities.

Senate Majority Leader McConnell and his right-wing cronies are pressuring wavering senators to overturn the ACA, slash Medicaid funding and push through some inhumane bill despite its unpopularity with their voters. From outside Congress, the billionaire energy magnates, the Koch brothers, threaten to stop funding Republicans unless they end the ACA and slash Medicaid. And the president leads the charge to sabotage health care for millions of people.

This travesty is happening in the wealthiest country in the world where tax cuts for the super-rich and fueling the Pentagon war machine are the priorities — and people’s needs come last.

That’s why these protests are so important. Only a vigilant, persistent people’s movement can push back the aggressive right wing and fight for health care for all.