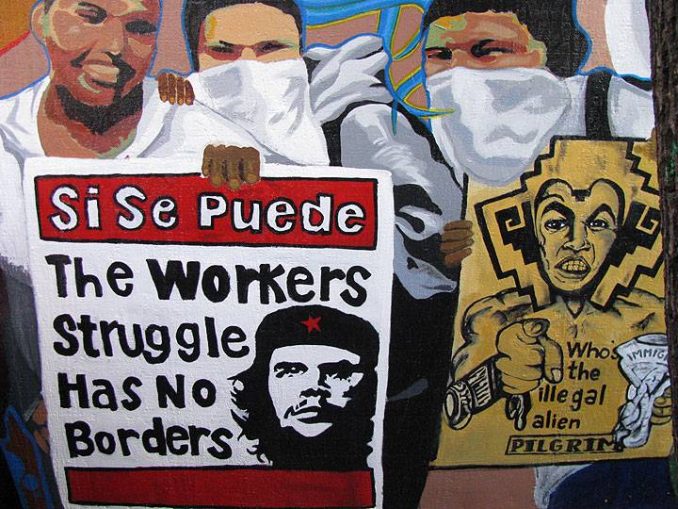 Most of us are familiar with the concept of “war criminals.” Maybe the phrase calls to mind the Nazis sentenced at Nuremberg after World War II.

The U.S. certainly has its share of war criminals. In 2010, the BRussells Tribunal, under the umbrella of the International Initiative to Prosecute U.S. Genocide in Iraq, charged four U.S. presidents — the two Bushes, Clinton and Obama — with “crimes against humanity and genocide” for their responsibility in 1.5 million Iraqi deaths over 19 years of sanctions, attacks and two full-scale wars.

Make no mistake. These are class-war criminals also — those in power in the capitalist economy and political establishment who create the desperate conditions in which workers and oppressed people die, year in and year out, fighting for their lives.

With the terrible news of migrant human beings dying in San Antonio, we have to ask again: “Who are the real criminals?” Some 200 migrants were found dangerously sickened by intense heat in an oven of a truck. At least 10 were dying. The workers were traveling to the U.S. from economically perilous lives in Mexico, Guatemala and other Central American countries.

So far the only criminal charge levied has been against another worker who was driving the truck. There will be no charge against powerful Texas Lieutenant Governor Dan Patrick, who shamefully blamed the tragedy on “sanctuary cities” that don’t cooperate with immigration agencies and that he charges “promote illegal immigration.” Those cities are now banned in Texas.

Politicians like Patrick hobnob with the Texas Business Roundtable — government contractors, petrochemical companies, insurance companies, retailers and restaurateurs — and promote the interests of capitalists who depend on exploiting workers, including the undocumented, to boost their profits.

Amy Fischer of the Refugee and Immigrant Center for Education and Legal Services in San Antonio speaks the truth. She indicted those setting the criminal and death-dealing immigration policies, saying “They, in fact, have blood on their hands.” (LA Times, July 23)

Meanwhile, resistance to the racist class war targeting migrant workers and refuge seekers is building within the U.S.

A Puerto Rican congregation in New Haven, Conn., has now taken into sanctuary Nury Chavarria, a Guatemalan housekeeper who has worked 24 years in the U.S. In Syracuse, N.Y., where the Border Patrol harasses, detains and drags people off buses and trains, the Workers’ Center of Central New York and the CNY Solidarity Rapid Response Team have activated picket lines and resistance at the Regional Transportation Center.

The battle against racism and for immigrant rights is a key struggle in the class war against the crime of capitalism.

Now is the time to join your local self-defense networks in the fight!