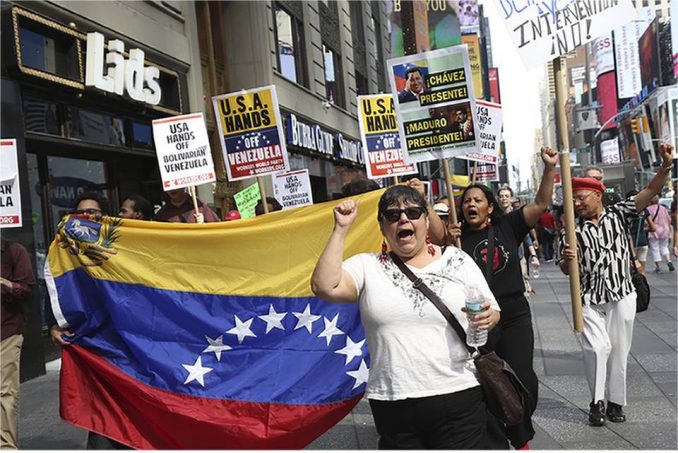 An emergency action was held in New York City on July 22 to stop U.S. intervention in Venezuela and to protest the New York Times’ collaboration with the U.S. State Department. Protesters marched from Times Square to the New York Times building chanting “Maduro, amigo — el pueblo están contigo” (Maduro, friend — the people are with you) and “Donald Trump out of Venezeula!”

The U.S. president has threatened “strong and swift” economic actions against Venezuela if President Nicolás Maduro proceeds with the scheduled July 30 election of members to Venezuela’s Constitutional Assembly.

“This is a call to war from Donald Trump,” Teresa Gutierrez, of Workers World Party, said at a rally in front of the New York Times. “We must do everything we can to stop U.S. intervention in Venezuela.”

William Camacaro, of the Alberto Lovera Bolivarian Circle of New York, said the Times has not reported about the 20 people set on fire and many others killed by the right wing in Venezuela.

Estela Vazquez, executive vice president of 1199SEIU, the health care workers union, noted that while Venezuela empowers its people and provides health care for all, the government here wants to take everything from the workers, including their right to health care and to organize. She denounced the media for its support of the CIA’s involvement in Latin America and particularly in the civil wars in Guatemala, El Salvador, Argentina and Brazil.

Lucy Pagoda, of Honduras-USA Resistance, called on the New York Times to come to Honduras to observe the elections there. She said the U.S. supported the 2009 coup in Honduras, which is now the most violent country in the world. “That’s what the New York Times should focus on,” she said.