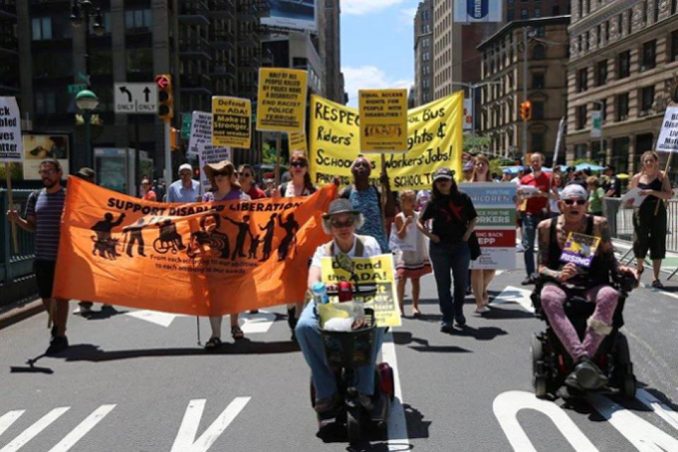 More than 7,500 people with disabilities, along with their families, caregivers, friends and allies, marched, rolled, rode and scooted in a glorious New York City Disability Pride Parade on July 9.

They were celebrating the anniversary of the passage of the Americans with Disabilities Act on July 26, 1990. They were also proudly and firmly opposing threatened government denial of support for access and health care. The looming budget cuts proposed in the U.S. Congress would decimate Medicaid — often a lifeline for elderly and disabled people. Loss of funding for needed services would mean a death sentence for untold numbers.

More than 140 organizations participated in this Pride, including disability rights and service/provider organizations. Grand marshals of the parade included 12-year-old Mary LeDonne, the disabled child of parade founder Mike LeDonne and Micah Fowler, a U.S. actor with cerebral palsy. The disability rights movement has long protested Hollywood’s practice of using able-bodied actors to portray characters with disabilities, much as the film industry persisted for many decades in the racist practice of using Caucasian actors to portray African-American, Asian and Native-American characters.

No cuts to Medicaid, don’t mess with the ADA!

A beautiful new T-shirt was launched at the parade proclaiming: “Disability Pride, Don’t Hide the Pride!” Marchers made that pride abundantly clear. One woman’s hand-lettered sign attached to her wheelchair read, “Cuts to healthcare mean cuts to my INDEPENDENCE.”  Other signs included “Inclusion is within everyone’s ability,” “NEVERTHELESS WE PERSIST,” “CELEBRATING DISABILITIES” (with the “dis” crossed out), “disABLEd & PROUD,” “Disability does NOT DEFINE us,” and “Equal Rights for EVERYONE.”

Renée Imperato, a Vietnam veteran with several disabilities, including post-traumatic stress disorder, told Workers World that friends from a group of transgender and disabled people called “Sick and Sexy” travelled to New York from Philadelphia to join the parade. Sick and Sexy works to smash the bigoted stereotype that alleges people with disabilities can’t be sexy and sensual like everyone else.

Workers World Party, People’s Power Assemblies and Parents to Improve School Transportation composed a joint contingent in their third consecutive participation in Disability Pride since its revival in 2015. WWP, PPA and PIST collaborated in leading chants such as “No cuts to Medicaid! Disabled lives matter!” alternating with “Don’t mess with ADA! Disabled Black lives matter!”

PIST carried signs and a banner defending the rights of students with disabilities to a good education and accessible safe transportation to and from school, and also supporting the workers who transport them.

PPA members handed out a leaflet that demanded access, denounced the proposed cuts and championed the long history of disability rights struggles with the headline: “People with Disabilities Fight Back Then and Now!” This referenced the historic 1990 protest when “the Capitol Crawler” wheelchair users abandoned their chairs and labored up the 83 stone steps of the U.S. Capitol to help get the ADA passed.

Featuring a photograph of wheelchair-user, African-American Jeremy McDole, killed by Delaware police in September 2015, the leaflet documented that disabled people are more than 50 percent of the people killed by police annually.

One week after the parade, on July 16, both of these reporters also attended the third annual Chinatown ADA birthday party. Like the Disability Pride Parade, it featured many entertainers, performers and speakers with disabilities.

One speaker cited the special link between Chinese Americans fighting bigotry and the disability rights movement through the landmark 1974 U.S. Supreme Court civil rights decision of Lau v. Nichols. In this ruling, Chinese-American students in San Francisco won the right to access  education in their own language. This broke new legal ground and helped lay the basis for access and reasonable accommodation rights granted to people with disabilities.

Another speaker related the story of one of the most famous freedom fighters in human history who was also a person with disabilities. Nearly 200 years ago, a 13-year-old girl of African descent enslaved in Maryland threw herself between a fellow slave and a plantation overseer about to whip him for entering a store without permission. The overseer struck her with a two-pound weight, fracturing her skull, nearly killing her and giving her the lifelong disability of epilepsy.

Her name was Harriet Tubman. She later liberated herself from slavery and went on to become a “general” of the Underground Railroad, personally risking recapture or execution to lead hundreds of people out of enslavement to freedom. She dedicated the rest of her life to civil rights and women’s suffrage.

Last year it was announced that this person with a disability will be the new face of the $20 bill, becoming known to millions in this way. She will knock out of daily circulation the racist who enslaved African-American people and the mass murderer of Native Americans: U.S. President Andrew Jackson. He happens to be a hero of anti-disabled bigot, President Donald Trump.

Both Kaessinger, a wheelchair user, and Yudelovich, a person with emotional and hearing disabilities, were contributing organizers of NYC’s 2017 Disability Pride Parade.