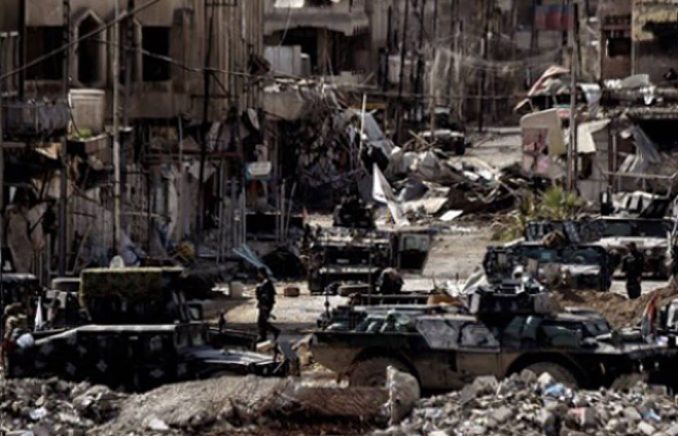 Nine hundred years ago an Arab traveler, as he walked through what is today Iraq, observed: “To the right of the road to Mosul is a depression in the earth, black as if it lay under a cloud. It is there that God causes the sources of pitch, great and small, to spurt forth.” (washingtonpost.com, Oct. 21) That pitch was oil, which should be a source of wealth and prosperity to all of Mosul’s and Iraq’s residents.

But the craving by U.S. imperialism for control over the ocean of oil in Iraq, which led to the overthrow of the Iraqi government in 2003 and long years of the Pentagon’s occupation of the country, has wreaked terrible death and destruction on the Iraqi people. And nowhere is that suffering more clearly evident than in the city of Mosul.

For nearly nine months, 100,000 troops from the Iraqi central government and from the Kurdish region, supported by 5,000 U.S. trainers and special troops and U.S. air power, battled the Islamic State group (IS) that had seized and occupied the city of Mosul since 2014. This “coalition” dropped 29,000 bombs on the city. The second largest city in Iraq, Mosul had a population of 1.8 million in 2003.

During an eight-year occupation of Iraq, U.S. and British officials maintained their rule by creating and exacerbating religious and ethnic conflicts in the country. When the bulk of U.S. forces left in 2011, the imperialist-supported Iraqi government, and reactionary sectarian militias associated with it, carried out punitive measures against the resistance forces close to the former ruling Ba’ath Party, which were often majority Sunni Muslims. Thus, when IS forces invaded the country in 2013 and took control of Mosul in 2014, Mosul residents hostile to the Baghdad regime at first gave them some support.

But over time the fanaticism and brutality of the IS regime caused Mosul residents to drop their support. And as the battle raged for control in the city, the population became hostages of the war between IS and the U.S-supported Iraqi government.

Airwars, a group that monitors casualties caused by the anti-IS coalition, estimates that at the least nearly 6,000 civilians were killed in the western Mosul battle between February and June. Some 1,200 were killed by the U.S. bombing. Uncounted thousands of bodies still lie under the rubble. (pri.org, July 13)

On March 17, a single 500-pound bomb dropped by a U.S. war plane on Mosul’s al-Jadidia neighborhood killed some 200 civilians.

A report by Amnesty International, released a day after Iraqi forces declared victory in Mosul, stated that it had “identified a pattern of attacks by Iraqi forces and the U.S.-led military coalition backing them that violated international humanitarian law and may amount to war crimes.” The report also accused IS of committing war crimes by deliberately using civilians as human shields. (aljazeera.com, July 11)

In the same Aljazeera article, United Nations human rights chief Zeid Ra’ad al Hussein told reporters: “The women, children and men of Mosul have lived through hell on earth, enduring a level of depravity and cruelty that is almost beyond words.” He said that thousands of residents will not be able to go back to the city because of “extensive damage caused during the conflict.”

The destruction of Mosul is of concern to neither the tycoons on Wall Street nor the generals at the Pentagon. They only care about the unimpeded flow of oil from the region and profits into their banks. But the terrible suffering caused by their wars and occupations must be recognized by all those who oppose their rule here and abroad. U.S. out of the Middle East!