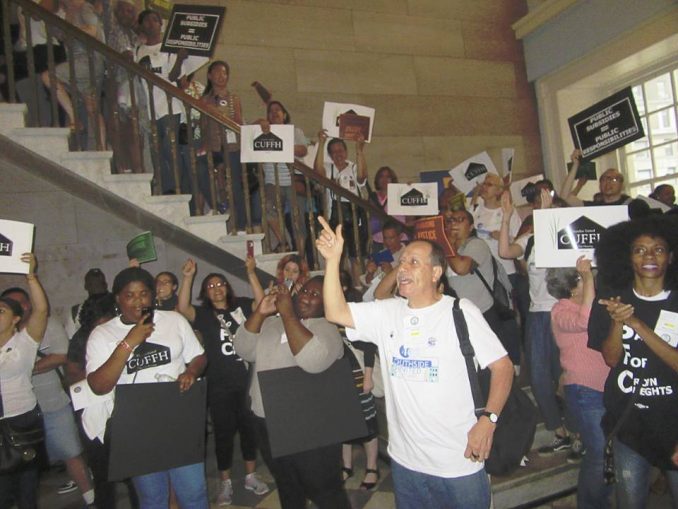 Tenants taking over Brooklyn Borough Hall in fight for affordable housing on July 10.

Hundreds of angry protesters against gentrification lined the steps of Borough Hall, Brooklyn’s city hall, on July 10. Inside, the city Planning Board was about to convene a hearing on the future of the New York City-owned Bedford Union Armory. Developers were licking their chops over the chance to turn the building into high-priced condominiums.

Outside, numerous speakers exposed the racist gentrification of Brooklyn and how developers are displacing working-class people who can’t afford to own a house, much less a condominium, and who now can’t even afford the fast-rising rents. Speakers also denounced the use of nonunion labor for building the new high-rise luxury buildings.

As community organizer Bertha Lewis of New York Community for Change declared at the rally: “ I’m sick and tired of being sick and tired!”

Inside Borough Hall, at the hearing over the armory’s future, the profit-hungry developers filled the front row. But nearly 500 people soon packed two large rooms, including people who had come in five school buses from the Brooklyn Latinx community to join the Black-led delegation of protesters from the Crown Heights and Bedford-Stuyvesant ­neighborhoods.

These predominantly Black and working-class neighborhoods have for years demanded the use of the armory for much-needed affordable housing.

At the hearing, the first speaker from the audience was Jose, wearing a Black T-shirt, “Bad for Crown Heights,” like those worn by many others. Jose was the voice of a community outraged about overpriced rental apartments and displacement. When he was quickly informed that his allotted time was up, Jose refused to stop speaking, and authorities sent security his way.

Jose started chanting, and when he began to march through the room, hundreds of fed-up tenants stood up to follow. The entire crowd soon occupied two floors and the stairs of Borough Hall, including supporters from Construction and General Building Laborers Local 79 and Service Employees Union Local 32BJ.

Enjoying the strength of working-class unity, the protesters shouted bilingual chants: “Hey, hey, ho, ho! Luxury housing’s got to go!” and “‘Kill the deal!” The real estate developers were prevented from taking the floor to argue for their application to sell off the armory to private owners.

The movement won that hearing, just as protesters had also won a big “no” on selling the armory in a packed June 27 Community Board hearing. There are plans for more organizing for affordable housing. The struggle continues.