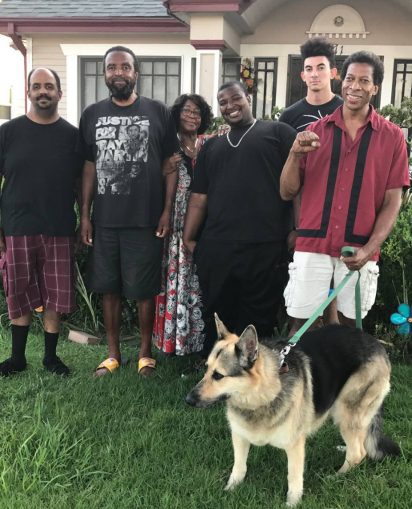 Some members of the L.A. Block Club that defeated the cops, with Edith Simpson in the middle, Joe Crosby, club president, second from left, and Sekou and John Parker on the right with Diamond.

Los Angeles, July 14 — Tonight in my neighborhood I witnessed yet another example of the police as the occupying force in Black and Brown communities.

About 10:30 p.m., I was alerted to the situation when my dog barked — because cops were outside our window. There were nine cop cars in front of my house and my neighbor’s house, with about 13 cops in my neighbor’s yard. 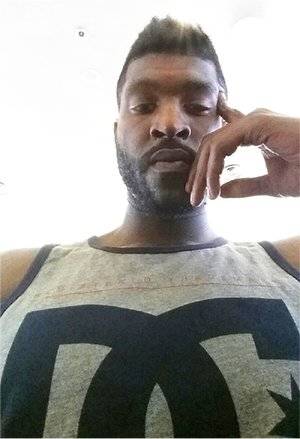 In a later conversation with my neighbor’s grandson, D’Andre Coleman, I found out what had happened. D’Andre , who is about 28 and Black, was going to his car, parked in front of his house, to get his shoes. As he was putting them on by his car, another car rolled up to him and flashed a light in his face, so he knew it was the police. The cop asked if it was his car and he said it was. She asked again and he repeated that it was. When he began walking back to his house, she told him he couldn’t leave. He asked her if he was being detained and she didn’t answer, so he continued to walk.

Without warning and before he could reach his porch steps, the cop got out of the car, ran towards him and pulled on his leg, making him trip and hit his head on the mailbox. He managed to get into his house, but the cop and another cop pulled him out, handcuffed and detained him in the driveway.

Then the sergeant cop said to D’Andre Colman: “It’s all fun and games until I shoot you. Then they have to call for backup.” The lieutenant cop was standing there and heard the sergeant but said nothing.

When I saw the cops outside, I went over to my neighbor and heard the young man’s grandmother, Edith Simpson, distressed and angry, trying to explain to the cops her concern. She said she’s seen many Black young men shot by the cops in the funeral parlor where she works, so she was concerned about her grandson in handcuffs who had just been assaulted.

I told my neighbor I’d get help from the other neighbors, and I went and got my son Sekou and also our Harvard Blvd. Block Club president, Joe Crosby, who then got others to stand in our neighbor’s yard even though the cops were trying to get us to leave.

We repeatedly told the cops that the person they had in handcuffs lived here, in our neighborhood, and it was his car. He even had the keys to the car in his pocket. Their excuse was that he was suspected of stealing the car.

So, we asked, now that they knew who he was, why were they still here and why was he still in handcuffs?

The fact is they wanted to escalate the situation and probably arrest him. If it were not for the community coming out to show “we ain’t havin’ it“ that would have happened.

Finally, after about 30 to 40 minutes and lots of insults hurled their way, the cops let him go. D’Andre emphasized to me: “If it wasn’t for everyone coming out, I’d be dead because there were a lot of cops refusing to de-escalate, which is part of the problem.”

The cops didn’t care about any legal rights or laws they were breaking. Not only did they threaten to kill D’Andre Coleman, they also searched his car with no warrant. D’Andre told me: “While I was on the porch, I saw them searching my car and I told them, when I was in handcuffs, that I did not consent to that. Later, I found things from my glove compartment and trunk on the floor and seat of my car.”

As for cops standing around and watching injustice happen during this and many other incidents of police terror, D’Andre commented to me: “If you simply watch someone get pushed and fall off a cliff without helping, then you might as well have been the one pushing.”

D’Andre noted that the police have gotten worse in our community: “Having it happen here, it’s unnerving and unsettling. I live here and they [cops] live 30 miles away.”

It really is a frightening thing when 13 trigger-happy cops are targeting a young Black or Brown person. But, most importantly, we gathered as many people as possible together to show solidarity and “discourage” the cops’ rabid instincts.

This victory was a good education in solidarity and the power of communities coming together in self-defense against these pigs. Our block club is now in the process of organizing a rapid response network for any future violations by the cops, and the family is getting legal help from Justice Warriors for Black Lives organizer Nana Gyamfi.

John Parker was Workers World Party candidate for the U.S. Senate in California in 2016, and WWP candidate for U.S. president in 2004.