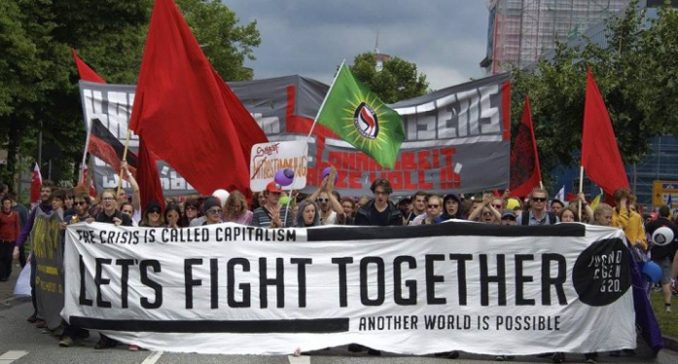 The recent meeting in Hamburg, Germany, of the so-called Group of 20 — that is, the heads of state of the 20 countries with the largest economies — became the focus of two nights and three days of protest in this industrial and port city on the Elbe River. Forces gathered from all of Europe, including many people born in the global South.

By July 8, when the G20 meeting was ending, some 76,000 demonstrators — by the organizers’ hard count — were marching through Hamburg’s streets. These tens of thousands showed up despite two nights when 20,000 German cops, fitted out like an infantry assault battalion, waged a war of aggression against a more militant wing of the protesters — and against anyone who was in the way of the cops’ charges. (See Jungewelt.de special on the G20.)

German Chancellor Angela Merkel’s strategy of police intimidation, and the cops’ actions, seemed to backfire. According to some reports, they aroused solidarity with the victims of police brutality and anger at the cops.

There is a difference between the G20 and the G7. The latter gathers the heads of the imperialist states that colonized the world in the 19th and early 20th centuries and that still exploit labor and land worldwide through their domination of banking, commerce, information, propaganda and especially military power. The G7 includes U.S., Japanese, German, French and British imperialism, along with junior imperialist partners Canada and Italy. These are the imperialist powers responsible for war, climate destruction and worldwide exploitation.

The other 13 countries in the G20, whatever their own inhabitants think of their governments, don’t play the same role in the world, nor do they have a similar monopoly of power. A protest that lumps them all together, then, lacks political clarity.

The July 8 protest’s main demands were for a more stringent restriction of the use of fossil fuels to reduce climate change than provided by the Paris accords, an end to war and war threats, protection of migrant rights and a more just economic policy.

A close reading of hundreds of photographs of the July 8 march through Hamburg revealed an array of demands.

“The crisis is called capitalism; Let’s fight together; Another world is possible,” read one big banner.

In one photo, Black and white demonstrators were shown holding placards reading, “Defend human rights; Stop expulsions” in German and “Stop the war against migrants” in French. Other banners displayed the latter slogan in German and English, adding “Refugees are welcome here.”

A banner with a picture of Che Guevara read, “Solidarity is the tenderness of the people” and “Together for a just world.”

While the U.S. president, noted for his overt Islamophobia, misogyny, U.S. chauvinism and pullout from the Paris climate accords, was singled out in these photos less than might be expected, one placard read, “Donald Dump is a Trashist,” and a large banner read, “Women’s March against Trump and the G20.”

More than one banner read, “Capitalism kills.” That’s a succinct start to a struggle for socialism.