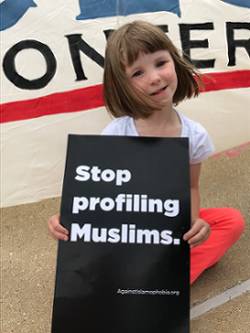 A multinational crowd of supporters joined a #JusticeforNabra vigil at O’Donnell Park in Milwaukee on June 23 to denounce the June 18 murder of Nabra Hassanen in Sterling, Va. The slain 17-year old Muslim teen was brutally attacked and killed by a man with a baseball bat on her way home from a Ramadan-related event. She was wearing a traditional Muslim headscarf at the time.

A diverse rainbow of organizations from the Arab, Muslim, Latinx, African-American and other communities participated. Youth and students played a significant role in organizing this event.

Vigil organizers stated: “We cannot separate this terrible act of violence from the current political moment, a moment where Black lives are under increased attack, where individuals like Nabra’s murderer are emboldened by the anti-Black, anti-Arab and anti-Muslim rhetoric, where communities are pitted against one another.” (For complete statement, visit tinyurl.com/yczvtz2h/.)