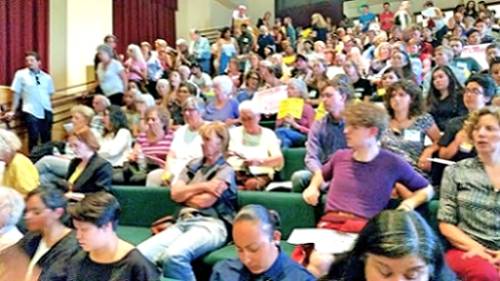 Berkeley, Calif. — Some 400 people packed a special City Council meeting here on June 20 to demand that Berkeley end its “shameful collaboration” with federal police and spy agencies. But the council, while widely hailed as “progressive,” ignored the near-unanimous popular opinion and voted to continue three controversial police programs:

The Longfellow Middle School auditorium was filled to overflowing for this third marathon City Council debate on the subject, this one lasting nearly seven hours. People lined up at the mic to ask the city to make a clean break with these potentially dangerous police programs.

Local educator Steve Martinot summed it up: “These young people came and spoke beautifully and eloquently about what it is like to face the horrors of police impunity and militarization. Speaker after speaker warned against the police state.”

Many spoke of the racist impacts of these federal police programs. Sharif Zakout, with the Arab Resource & Organizing Center, said, “I want to be absolutely clear that Urban Shield was developed in response to 9/11 and the Patriot Act and is an Islamophobic and racist program.” AROC is part of a broad Stop Urban Shield Coalition, whose mobilization succeeded in driving the racist program out of Oakland in 2015. That was the year when “Black Rifles Matter” was the most popular T-shirt sold at the Urban Shield police expo.

Former mayor Gus Newport scolded the City Council for going along with the various schemes for empowering the police. “I cut my teeth in the Civil Rights movement by getting brutalized by police at the age of 11,” he said. “I would hope that you all have the principles, the heart and the concern for the people of Berkeley to make sure these [police programs] do not go any further.”

Berkeley resident James McFadden said the Intelligence Fusion Center and UASI “are part of a continuous effort to consolidate federal control over local police … that escalated after 9/11 with the passage of the Patriot Act and creation of Homeland Security.” He said Berkeley, for example, should not be collecting data that can help Immigration and Customs Enforcement round up immigrants for deportation. “We don’t need a militarized surveillance state, or if unrest grows, a police occupation force as we saw in Ferguson, Missouri,” he added.

When the council withdrew for rest breaks during the long meeting, Stop Urban Shield organizers used these occasions to do “mic checks,” leading chants and updating the audience on some confusing agenda changes decreed by the mayor.

Why is Berkeley cooperating with the Feds?

A postal worker asked: “Why is Berkeley cooperating with the FBI – with its long and grim history of suppressing dissent; busting unions; conducting political witch-hunts; disrupting the civil rights and Black liberation movements and the American Indian Movement, including spying on, assassinating and imprisoning their leaders? Do we really want to be part of a national police network headed by ‘America’s top cop,’ the arch-racist attorney general Jeff Sessions? Now is the time to draw the line.”

The new mayor, Jesse Arreguin, a Democrat elected with the support of Bernie Sanders, voted with the majority of the council to continue Berkeley’s participation in UASI and Urban Shield, although he did vote to pull out of the Intelligence Fusion Center.

After the vote, city resident Marc Sapir was inspired to write an angry open letter to a longtime council member with a certified “progressive” reputation who nevertheless could not bring himself to oppose the police on these issues. “The reason why the Democratic Party cannot pull out of its tailspin is because its duplicity, like yours, is just as real and just as transparent as that of the Republicans,” said the open letter. Sapir chastised the council for failing to “subordinate policing power to popular will.”

‘Show some courage!’ and ‘Be a fearless city!’

Not everyone on the City Council caved in to the police, however. Newly elected council member Cheryl Davila, an African-American woman, was steadfast in opposing all three of the pro-police measures, with support from council member Kate Harrison. This was not appreciated by the mayor, who rudely cut Davila off three times during the meeting. But the soft-spoken Davila persisted, calling on her colleagues to “show some courage,” and stressing the need to “be a fearless city” by ending participation in the federal police programs. “We are a sanctuary city,” she said. “We have to protect every one of our people.”

When the votes were announced, many in the audience rushed the stage and raised a banner opposing police militarization. Most council members promptly scurried away. Police officers responded violently, arresting two young protesters, manhandling others and using their batons to bloody several heads, apparently including that of a 73-year-old man. Cheryl Davila, who had remained in the auditorium, was overheard commenting to the police, “You don’t have to break their arms!”