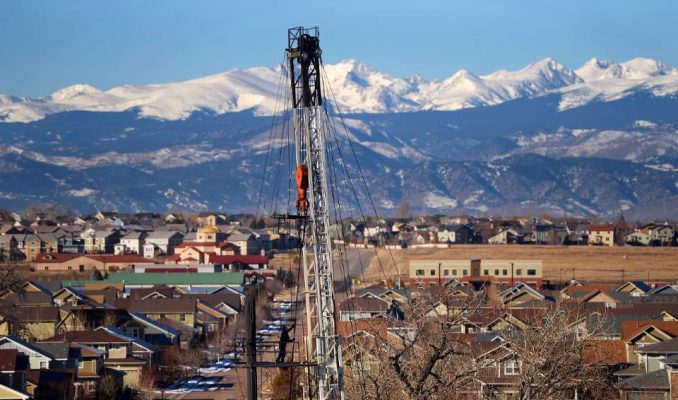 To a person growing up in the New York/New Jersey area, the dark smog that used to hang over the city was a fact of life. Before one sees any blue sky, there was always a blanket of smog created by chemical and organic compounds — byproducts of widespread industrial activity

Those who are members of Native nations or people who grew up in Colorado are now appalled at how areas of beauty have been torn up and transformed into huge industrial sites — this in a mad rush to profit off the oil and gas “gold rush.” The extraction of coal oil and gas in Colorado has greatly increased levels of dangerous chemicals and ground-level ozone.  These are byproducts of the “rush.”

This is especially dangerous to the elderly and to children, as it causes and intensifies respiratory illnesses. Even when the air looks relatively clear, gases like methane and benzene affect the health of Colorado residents.

Nurse Suzanne Cabral was interviewed by the Colorado Independent, an online news source, about the health impact of fracking operations on people who live close to them. Custers of health problems occur at those sites. Those who live nearby had low birthweight infants and newborns with neural tube defects. They suffered nosebleeds, headaches and sleep disturbances. Cabral is now an advocate for the members of her Thornton community. (August 2016)

Children living near well sites have an increased incidence of asthma from being exposed to benzene, a known carcinogen, emitted from the wells. Fracking wastewater is often placed in lined containment ponds or injected into wells up to 10,000 feet deep. This has polluted drinking water. It has also caused earthquakes.

Farmers are concerned about potential harm to their animals, which are breathing these industrial gases and dust, drinking the water and eating the grass which is affected by the pollutants.

Like thousands of old, abandoned 19th and 20th century mines, which are currently deteriorating, leaking and spewing massive toxins into our rivers and waterways, the costly cleanup is being paid for by this generation in the 21st century.

The unknown miles of pipelines, leaking wells and crumbling well casings threaten Colorado water, air and land — with no oversight.  When energy company executives leave Colorado, their pockets are stuffed with money.  But future repair costs and unknown planetary damage will inevitably fall on Colorado workers and their families, as in the past. Corporations are rarely held financially responsible for the damage they do.

Profits from these industries should be set aside to repair the damage done and to transition to safer, nontoxic ways to provide energy.

Capitalism pits workers against the environment

In the interest of making a lot of money with minimum investments, capitalists put workers in a bind. Workers are aware of the dangers of fracking to people, animals and the environment — yet they need  high-paying jobs.  Under capitalism, workers know they are disposable, so they fight to keep their jobs despite knowing their work harms them, their children and the planet.

Abolishing fracking for oil and gas would have long-term health and planetary benefits. Workers who lose their dirty, dangerous jobs could be retrained in safer, cleaner energy employment.

The myth was perpetuated that gas which burns cleaner releasing less carbon dioxide, methane and other pollutants than coal and oil, making it a “bridge fuel” until renewable, less polluting and cheaper options were available. This myth allowed energy companies to keep producing unlimited gas and oil from fossil fuels through fracking.

However, over the last 20-plus years, scientists have observed extreme weather events and climate warming. Rigorous scientific climate studies completed in 1990 by world-recognized climate scientists through the United Nations left no doubt about global warming’s causes and effects. (Ross Gelbspan, “The Heat Is On”)

Scientists now know that fracking for gas and oil releases large amounts of methane gas, which traps much more heat on our planet than carbon dioxide. That means the planet is warming much more rapidly and intensely because of methane. The heat is causing droughts that affect agriculture and kill crops, leading to hunger and forcing people to flee from drought-stricken or flooded areas. Recent satellite studies show that not only the atmosphere above the drilling sites has accumulated greater than expected amounts of methane — but this has occurred all over the planet.

Some of this methane comes from the production process and the wells.  Some comes from higher temperatures in the Arctic, where melting ice is releasing methane trapped in the ice and permafrost there.

Either way, the release of methane contributes to the earth’s warming.  As more ice melts, more methane is released. Rapid trapping of intense heat creates a vicious cycle. Melting ice is visible and the sea rise is measureable. But the gas is invisible, so it is easy for nonscientists to dismiss it. However, the studies are conclusive.

Exxon Mobil commissioned a study in the 1980s which came to the same conclusions. However, oil companies hid the study’s results and falsely spread the idea that scientists were not in agreement or the conclusions were still debatable.

Scientists have sounded the alarms on global warming. It is causing displacement and extinction of some animals. It is also increasing bacteria, viruses and other disease-causing life forms, which flourish in places where they have never existed before because the climate was much cooler.

It is crucial to recognize and stop this industrial activity and burning of fossil fuels.  Continuing on this trajectory will keep warming the planet, which will cause not only extreme weather events — but starvation, drought and the development of new diseases or their eruption in locations where they have never before existed.

Scientists do not know at what point global warming will have gone too far.  The clock cannot be turned back. But they do agree that the danger to the planet is of such urgency that today’s situation cannot be allowed to continue.