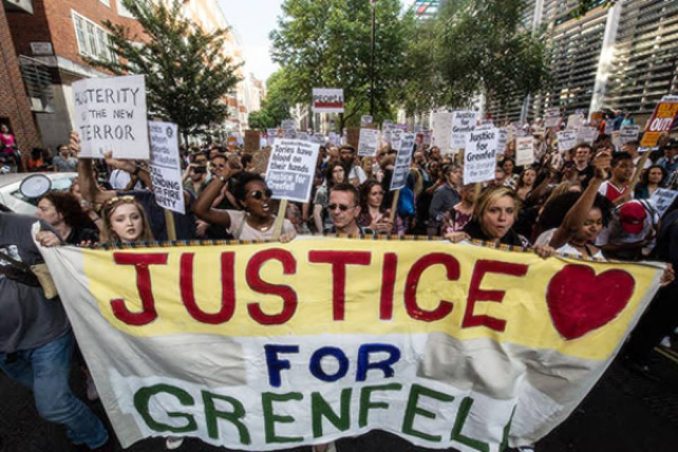 Capitalist greed is the root cause of the raging inferno that killed at least 79 residents of Grenfell Tower in London on June 14 and left hundreds homeless. It began and spread through unsafe building materials that even some capitalist countries have barred from use.

The British government is guilty of neglect and prioritizing cost-cutting above all in maintaining and renovating the high-rise building.  Of lesser — or no — importance to the British rulers was ensuring safe public housing for the multinational working-class and poor families, including many immigrants, who lived there.

Protesters, including survivors, community members and other progressive forces immediately mobilized to demand that the empty luxury housing in that area house all survivors of the catastrophe.  Labour members of Parliament called for uninhabited housing in wealthy Kensington, where Grenfell Tower was located, to be provided for them. Calls resounded for Conservative Prime Minister Theresa May’s resignation and for criminal prosecutions of those responsible for the fire.

People came from all over Britain to express their solidarity with the victims.  Across the country and worldwide, people expressed outrage at the British government’s callous disregard for human life.

May and her Tory colleagues were shaken to the core by this crisis and the domestic and global reaction. The government quickly announced that it had purchased 68 apartments in the posh Kensington Row complex for those displaced by the fire. (Guardian, June 21)

For years, Grenfell Tower residents had complained of the 24-story building’s dangers — no alarm system, no sprinklers, no fire escapes, no evacuation plan and only one exit.  Showing disdain for the tenants, the Kensington and Chelsea Borough Council, the building’s owner, and its management company, ignored them.  Racism and class contempt factored into their neglect.

Residents’ complaints grew louder in 2016, when a contractor, the Rydon Group, refurbished Grenfell Towers, cutting costs at every corner to maximize profits.  Dangerous work imperiled tenants during the renovation.  Unsafe materials were used to cover the building’s façade. Called “cladding,” the material in this case was made of aluminum-composite panels encasing flammable insulation. This type of cladding easily ignites, allowing a fire to climb quickly up the exterior of the building and spread inward to the apartments.

Architects and building experts blame this flammable cladding for the conflagration.

Arconic, a cladding manufacturer, admitted on June 22 that its flammable panels were used in Grenfell Tower. A mere $6,377 more would have purchased non-combustible cladding for the entire building!

An extensive June 25 New York Times article on the disaster points to “failure of government oversight, a refusal to heed warnings” and corporate-friendly Conservative and Labor governments’ drive “to free businesses from the burden of safety regulations.” Fire safety laws were weakened and fire inspections reduced.  Pro-business politicians decided that “cost concerns outweighed the risks of flammable materials to be used in façades.”

Safe housing is a right!

About 800 households were evacuated on June 23 from Chalcots’ five public housing high-risers after fire inspectors determined that the buildings were dangerous. The British Guardian newspaper reported on June 25 that, to date, 60 housing towers across England had been found to have unsafe cladding in post-Grenfell Tower fire inspections.

Diane Abbott, Labour Party MP and shadow home secretary, blamed the Conservative government for the disaster, saying hundreds died.  She stressed: “Grenfell Tower is not just an accident.  Those hundreds of people who died are a direct consequence of Tory attitudes in social [public] housing.  The Tories think people in social housing are second-class citizens … and they are offering them second-class standards of safety.”   (Independent, June 24)

In 1987, Abbott was the first Black woman elected to Parliament, and still faces racism and misogyny.

Fire survivors, community members and progressive activists are seeking the truth about the number of casualties. Many people suspect a cover-up, with information being withheld to assuage growing anger and “unrest,” says Labour MP David Lammy. There is concern about the status of apartment subletters, visitors and undocumented immigrants, whose families fear deportation if they inquire about their relatives.

John McDonnell, Labor Party shadow chancellor, said the victims were “murdered by political decisions” made over recent decades. He cited austerity measures, such as the closing of fire stations and elimination of 10,000 firefighters. (Guardian, June 25)

Only continuing struggle will bring justice for the Grenfell Tower victims.