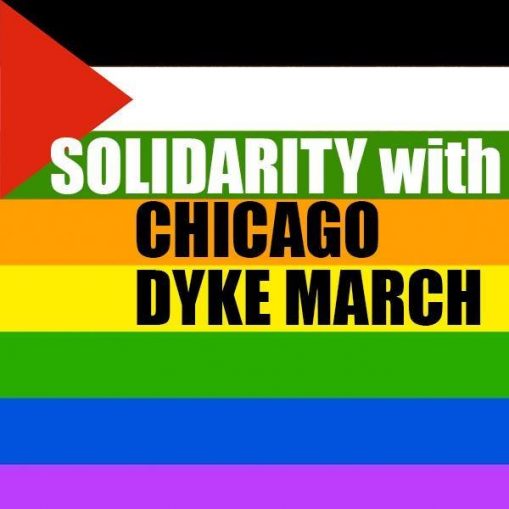 The Chicago Dyke March, an annual social justice-oriented queer community celebration, is under attack by the mainstream media for asking several pro-Zionist individuals to leave the June 24 march.

The organizers of the Chicago Dyke March have issued the following statement:

“Yesterday, June 24, Chicago Dyke March was held in the La Villita neighborhood to express support of undocumented, refugee, and immigrant communities under threat of deportation. Sadly, our celebration of dyke, queer, and trans solidarity was partially overshadowed by our decision to ask three individuals carrying Israeli flags superimposed on rainbow flags to leave the rally. This decision was made after they repeatedly expressed support for Zionism during conversations with Chicago Dyke March Collective members. We have since learned that at least one of these individuals is a regional director for A Wider Bridge, an organization with connections to the Israeli state and right-wing pro-Israel interest groups. A Wider Bridge has been protested for provocative actions at other LGBTQ events and has been condemned by numerous organizations (tarabnyc.org/cancelpinkwashing/) for using Israel’s supposed “LGBTQ tolerance” to pinkwash the violent occupation of Palestine.

“Pinkwashing” is a public-relations strategy used to portray Israel as the only place in the Middle East that is friendly to lesbian, gay, bisexual, trans and queer people. It relies on a broad-brushed slander of the entire Arab and Muslim world, which is presented as “backward.” It is further based on the egregious lie that the Israeli settler state treats LGBTQ Palestinians as equal to LGBTQ Israelis.

Pinkwashing not only serves to legitimize the Israeli state but also reinforces U.S. imperialist propaganda, which claims that the U.S. wages war in an effort to “liberate” LGBTQ peoples and women in the Middle East and throughout the world — even as LGBTQ peoples face police brutality, added economic hardship and denial of social services here in the U.S.

Another essential component of pro-Israel propaganda is the conflation of Judaism and Jewish identity with the settler state of Israel, a lie which anti-Zionist Jewish organizations, like Jewish Voice for Peace and the International Jewish Anti-Zionist Network, have rejected. This conflation allows Zionists to smear anyone who criticizes Israel as “anti-Semitic,” providing a cover for Israeli genocide of the Palestinian people, and erasing the voices and work of Jews worldwide who reject Zionism.

Both these propaganda tactics are in full force in the media’s attack on the Chicago Dyke March’s principled opposition to Zionism and pinkwashing. Articles from Newsweek, Haaretz, Pink News, the Jewish Telegraphic Agency, Unicorn Booty, and Chicago’s Windy City Times refer to the flags as “Jewish pride flags,” with pro-Zionist media outlets like Haaretz, JTA, the Jerusalem Post and others referring to the decision as “anti-Semitic.” The woman who was carrying the Rainbow/Star-of-David flag, Laurel Grauer, identified herself as a Zionist to Chicago Dyke March organizers and also in an interview with JTA, and is the Midwest manager of A Wider Bridge. In a comment on Chicago Dyke March’s Facebook page, Stav Meishar argued that “the flags that ‘triggered’ people were NOT a flag of the modern state of Israel, they are PRIDE flags adorned with the star of David.”

Taken separately, neither the Rainbow flag nor the Star of David are inherently connected to Israel. But to argue that their combination is not associated with the Israeli pinkwashing campaign ignores the origin and connotations of the flag, as well as its current extensive use by pro-Zionist LGBTQ organizations and other entities engaged in pinkwashing the apartheid Israeli settler state.

The first verified instance of any of these variations that Workers World was able to locate online was at a Pride event in Arizona in 2006. (tinyurl.com/y8gfsnt8) The flag was used by AVIV of Arizona, a LGBTQ Jewish organization affiliated with the openly pro-Israel World Conference of GLBT Jews — Keshet Ga’avah. The organization’s website explains that “the Hebrew name [Keshet Ga’avah] means rainbow of pride and reflects the importance of Israel to our organization,” and highlights that “A Wider Bridge teamed up with the World Congress in 2015 to bring Tel Aviv the first global LGBTQ leadership conference in the Middle East.” In the “mission” section of the site, every image features one variation or another of the Israeli Pride flag. Similar flags are featured prominently on the social media accounts of A Wider Bridge.

The origin of the Rainbow/Star-of-David flag is, as far as WW was able to determine, a Zionist organization, and it is used extensively by Zionist pinkwashing organizations and individuals. Conversely, WW was unable to find any instance of the flag being used or promoted by any explicitly anti-Zionist Jewish organizations.

Only by ignoring the historical and political context of the flag and reducing it to its elements can the media and the Zionists claim that it is a merely Jewish rather than Zionist flag. To ask for the flag’s removal was to oppose Zionism, not Judaism.

Solidarity with the organizers of the Chicago Dyke March! Reject Zionist “pinkwashing” and support Palestinian liberation!