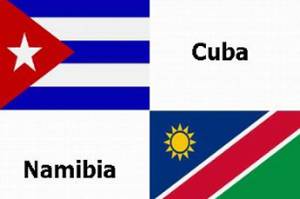 Africans caught in the Atlantic Slave Trade were taken to Cuba, where their presence made an indelible mark on the character of the political, economic and cultural fabric of the country.

Since the 1960s, in the early aftermath of the 1959 seizure of power by revolutionary forces led by Fidel Castro, Che Guevara and others, African independence and transformative struggles have constituted a major factor in Cuban foreign policy. President Castro noted in 1976 that socialist Cuba was populated by Latin-African people opposed to colonialism, racism and imperialism.

This historical tradition was reinforced at a recent conference held in Windhoek, Republic of Namibia, which brought together African leaders and Cuban government officials to renew ties among the geopolitical regions and to chart a way forward in the current period. The Fifth Continental African Conference of Solidarity with Cuba was convened June 6-8 and brought together over 200 delegates from 26 African states under the theme of “Intensifying Solidarity and Continuing the Legacy of Fidel and Che.”

The first of these conferences was held in South Africa in 1995, just one year after the racist-apartheid system’s demise brought President Nelson Mandela and the African National Congress to power. Subsequent gatherings took place in Ghana during 1997, Angola in 2010 and Ethiopia, the headquarters of the African Union, in 2012.

The year 2017 marks the 50th anniversary of the martyrdom of Che Guevara in Bolivia. He was in the South American country assisting revolutionary forces fighting against the neocolonial regime supported by the United States. The Cuban Revolution from its inception posed a challenge to U.S. imperialist dominance over the Caribbean, South America and other colonial and neocolonial territories around the world.

In November 2016, 90-year-old former President Fidel Castro died in Havana. His funeral was attended by many African leaders, including Namibian President Hage Geingob, who paid tribute to the revolutionary leader in an address to the mourners.

In a statement to this year’s Windhoek conference, Namibian Deputy Prime Minister Netumbo Nandi-Ndaitwah emphasized: “The holding of this conference is all the more timely because it is taking place when retrogressive forces are bent on reversing the gains made recently to normalize relations between Cuba and the United States.” Under the previous U.S. administration of President Barack Obama, the reestablishment of diplomatic relations with Cuba after a breach of over 50 years had raised expectations of a possible lifting of the economic blockade imposed by Washington in October 1960.

Without the abolition of the blockade, relations cannot be fully normalized, despite the exchange of diplomats and the reopening of embassies. The U.S. Congress would have to approve the liquidation of the blockade, and there are political elements in it who categorically oppose full economic and trade relations with Havana.

Nonetheless, the Fifth Continental African Conference supported the address by Namibian President Hage Geingob, who said, “We applaud the positive development in this respect and we commend the U.S. government and Cuba for their efforts towards normalizing of ties. However, there is still much ground left to cover to ensure the complete lifting of the blockade against Cuba.”

Geingob emphasized the urgency of the conference to develop a unified African strategy in regard to supporting Cuba. In addition, the delegates passed resolutions demanding the return to the Cuban people of Guantanamo Bay, which remains under U.S. control more than a century after the so-called Spanish-American War.

A co-founder of the ruling SWAPO (Southwest Africa People’s Organization) Party, Andimba Toivo ya Toivo, who died just days after the conference, noted: “Historically, Cuba assisted African countries in the fight against foreign domination. Through this patriotic support, Cuban people have shown us the meaning of solidarity, hence [we should show] our support for Cuba.”

In attendance as well from Cuba were Fernando González, president of the Cuban Institute of Friendship with the Peoples, and Giraldo Mazola, Cuban Ambassador to Namibia.

African leaders viewed the current situation involving the status of U.S.-Cuban relations as critical in light of the political character of the administration in Washington. President Donald Trump used his prerogative of reversing the reforms instituted by his predecessor on June 16.

The conference stressed as a mandate for future actions to “continue developing and strengthening the Cuba solidarity movement in each one of our countries, struggling for unity and truth. We demand that Cuba’s right to self-determination and sovereignty, as well as its right to decide the political system of its choice, be respected.” (Granma International, June 7)

Moreover, the struggle to maintain and enhance the independence and sovereignty of Cuba is linked with other countries in the region. In recognizing this reality, the conference expanded its scope to encompass other states which have also been under pressure from successive U.S. administrations.

The final declaration pledged support to “the causes of all sister countries struggling for a better world. In particular, we pledge our support to Puerto Rico in its struggle for self-determination, the Bolivarian Republic of Venezuela, and the people of Brazil, Bolivia and Argentina, and all peoples of the continent defending their sovereignty.”

In 1961, in the aftermath of the assassination of Congolese Prime Minister Patrice Lumumba, Cuban Minister of Economic Planning Che Guevara spoke out strongly in condemnation of the murderous act, carried out by the U.S., Belgium and other imperialist states utilizing local surrogates. Che toured Africa in 1965 in an effort to build solidarity and make preparations for Cuban internationalists to intervene in Congo in support of the revolutionary forces fighting for Lumumba’s ideals.

Although this mission was not successful, the experience taught profound lessons that laid the foundation for the deployment of Cuban military units in Angola in defense of the Popular Movement for the Liberation of Angola, beginning in October 1975. Angolan President Agostino Neto requested Cuba’s support from President Fidel Castro in the face of an invasion by the South African military, the U.S. CIA and the U.S.-backed surrogate rebel groups UNITA and FNLA, which were designed to derail the genuine independence of the oil-rich former Portuguese colony.

Cuban internationalists spent another 13 years in Angola, where they assisted in defeating the South African forces in a series of battles around Cuito Cuanavale in 1988. After the South African military’s humiliating losses, negotiations began that resulted in the liberation of Namibia, the release of South African political prisoners in 1990 and by 1994 the transition to nonracial, democratic rule in what had been the citadel of apartheid settler-colonialism.

In recent years, Cuba has educated thousands of African students in universities in the Caribbean socialist state. These students are provided with free tuition and lodging.

During the Ebola pandemic of 2014, Cuba deployed hundreds of physicians and other health care workers to Liberia and Sierra Leone, two of the hardest hit West African states. This was instrumental in turning the tide of efforts to halt and eradicate the crisis. The U.S. was forced to recognize the role of Cuba in the battle against Ebola, which paved the way for the reopening of diplomatic relations.

On June 7, outside the conference deliberations in Windhoek, the delegates visited historic sites, including Heroes Acre and the Museum of Independence. The next African Conference in Solidarity with Cuba will convene in the Federal Republic of Nigeria.