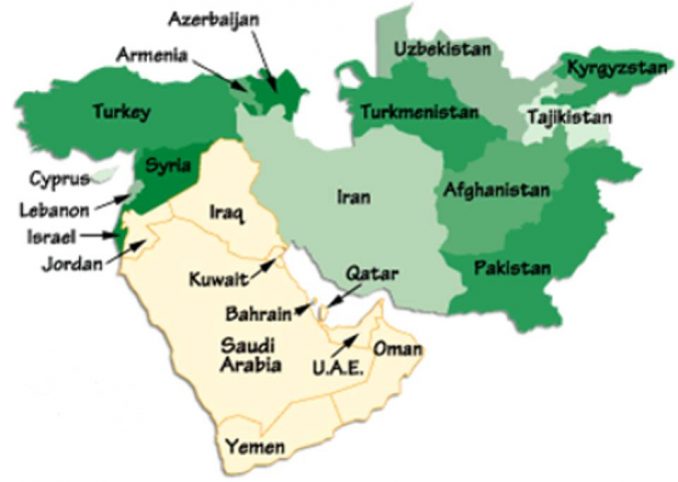 Two weeks after the grand pomp of President Trump’s visit, Saudi Arabia announced the complete blockade of small neighboring state Qatar on June 5. The blockade is an act of war.

Emboldened by Trump’s visit, Saudi Arabia quickly gathered eight other countries to participate in the blockade. The action includes cutting all food shipment and all land, sea and air travel; severing all diplomatic relations; freezing Qatari bank accounts; and expelling all Qatari citizens, within 48 hours, from nine countries in the region.

These are devastating acts, as the Doha International Airport in Qatar is a transit point for 37 million people a year. Qatar imports almost all its food and basic supplies, with 600 to 800 trucks a day rolling into Qatar from Saudi Arabia.

Hardly any political commentator from left to right, or any media from major corporate to alternative, believes Saudi Arabia’s official reason for the blockade of Qatar.

The pretext is that Saudi Arabia is carrying out President Trump’s demand to end the funding of terrorists in the region. Trump has projected the notion of a grand Arab-NATO military alliance supposedly to fight the Islamic State group and Iran. Trump immediately took credit, in a tweet, for the Saudi action against Qatar.

Of course, U.S. imperialism’s wars in the region are the greatest act of terror there. Millions of people have been dislocated as refugees. Whole countries lie in ruin due to U.S. bombs. Sectarian militias and mercenary armies, along with tens of thousands of U.S. troops, have wreaked havoc.

Saudi Arabia assisted these U.S. wars by funding, arming and training fanatical religious groups since the 1980s war in Afghanistan.

Qatar is also guilty of funding groups and sending troops to aid in the destruction of Libya and continually funding forces in the war against Syria. At the time of the Saudi decision, Qatar was aiding Saudi Arabia’s war against a popular people’s movement in Yemen, the poorest country in the Gulf region.

Both the Kingdom of Saudi Arabia and the State of Qatar are repressive absolute monarchies. Almost all the vast oil and gas wealth in each country is owned by one family or extended clan,  the House of Saud and the Al Thani family in Qatar. Unions and political parties are banned in both countries.

Almost 90 percent of the 2.5 million population in Qatar and over one-third of the Saudi population of 31 million are migrant workers barred from citizenship. They have no rights to education, health care and all social services.

These conditions are true for each of the six oil-rich Sunni Arab monarchies of the Persian Gulf bound together in the Gulf Coordinating Council.

Is the Saudi-Qatar conflict just a falling out among thieves and reactionary forces? Or is there a wider significance?

Ordered to cut ties with Iran

Besides announcing the blockade of Qatar on June 5, Saudi Arabia issued a list of 10 demands that Qatar must immediately meet. These included cutting off all links with Iran; expelling resident members of the Palestinian militant group Hamas and the Muslim Brotherhood; closing the Al-Jazeera news channel; and ending “interference” in the affairs of foreign countries.

These add up to an attempt to put a brake on Iran’s growing political and economic influence in the region. This is what is motivating both the U.S. and Saudi Arabia to attack Qatar.

Since the massive upheaval of the 1979 Iranian revolution broke with financial domination of U.S. banks and oil corporations, Iran’s very existence, despite decades of sanctions, remains a threat to the corrupt Gulf monarchies where all power and privilege is inherited.

While threats against Iran seem to be the primary motivation behind the joint U.S.-Saudi attack on Qatar, there are other immediate financial motivations for this move.

Qatar has become, in 25 years, the world’s largest exporter of liquefied natural gas. The country now has 30 LNG terminals, with six more under construction.

Qatar has diplomatic relations with Iran, not because the Qatari monarchy is forward thinking, but because Qatar shares with Iran the gas field that has made the Al Thani family fabulously wealthy. The South Pars/North Dome Field is offshore from Qatar and Iran in the Persian Gulf, so the two countries share exploration rights.

It is impossible for Qatar to cut off all relations with Iran and survive. The Saudis understand this all too well.

Qatar has attempted with its new wealth to chart a more independent foreign policy. It is often a go-between and negotiator in the region. It is a host to Arab forces connected to Hamas in Palestine and to the Muslim Brotherhood in Egypt.

Qatar is also the first country in the region to open a clearinghouse that allows gas and oil to be traded in yuan, the Chinese currency. This financial hub immediately undercuts the position of the dollar and puts banks in Doha, the capital of Qatar, ahead of other Gulf financial centers.

Meanwhile, the Saudis are desperately concerned with chronically low oil prices. They are spending billions in a losing war in neighboring Yemen, a war that seeps back into Saudi Arabia.

The second largest exporter of LNG gas is the U.S., so U.S. companies would benefit from a blockade of Qatar.

So the immediate economic beneficiaries of a shutdown in Qatar are U.S. and Saudi Arabian oil and financial interests.

Trump, the big corporations and the absolute monarchs of the oil-rich Gulf States are products of capitalism in its most vicious, competitive, cutthroat form. They are predators, always on the search for hostile takeovers and mergers. Seizures of assets are the order of the day. Glut and overproduction as well as loss of profit are their greatest fears. War is always on the table.

Dislocation across region, in NATO

The Trump-Saudi scheme to force Qatar to capitulate to their demands or face an internal coup may not succeed so easily. It is instead fracturing alliances in a highly unstable and volatile region, where no U.S. war has succeeded as yet and U.S. domination is already waning.

So far the Saudi action has not only split the six-nation Gulf Coordinating Council. Given German and Turkish opposition to the Saudi move, it also seems to have split NATO, the U.S.-dominated military alliance.

From the GCC, Saudi Arabia has pulled in Bahrain and the United Arab Emirates behind its anti-Qatar moves. Other countries dependent on Saudi Arabia dutifully signed on to the blockade, including Mauritius, Mauritania, the Maldives, the Saudi-backed government of Yemen and Libya’s eastern-based government. But Kuwait and Oman have resisted participation.

Of NATO members, Germany’s Foreign Minister Sigmar Gabriel blasted the Trump-Saudi policy as “completely wrong, and it is certainly not Germany’s policy.” He warned it could “lead to war.” (Reuters, June 7) The Turkish Parliament has approved a plan to deploy troops to Qatar and to provide immediate food and water.

Iran immediately sent aircraft and ships with hundreds of tons of food to Qatar. Iran, Iraq, Jordan and Turkey opened their airspace to Qatari flights now blocked from flying over Saudi Arabia and Egypt.

The U.S. is well situated militarily to enforce demands on Qatar, as the country hosts the biggest concentration of U.S. military personnel in the Middle East at the Al Udeid Air Base. With 11,000 U.S. troops stationed there, the base is the center of U.S. command and control of air power over Iraq, Syria, Afghanistan and 17 other countries.

But contradictions in this situation were on full display in two June 9 press briefings in Washington. Secretary of State Rex Tillerson, former CEO of ExxonMobil, knows better than Trump what’s at stake in the long term. He urged de-escalation and negotiation. Ninety minutes later, Trump took the opposite view, again applauding Saudi Arabia.

President Trump’s visit to the Kingdom of Saudi Arabia two weeks before the blockade resulted in a $110 billion sale of weapons to ramp up military threats against Iran, although this monstrous weapons sale is facing fierce congressional opposition.

It is when old alliances fracture — and glut and overproduction prevail — that the danger of war moves to red alert.