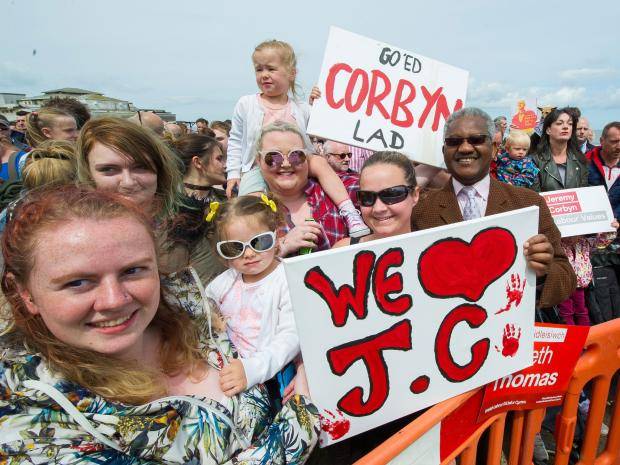 Faced with the double barrels of belt-tightening brought by Britain’s exiting the European Union and the Conservative Party’s attack on social programs, the voters in Britain decided to upset the political landscape. They cost the Conservatives their majority in Parliament, increased Labour’s position and strengthened Momentum, a pro-socialist formation within the Labour Party comprised mainly of young people, as led by Jeremy Corbyn.

Turnout was the highest it had been in 25 years, resulting in 12 seats lost for the Conservatives (Tories) and a stunning 29 additional seats won by Labour. In terms of voter share, it was a gain for Labour not seen since 1945. The Tories still have the most seats of any party in Parliament, but will need to form a coalition government. The opposition to Tory racism, war and austerity has grown stronger, as was reflected on June 8.

In an arrogant and ill-fated move, Prime Minister Theresa May had decided this spring to call snap elections to build towards a majority in Britain’s parliamentary government. Had the Tories succeeded, this would have cleared the path for the mass seizure of public benefits via brutal austerity measures domestically, while the military would be free to pursue its arms deals and wars overseas.

To say that the June 8 elections “backfired” on May would be a grave understatement. As Corbyn himself said to Bloomberg News, “The arguments the Conservative party put forward in this election have lost.” (bloomberg.com, June 9)

Despite this, Theresa May has stated that she has no intention to resign as prime minister, and that she will serve out her five-year term. The Tories are expected to form a coalition government with the hyper-racist, sexist and anti-LGBTQ Democratic Unionist Party, based in the British-occupied counties in the north of Ireland.

On June 9, hundreds of people arrived at Downing Street to protest May’s insistence to stay and the possibility of making an alliance with a party that mobilized to support South African apartheid. They held signs that said: “Defy Tory Rule,” “Stand Up to Racism” and “Corbyn In, Tories Out.”

Indeed, the most critical result of this most recent election is that the electorate, and especially the youth, seems to be becoming more politically active in defense of working-class programs. Labour’s message promoting free education and continued free health care, nationalization of industries, greater control on the job, universal housing and an end to austerity resonated deeply with the population. What resulted was a gain for Labour not seen since the 1990s.

The Momentum organization stated that Corbyn’s Labour Party would mean “decent homes for all in both the public and private sector” and “a society free from all types of discrimination,” as well as nationalizing critical sectors and a class-based redistribution of wealth.

However, social democracy has its limitations built in, as the history of the Labour Party has proved. This party supported all the imperialist claims of Britain to its former colonial empire following World War II, and its Tony Blair wing joined U.S. aggression against Yugoslavia, Iraq and Afghanistan.

Even the leftist Jeremy Corbyn, in the same speech that said British aggression was to blame for the attack in Manchester in May, also blamed police cutbacks and looked to the imperialist state apparatus to solve the problem. He said that under a Labour government, there would be thousands more police added to the streets. This is the same state apparatus — police and military — that keeps the British bankers and capitalists in power.

This approach is the opposite of a real working-class solution. It ignores the fact that Black, Brown, migrant and poor people are the ones who suffer from police brutality.

Historically, reformism based on social democracy was able to secure more rights for the working class and oppressed. This happened in a time of capitalist expansion post World War II. In the last 30-40 years most of those victories have been whittled away. By failing to address the underlying demon in society — capitalism and imperialism — reform at best is simply beating back the inevitable.

A Labour government now, even with a leftist prime minister, would face the entirety of the global imperialist class, which is dead set against the social democratic program that Labour presented to the population. As other social democracies have discovered, the entire weight of the ruling class can and will be brought to bear to ensure that a bourgeois democracy does not — somehow — magically transform into a working-class democracy or reflect the will of the working class over the bourgeoise.

A famous miniseries that aired across Britain in 1988 was called “A Very British Coup.” In it, a character based on 1980’s left-wing politician Tony Benn becomes prime minister after Labour achieves a landslide victory. The government sets out to do exactly what it said it would in terms of social programs, as well as attempting to evict the United States and NATO.

As a result, the U.S. government schemes with the British capitalist and landed elite to overthrow the government via manipulating labor leaders into reactionary work stoppages, currency speculation and shortages, all of which culminate in a military coup.

It was a story that reflected a reality. Britain’s parliamentary system exists as part of a world imperialist system. Britain is a member of NATO. The media mogul who enjoys the largest share of private media — Rupert Murdoch — is a U.S. citizen. Its banking interests are international in scope.

Besides the imperialist EU, its second biggest trading partner is the United States. The working class and oppressed living in the United Kingdom will not find liberation simply by voting Labour.

Karl Marx himself could be elected U.S. president or British prime minister, but it wouldn’t change the fundamental oppressive nature of society, because the state as it stands serves the rich and powerful at the expense of the world’s oppressed majority. Only a revolution that starts in the workplaces and streets, not in the halls of power, will achieve actually existing socialism.

It is only by organizing the working class and oppressed independently of the Labour party that real, lasting socialism can be built.

The June 8 election, however, signaled a positive development within the workers’ political consciousness. It opens a space for the working-class movement to organize, to learn how to operate, to gather itself together and reach out to more workers.

Real power comes from the streets. It is doubtful that Labour would have seen these gains without the militant student protest movement in 2011, after the British government decided to triple the cost of tuition across the university system. As a result, a great majority of Britain’s youth turned against the Tory government and got politically active. The movement for housing rights and against police murders of Black and Brown people has also pushed the mainstream political discourse to the left.

Something like a million people under 25 years old registered to vote, and the percentage of youth actually voting grew from about 43 percent to close to 70 percent. The great majority of their votes went to Labour.

As the limitations of Labour’s leverage within the electoral system become more and more apparent in the coming weeks, the best result will be further mass organization outside the Labour Party electoral structure for struggle in the offices, factories, schools and the streets.