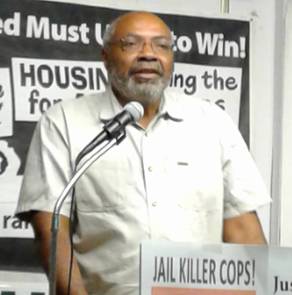 This slightly edited paper by Abayomi Azikiwe, editor of the Pan-African News Wire, was prepared for and presented in part at a panel during the Left Forum during the weekend of June 2-4 at John Jay College of the City University of New York. The session, sponsored by Workers World newspaper, included presentations by Taryn Fivek, of the International Action Center; Andrew Mayton, of the Baltimore Antifascist Community Defense; and John Steffin, of the New York Branch of Workers World Party.

A series of conferences involving African Union member-states and the People’s Republic of China has highlighted the dynamic, evolving political and economic character of relations between the two geopolitical regions.

Known as the Forum on China-Africa Cooperation (FOCAC), the organization was formed in 2000 in Beijing. Over the last 17 years the volume of trade and investment taking place has accelerated.

Both the PRC and AU member-states have forged stronger links since the beginning of the 21st century due to the needs of both areas. China requires energy resources, agricultural commodities and outlets for its products.The African continent must find states and other entities to provide investments for infrastructural, technological, scientific, health care, educational and services development.

Today China is the second-largest economy in the world. Since the revolution of 1949, the country has been transformed from a semi-colonial, underdeveloped state to a power to be reckoned with by the imperialist powers of the United States, European Union and Japan.

Africa has far more land mass than China and fewer people. Nonetheless, the continent is rich in mineral and natural resources, which, if properly harnessed and utilized for development purposes, could place AU member-states as a leading force in economic growth and consequently world politics.

The recently constructed AU headquarters in Addis Ababa, Ethiopia, was built by Chinese architects and workers. This is a state-of-the-art facility that positions Africa for achieving unprecedented heights in the present period.

Chinese government investment and assistance to AU member-states is based upon respect and refrains from interference in the internal affairs of all governments. This represents a sharp departure from the legacy of Western domination through the periods of the Atlantic Slave Trade to colonialism and neocolonialism.

Struggle against slavery and colonialism

Slavery and colonialism sought to divide African people for the sole purpose of exploitation and national oppression. The false notions of benevolent intent aimed at bringing Christianity, European values and trade have long been debunked as a result of the research of progressive African historians and social scientists.

At the beginning of the contact between Western Europe and Africa in the 15th century, there was no significant gap in development. In fact, prior to the 15th century, the center of the world economic system was not in Europe. The key areas of trade and nation building were located in the Indian Ocean basin, extending west and north in Africa, and across the areas now considered the Middle East to the Asia-Pacific regions.

China was also subjected to attempts at colonial domination and enslavement. Both Britain and Japan sought to utilize China for their own benefit. Characteristic of imperialism, wars of conquest were waged against China in the 19th and 20th centuries.

The historic development of slavery and colonialism in Africa had balkanized the continent. Although China, Korea and Vietnam were divided, the emergence of strong communist-led movements was essential in fostering their social trajectories. African liberation movements in some areas of the continent also produced socialist-oriented independence fronts and states. However, the magnitude of the African land mass divided by imperialism posed monumental challenges in constructing socialism. Consequently, AU member-states can learn from the history of China over the last century.

FOCAC meeting in South Africa in 2015

A second full summit of FOCAC was held in Johannesburg, Republic of South Africa, on Dec. 8-9, 2015. At this important gathering, commitments were made to initiate joint projects in 10 sectors of economic activity. PRC President Xi Jinping announced $60 billion (U.S.) in financial projects on the African continent.

The disbursements of these funds include $5 billion of direct, interest-free loans. Another $35 billion is allocated for what are described as preferential loans and export credit on favorable terms. An additional $5 billion in capital is slated to replenish the China-Africa development fund. Some $5 billion more in initial capital will go for special loans to a number of small and medium-sized enterprises each. Finally, $10 billion was allocated to enhance the China-Africa production capacity cooperation fund. (AU.int, Aug. 2, 2016)

To ensure the implementation of these projects, a coordinators’ meeting was held July 28-29, 2016, in Beijing. The meeting was co-chaired by South Africa and the PRC.

The AU Commission was represented by H.E. Fatima Haram Acyl, who is the commissioner of Trade and Industry. Chadian Foreign Minister Moussa Faki Mahamat represented the AU, since the Central African state was the chair of the regional body at the time. Over 300 ministerial and senior-level officials participated in the deliberations in Beijing.

South African Minister of International Cooperation Maite Nkoana Mashabane stated: “In a matter of months since the summit in Johannesburg we are busy with implementation, unlike past partnerships whose implementation would take a long time. By 2018 we shall have completed the first phase of action and ordinary Africans will be feeling the difference made by the partnerships.”

Minister Mahamat drew the link from FOCAC’s Johannesburg summit, the coordinators’ meeting and the ambitious Africa 2063 plan adopted at the Jubilee gathering of the AU in 2013. This event commemorated the 50th anniversary of the founding of the OAU. Although the events of May 24-25, 1963, constituted a compromise in the political context of  postcolonial interstate African relations, the OAU at least provided a rudimentary framework for enhanced cooperation.

The establishment of the OAU Liberation Committee provided a mechanism for channeling aid from African states and other collegial governments into national liberation movement organizations for the procurement of political training and the establishment of armed revolutionary structures, which effectively fought the existing colonial and settler-colonial regimes.

In the 1960s, China under Chairman Mao and Premier Chou En-lai expressed maximum solidarity with the African Revolution. A 1963 gathering of African freedom movement representatives in China served as the backdrop for issuing the PRC’s first comprehensive declarations of support for the African-American struggle against racism, national oppression and repression.

Mao’s statement, which was published in the Peking Review on Aug. 12, 1963, read in part: “The speedy development of the struggle of American Negroes [African Americans] is a manifestation of sharpening class struggle and sharpening national struggle within the United States; it has been causing increasing anxiety among U.S. ruling circles. The Kennedy administration is using dual tactics. On the one hand, it continues to connive and take part in discrimination against Negroes and their persecution and even send troops to suppress them.

“On the other hand, in the attempt to numb the fighting will of the Negro people and deceive the masses of the country, the Kennedy administration is parading as an advocate of ‘the defense of human rights’ and ‘the protection of the civil rights of Negroes,’ calling upon the Negro people to exercise ‘restraint’ and proposing the civil rights legislation to Congress. The fascist atrocities of the U.S. imperialists against the Negro people have exposed the true nature of so-called American democracy and freedom and revealed the inner link between the reactionary policies pursued by the U.S. government at home and its policies of aggression abroad.”

Mao then makes a significant appeal to the international community, writing, “I call on the workers, peasants, revolutionary intellectuals, enlightened persons of all colors in the world, whether white, black, yellow, or brown, to unite to oppose the racial discrimination practiced by U.S. imperialism and support the American Negroes in their struggle. In the final analysis, national struggle is a matter of class struggle.”

No such statement was ever made by imperialism, both inside and outside the U.S. Therefore, the Chinese Revolution has made a profound contribution to the quest for liberation and social justice for the African people on a global scale.