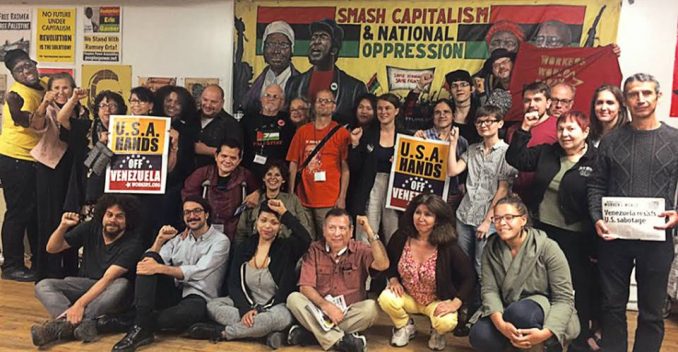 Activists along with Venezuelan delegation attend June 3 film New York City showing, ‘The Revolution Will Not Be Televised’ as part of national days of solidarity with Venezuela.

National actions are being held in response to a call by the International Action Center for Emergency Days of Solidarity with Bolivarian Venezuela, from June 1 through June 10. The IAC’s appeal states in part:

“Make no mistake; what has been happening for the last two months in Venezuela is a counterrevolution by the most reactionary forces of the opposition to President Nicolás Maduro’s government. It is no different from what the U.S. did with [dictator Augusto] Pinochet in Chile in 1973, with the ‘contras’ in Nicaragua in the 1980s and more recently against Libya and now in Syria. It is a ‘regime change’ effort.

“The corporate media — the voice of the Pentagon and White House — have set up an international campaign of blatant lies that try to present the terrorist actions of the fascist hordes as repression from the Revolutionary Government [of Venezuela]. The truth is that these terrorist acts are directed against the state’s buildings and agencies and against the supporters of the revolution. The aim of these protests is to create chaos in order to declare a ‘humanitar­ian crisis’ and demand U.S. intervention.

“State agency buildings have been destroyed, an entire fleet of public buses burned, a health facility for women and children attacked. More than 60 people have died and hundreds wounded during these protests. These are not ‘pro-democracy peaceful’ protests, as the media try to portray. Criminal groups and thugs are involved; children, paid by the opposition with U.S. aid money, are also involved. The fascist, hateful and racist character of the attacks includes setting people on fire, stabbing and beating them while shouting racist insults.

“The Organization of American States has been the principal body working on behalf of the U.S. to launch an international campaign against Venezuela. As a result, Venezuela left the OAS.

“Now there is a real danger of a military intervention. Two days after Colombian President Juan Manuel Santos met with President [Donald] Trump in Washington, Colombian army tanks were mobilized to the border with Venezuela.

“During these days, we aim to: expose the U.S. government and media’s role; show the truth behind these demonstrations; and express solidarity with the Bolivarian people and their government.”

Solidarity from coast to coast

A determined crowd picketed at the Ron Dellums Federal Building in Oakland, Calif., on June 2 to demand “U.S., CIA, hands off Venezuela.” Holding signs in defense of the Bolivarian Revolution and against U.S./OAS threats against Venezuela, the picketers faced jeering chants from a small but vocal group of right-wing Venezuelans.

Workers World Party’s Durham, N.C., branch sponsored a film screening of “The Revolution Will Not Be Televised” in solidarity with the Bolivarian Revolution in Venezuela on June 4 at the Durham Solidarity Center.

In New York City, a viewing of the same film on June 3 was attended by a large multinational, multigenerational and multigender audience. William Camacaro, of the Alberto Lovera Bolivarian Circle of New York, brought a delegation of Venezuelans to the screening, which was sponsored by the IAC and WWP. A protest in solidarity with the Venezuelan Revolution will take place at New York’s Times Square on June 6.

Terri Kay and Sara Flounders ­contributed to this report.