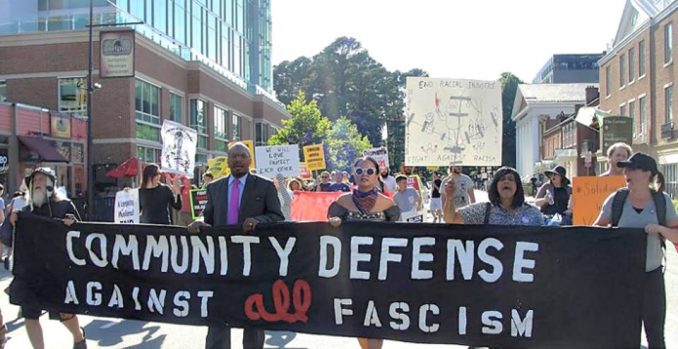 Fighters against white supremacy took to the streets June 3 in Charlottesville, Va., for a “Community Defense Against Fascism” protest.

Starting with a rally at the University of Virginia Rotunda, speakers from Charlottesville, Roanoke, Baltimore and elsewhere denounced the latest actions of white supremacists. Those bigots have been defending the statue of Confederate Gen. Robert E. Lee in one of the city’s main parks. The protest also roundly criticized the actions of police to protect racists and the Jim-Crow-type conditions still prevailing in the city and state, from anti-union policies to segregated housing. A strong point was made that money the U.S. government spends on war could be used for people’s needs.

After the rally, dozens of multinational, all-age and all-gender protesters took the street for their march to “Lee Park,” where the Lee statue still stands despite a City Council vote that it be taken down. A judge recently put a stay on that decision. Along the march route, the protest, which included many children, was ambushed and attacked by Charlottesville and other police who screamed, threatened mass arrests and rammed vehicles into protesters. A few protesters were temporarily detained and given tickets.  No one reportedly hurt.

Despite this police terror, protesters marched on to “Lee Park” with their banners and signs declaring “Jobs Not Racism,” “Smash White Supremacy,” “No Human Being Is Illegal” and other slogans. They joined with another people’s rally taking place there that included speakers, cultural events and discussion of future plans to root white supremacists out of Charlottesville and to continue building a broad-based people’s united front movement.