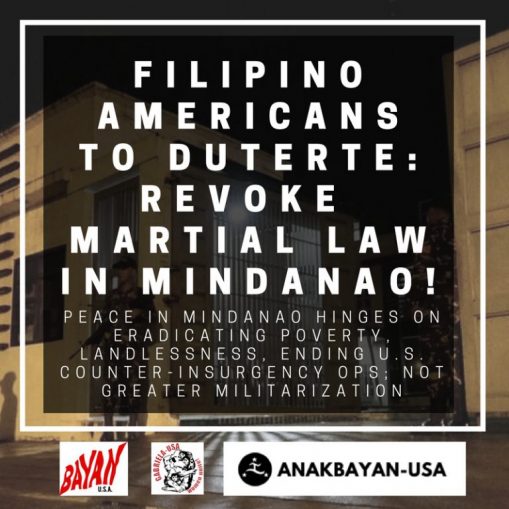 BAYAN-USA, Anakbayan-USA and GABRIELA USA issued a statement on May 23 condemning the imposition of martial law in Mindanao by Philippine President ­Rodrigo Duterte’s administration. Headlined “Filipino Americans to Duterte: Revoke martial law in Mindanao,” it is posted at bayanusa.org. Below are some excerpts.

Bernadette Ellorin, BAYAN-USA chair­person, states: “Martial law will never lead to peace in Mindanao. It will only aggravate the roots of the armed conflict in the region and place thousands of innocent civilians in danger of violent attack.”

Irma Shauf-Bajar, GABRIELA USA chairperson, says, “With more military operations, women and children will be even more vulnerable to rape, harassment and other sexual abuse.”

The organizations call on Duterte “to pursue diplomatic and peaceful means to address not only the attacks by the Maute group in Marawi, but also the roots of the armed conflict in Mindanao. This includes implementing urgent reforms outlined in the “Comprehensive Agreement on Social and Economic Reforms.” Discussion of these reforms is part of the ongoing peace negotiations between the Philippine government and the National Democratic Front of the Philippines, “which include respecting the Moro people’s right to self-determination and respect for ancestral domain.”

“The social unrest and armed conflict in the Bangasamoro region of Mindanao must be placed within the proper socioeconomic and historical context. Lanao del Sur, the province where the Maute group operates, has the highest poverty rate in the Philippines, yet remains one of the most resource-rich in the country, a prime attraction for foreign corporations for lucrative investments and large-scale extractive operations.”

A 2006 WikiLeaks cable revealed the Liguasan Marsh has “the largest deposits of oil and natural gas in the Philippines and in the region, worth hundreds of billions in U.S. dollars.”

Ellorin explained: “The armed conflict in the Bangsamoro territory … is essentially rooted in the Moro people’s legitimate struggle for self-determination, including aspirations for genuine sustainable development that would allow for [their] livelihood off of their own land. It would also mean freedom from over a century of U.S. counterinsurgency operations that continue until this day, designed to keep the natural resources of the region under foreign control.” [Mindanao has the largest concentration of U.S. military personnel in the Philippines.]

Ellorin asserted: “But the U.S.-backed mainstream media and die-hard militarists in the Duterte administration … opportunistically distort the narrative into one of so-called Islamic extremism, so-called terrorism and drumbeat a pretext for greater militarization, especially U.S. military intervention.”

BAYAN-USA, Anakbayan-USA and GABRIELA USA call for “greater vigilance against increasing U.S. intervention in the region, as the Trump administration recently increased the U.S. defense budget by $59 billion, resulting in $639 billion for U.S.-led war and militarization abroad, and especially in Asia.”

Bonifacio stressed, “The Trump administration’s increase in military spending goes hand in hand with a proposed $9.2 billion cut in the national budget for public education, alongside cuts to other social services. We condemn the diversion of funds that should be spent on the people toward war and militarization in the Philippines and around the world.”