The following obituary about the life of Miguel Urbano Rodrigues was published on May 27 by the editors of the Portuguese-language website ODiario. It was translated by WW managing editor John Catalinotto, who participated in the three conferences at Serpa described below and is a contributor to the ODiario.info site. 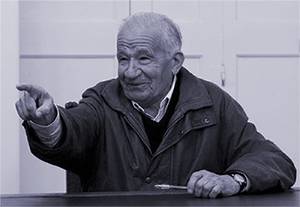 ODiario.info informs its readers and friends of the death of its founder and publisher Miguel Urbano Rodrigues.

Born in Moura, in the Alentejo region of Portugal in 1925, the son of a journalist father and writer, in the midst of a family of well-to-do republican [anti-monarchy] farmers, he lived through the establishment of the Estado Novo [fascist] dictatorship while absorbing the influence and inspiration of the people of his native soil who refused to submit.

Miguel Urbano Rodrigues attended the Faculty of Letters of Lisbon. He came to be editor of Diário de Notícias (beginning in 1949) and editor-in-chief of Diário Ilustrado. A young man endowed with unusual intellectual curiosity and talent, and committed to the causes of the people, he found himself constrained and threatened by the fascist regime that gagged and imprisoned his country.

Exiled in Brazil, he was an editorialist of the daily newspaper O Estado de S. Paulo (1957 to 1974) and international editor of Visão magazine (1970 to 1974). During this period, he accompanied or intervened in key events weakening the fascist regime on the international arena, namely the assault on the regime’s ship “Santa Maria” and the progression of the MPLA [Popular Movement for the Liberation of Angola] and PAIGC [liberation organization in Guinea-Bissau and Cape Verde] struggle against Portuguese colonialism. In 1963 he joined the Portuguese Communist Party.

He returned to Portugal shortly after April 25, 1974, at the height of the explosion of popular enthusiasm, incorporating himself in the construction of the democratic regime as a militant communist. He was the editor of the PCP weekly newspaper, Avante! in 1974 and 1975 and director of the newspaper O Diário from 1976 to 1985. He was president of the Municipal Assembly of Moura [the equivalent of mayor] from January 1986 to June 1988, a member of the Assembly of the Republic from 1990 to 1995, and also a member of the Parliamentary Assemblies of the European Council and the Western European Union.

While in exile he developed a vast network of working contacts and ties of friendship and cooperation with numerous progressive political personalities of Latin America. On his return to Portugal he carried out numerous missions of a political or journalistic character and expanded his vast network of international cooperation and solidarity.

Miguel Urbano Rodrigues was the founder of the website periodical resistir.info in 2002 and of the site ODiario.info in 2006. He was the main promoter of the memorable “Civilization or Barbarism” meetings at the small city of Serpa [in the Alentejo] in the years 2004, 2007 and 2010, where numerous local activists and some of the most prominent progressive intellectuals from the five continents of the world gathered to discuss the issues of the revolutionary transformation of society.

A tireless traveler and observer, an exceptional intellectual who nevertheless assumed and demanded no special attention in all the latitudes in which he lived or visited, he leaves us an extensive work encompassing diverse genres, always inspired by the understanding and celebration of the condition and action of the individual in the revolutionary transformation of humans and society, in the supreme achievement of Justice and Happiness.