bout 1,100 people marched and rallied May 22 before the Yale University commencement ceremony in support of the newly formed union of graduate students who teach as part of their Ph.D. candidacy. UNITE HERE Local 33 members called the protest to send a strong message to Yale to begin bargaining. Eight students have currently been on a hunger strike, consuming only water; two dozen have fasted in two-week shifts since April 25.

Eight departments voted to unionize in February under a National Labor Relations Board order. The workers want a secure living, including equal pay for equal work and fair benefits, and a collaborative negotiating process. One disingenuous reason the university gives for opposing the union is that all 2,600 graduate students did not vote. Union advocates focused only on departments where they had support.

Members of Local 33 were joined by union members from across Connecticut and from New York City, Philadelphia and Washington, D.C. After leading the march in wheelchairs, the eight union activists who were fasting took to the stage to break their fast. (Hartford Courant, May 22) Stay tuned. 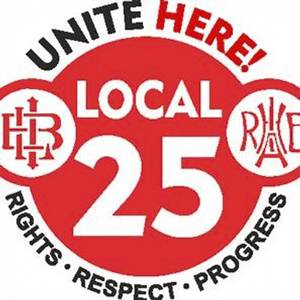 Housekeepers at 30 Washington, D.C.-area hotels represented by UNITE HERE Local 25 now have “panic buttons” strapped to their wrists. Often working alone, the women are frequent targets for sexual harassment and attacks. In fact, there was an international incident in January when a D.C. hotel guest was charged with misdemeanor sexual abuse for manhandling two housekeepers. Union surveys in some cities show that more than half the workers, predominantly women of color and immigrants, report aggressive sexual behavior by guests. (nbcwashington.com, May 23)

Members of CTUL (Centro de Trabajadores Unidos en Lucha), which organizes immigrant workers in low-wage industries in the Twin Cities area of Minnesota, attended the Home Depot shareholders meeting on May 18. They are contracted to do janitorial work for Home Depot though Kimco Services, which refuses to raise their low wages or give them benefits like paid sick days or vacation time. CTUL successfully negotiated with Target in 2014 for a Responsible Contractor Policy, which it is organizing so other large retailers like Home Depot will adopt it. While standing up for their rights as workers, they also addressed Home Depot’s support for Trump’s agenda, which attacks immigrants, women and workers’ rights. To show support for CTUL workers in their struggle with Home Depot, sign their petition at tinyurl.com/y7mhrtts.

Senator Marco Rubio (R-Fla.) has proposed S. 1094, which would allow managers at the U.S. Department of Veterans Affairs, often political appointees, to fire staff by lowering the evidence standard currently required for firing. As the 700,000-member American Federation of Government Employees notes, the bill stacks the deck in favor of “bad political appointees … to improperly punish good civil servants.” Under the bill, the penalty doesn’t need to reflect the charge; the time frame for the grievance process is decreased, which would limit time workers need to mount a defense; and negotiated contracts with AFGE could be overruled. While AFGE calls the bill “a major threat to … the right of employees to a fair judgment,” it also asserts it would “hurt veterans as the VA is successful because of its employees.” (afge.org, May 19)

The New York City Council passed a comprehensive, first-in-the-country law May 23 that seeks to correct unfair working conditions faced by thousands of workers in fast food and retail industries. One provision bans the practice of on-call scheduling (“clopenings”) where workers have fewer than 11 hours between shifts. Employers will have to pay an extra $100 to staff who voluntarily work such shifts. Another provision requires that employees be given an estimate of their work schedule upon hiring and receive a work schedule 14 days in advance (including regular and on-call shifts). The work schedule must be posted in a place accessible to all employees, and staff must be paid a premium for schedule changes made less than 14 days before the next shift. The law was developed in collaboration with unions and workers’ organizations to serve as a national model. (council.nyc.gov, May 23)