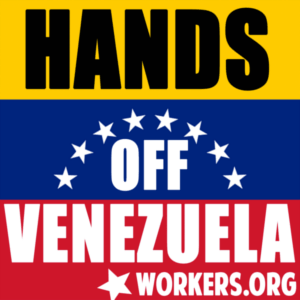 Never before has the Venezuelan Bolivarian process faced such a dangerous threat as it does today. This is true even though U.S. imperialism and its collaborators in Venezuela have imposed a continuous siege on the country ever since Hugo Chávez became president in 1999. Their hostile actions included a coup d’état, which was quickly defeated, and sabotage of Venezuela’s nationalized oil company.

Now that campaign has intensified and includes the possibility of direct military intervention to achieve their goal of “regime change.” For the last two months those opposing the revolutionary process, led mainly by the so-called Democratic Unity Roundtable (MUD), have committed violent actions daily.

These criminal acts have been directed with surgical accuracy against people identified as pro-Chavista. The reactionaries have targeted state establishments, too. The criminals have burned or destroyed everything — from entire fleets of public buses and offices of the government party, the United Socialist Party of Venezuela (PSUV), to maternity and children’s hospitals. They recently burned down Chávez’s childhood home.

These terrorists have already killed about 60 people. Their cruelty is unimaginable, as is their terrible racist character.

After identifying a young Afro-Venezuelan as a Chavista, the criminals set him on fire, chased him and then stabbed him. When some women from the wealthy sector of Altamira in Caracas saw an Indigenous woman, a well-known artist, they shouted at her, insulted her, and kicked and hit her with flag poles.

Paid criminal gangs and Colombian paramilitaries are also involved in these terrorist acts. The Venezuelan government denounced the use of children in these attacks to the United Nations Children’s Fund (UNICEF).(Diario Octubre, May 25)

It is important to emphasize that although the corporate media present these terrorist acts as chaos at the national level, they are generally limited to the areas where the mayor’s or governor’s office is in the reactionary opposition’s hands. In the neighborhoods where poor people live, they are not joining in these acts of terror.

The attacks against the Bolivarian revolution have taken place not just inside Venezuela, but the country’s embassies and consulates have been targeted as well, including the consulate in New York City. Physical attacks or insults have been leveled against Venezuelans and other people who are seen as being in solidarity with Bolivarian Venezuela, such as filmmaker Oliver Stone.

Through the Organization of American States and its president, Luis Almagro, the U.S. has mounted an international campaign to impose the so-called “OAS Democratic Charter” on Venezuela and to involve other countries in its hostile plans.

This is particularly true regarding Colombia. A few days after Colombian President Juan Manuel Santos met with U.S. President Donald Trump on May 18, Santos ordered the army to deploy its armored tanks to the Venezuelan border. Venezuelan Foreign Minister Delcy Rodríguez immediately denounced this provocation by the neighboring country.

Trump’s meetings with key Venezuelan opposition figures have also exposed U.S. assistance to these forces. He met with Julio Borges, opposition president in Venezuela’s National Assembly, and with Lilian Tintori, spouse of Leopoldo López, currently imprisoned for inciting violent protests in 2014 that caused 43 deaths. Violence inside Venezuela increased significantly after the meetings with Trump.

Corporate news reports, especially by CNN’s Spanish network, blame President Nicolás Maduro for the violence, calling it “state repression.” Faced with this false news, Workers World/Mundo Obrero interviewed a leader of the famous Neighborhood 23 de Enero (January 23), to gain a view of how working-class communities are assessing the situation and acting.

Juan Contreras is a member of the Simón Bolívar Coordinadora, a grass-roots social organization that has supported the Bolivarian process for 18 years. He was a deputy in the National Assembly. The January 23 Neighborhood is of vital importance in the revolutionary historical process. The Cuartel de la Montaña, where Commander Chávez is buried, is located there.

To put the current situation in context, Contreras told Workers World: “What happens today in Venezuela involves a counteroffensive that the Yankee empire has been promoting.” He listed the right-wing coups that overthrew progressive governments in Paraguay and Honduras and the ouster of Brazil’s former President Dilma Rousseff.

“And what is still missing?” he asked. “The crown jewel, Venezuela. For more than two decades, since Hugo Chávez became the ‘bad example.’ Thanks to the Bolivarian Process, these processes have spread to the Caribbean and Latin America and been established in Paraguay, Brazil, Bolivia, Ecuador and El Salvador. The Sandinistas returned in Nicaragua. Cuba remains the moral and ethical beacon for our peoples.

“The Bolivarian Process spread to our Latin America and Caribbean, and today the U.S. empire wants to end all these processes.”

Contreras emphatically declares the hostile forces in Venezuela to be counterrevolutionaries, not just opponents. He compares the current situation with “what happened in Nicaragua with the counterrevolution sponsored by the U.S. empire, which armed the ‘contras’ at the border, and sabotaged the work in the factories and the planting of the fields [agriculture] from within the ministries.”

Resistance to the attacks

“[This] is financed by the empire. They just approved more than $500 million for the counterrevolution,” Contreras continued. “Even though there is scarcely half a year left until the general elections, they are determined to demand elections now. What is now underway in Venezuela is a massive subversive process, trying to wear people down, and aimed at the overthrow of the Bolivarian process. But the people here are resisting the empire’s attacks.”

Contreras explained, “[The contras] are using economic warfare, hiding food and medicine.” He also mentioned the media war that attempts to portray Venezuela as a failed state, a “narco-state,” with an alleged “humanitarian crisis” meant to justify foreign intervention. “The empire believes this is the moment for the final thrust because there is no Commander Chávez. But President Maduro cannot be Commander Chávez. He must carry on with his own leadership style.”

Former U.S. President Barack Obama declared Venezuela a “threat to the U.S.,” noted Contreras. “But it’s such nonsense to say that Venezuela is a threat to the principal imperialist power of the world.

“But the people here are still betting on this revolution, which has helped the 80 percent excluded during the Fourth Republic [pre-1999] to have access to health care and education,” he stressed.

Maduro calls for a Constituent Assembly

“President Maduro, aiming for peace, has called for a Constituent Assembly in the framework of the failure of dialogue between the opposition and the government.” Contreras believes that during the dialogue “the possibility of reaching any agreement was zero because only the government and the counterrevolutionaries were present. There was no direct participation of the people, our workers, Indigenous people, peasants, students, people of the neighborhoods. The shirtless, the toothless, the ones the bourgeoisie does not want. They are the ones who were missing at the discussion table. That’s why it was condemned to fail.

“The Constituent Assembly is a great meeting of a national character where people’s representatives dictate the guidelines that should mark the coexistence between governed and governor. The popular sectors have the hope of achieving peace through this Constituent Assembly.

“But,” Contreras warned, “if that Constituent Assembly does not have the presence of the people, it will be a complete failure. There can be no favoritism; you cannot impose the individuals you want. The people who go there must be those who have maintained this process for 18 years. Because they are the ones who know what are the problems affecting the Bolivarian process. Legality is one thing, but our people have the political knowledge. That is why there should be a people-based Constituent Assembly. It has to be the people [the poor] who design the path to follow.”

Contreras also suggested that members of the Constituent Assembly must not have held public office for at least two years.

The Constituent Assembly, Contreras pointed out, in seeking to include measures not now in the Constitution, such as appropriate punishment of perpetrators of terrorism, must also include punishment for those who commit acts of corruption. He gives an example of those who — after stealing from the people, using the cheapest dollars granted by the government to import essential products — did not fulfill that obligation. They only brought part of the products into the country and kept the rest of the money. They went abroad to live and then returned to Venezuela without being punished.

How can the people be included in the Constituent Assembly?

“This is a class struggle and my class is one of those at the bottom,” stressed Contreras. “We must now allow the people to express themselves. From below, we want a Constitution that protects the Revolution and allows building on the theme of peace, not to where those fascist sectors want us to go.”

To include the people in the Constituent Assembly, Contreras explained, “We are holding assemblies across the country where the people discuss the issues. Here in the 23rd de Enero we have already held two. The 23rd is divided into organized sectors. In one sector we held a forum with a constitutional lawyer to which 325 people came. This was under the difficult conditions in which the country finds itself. There are 13 sectors in the neighborhood (parish), and we will visit it sector by sector to hold debates on the Constituent Assembly. Then we will hold a larger assembly where all the sectors and all the organizations that are part of the 23rd come.

“The life of the [revolutionary] process itself is at stake in this Constituent Assembly. The possibility that an alternative model can be developed in Latin America and the Caribbean is at stake.

“These debates are taking place in the factories, in the fields, in the universities. They are responding to President Maduro’s call for a discussion.

“In contrast with neoliberal models, where they bet on the individual, here we bet on the construction of an alternative model with new values within society, values of solidarity, and for moving forward to build a different economic, social and political model.

“I believe that this is the path that Comandante Chávez told us to build — the communal state as a transitional process for advancing Bolivarian socialism.”