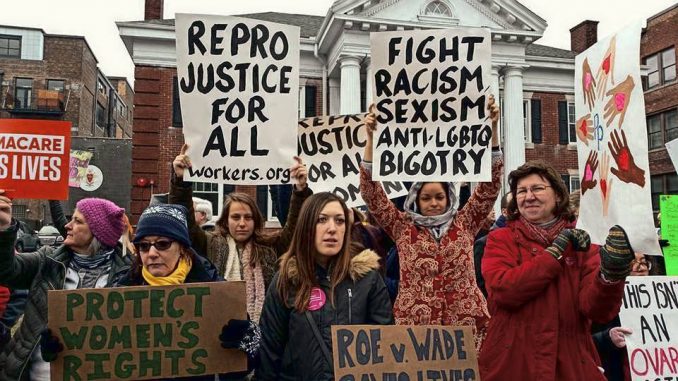 Health care for the poor is under attack globally as well as in the United States.

Trump’s expanded, deliberately misnamed global gag rule, “Protecting Life in Global Health Assistance,” was announced May 15. As Slate noted that day, “PLGHA [is] the sound you’ll make when you consider the cruelty written into its provisions.”

Under past Republican administrations starting with Ronald Reagan, the rule (officially the Mexico City Policy) only blocked U.S. funding for foreign organizations that provide abortion care, information about abortions and advocate for abortion legalization, amounting to $600 million annually. Now it will include health care dispensed by the U.S. Agency for International Development and departments of State and Defense, involving $8.8 billion earmarked for HIV/AIDS prevention, malaria and Zika treatment, maternal and child health programs as well as reproductive health and family planning. PLGHA will also affect men and children.

Slate wrote: “The U.S. is the largest government provider of global health aid in the world. In 2006, it delivered more than one-third of all donor support for the whole planet’s contraceptive supplies. After George W. Bush reinstated the global gag rule in 2001 … millions of women went without contraception … [and] rates of unintended pregnancy rose in some of the world’s poorest populations. So did abortion rates, as they do when women have no way to prevent pregnancy. … Under Trump’s rule, countries [in Africa, the Middle East and Asia] won’t get any contraceptives at all.”

To knowingly deny people the means to control their fertility is a grave abuse of human rights. There’s a connection between health care and other essential human needs for survival: food, water, clothing, shelter, education and jobs. All combine in an intricate web. “If a health clinic closes because the U.S. pulls funding due to its reproductive health work, people who depended on that clinic for all kinds of services will have nowhere to go. That’s ‘protecting life’ under Donald J. Trump,” concluded Slate.

Misogynist in chief Trump is stacking the Department of Health and Human Services with virulently anti-choice haters topped by Dr. Thomas E. Price, secretary of HHS. So anti-woman is Price that he stated “not one” woman has ever had a problem paying for birth control! (theatlantic.com, Nov. 29)

Charmaine Yoest, named HHS assistant secretary for public affairs on April 28, is former CEO of Americans United for Life (2006-16), the source of legislation passed by many states to restrict access to abortion. However, two AUL laws in Texas were overturned by the Supreme Court in 2016. (WW article, July 7) Before that, Yoest was vice president of the Family Research Council, classified as an anti-LGBTQ hate group by the Southern Poverty Law Center.

“This is the fox guarding the hen house, and women with low incomes will pay the price,” said Dawn Laguens, executive vice president of Planned Parenthood. “It is a cruel irony to appoint an opponent of birth control to oversee the nation’s only federal program dedicated to family planning.” (Huffington Post, May 1)

It’s also deliberately racist, sexist and anti-poor since the majority of women who benefit from Title X are poor women of color and other low-wage workers.

All this flies in the face of current statistics. The U.S. is at an all-time low for abortions and teen pregnancies and a 30-year low for unintended pregnancies, thanks to the Affordable Care Act’s provision of family planning as a preventative service.

Trump and his ilk only like “alternative facts,” which allow them to kowtow to the religious right and his racist, bigoted base.

But working-class women of all ages, nationalities and genders won’t go back. Proud and determined, women will continue to resist oppression!