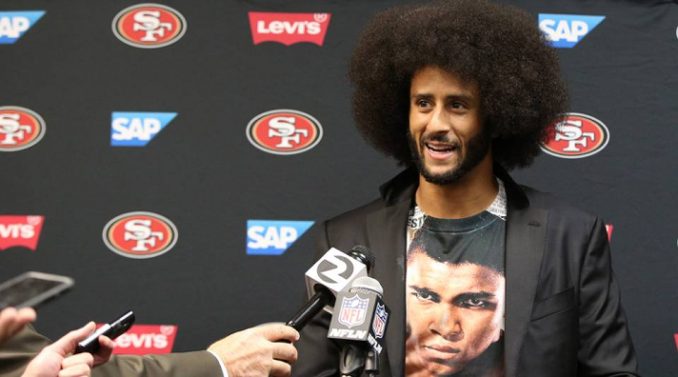 Last October, Colin Kaepernick, the African-American former quarterback for National Football League’s San Francisco 49ers, was asked after a game why he was wearing a Muhammad Ali t-shirt. He said, “To pay homage. [Ali] fought a very similar fight and was trying to do what’s right for the people. …

“He is someone who helped pave the way for this to happen. What he did and what he stood for, people remember him more for that than … as a boxer.

“I can’t let him die in vain. I have to be able to carry that on and try to fight that same fight until we accomplish our goal.” (nbcbayarea.com, Oct. 17)

The “similar fight” Kaepernick referred to is the ongoing struggle against racist oppression, especially police violence, which he protested by taking a knee during the national anthem at every 2016 regular season NFL game. Kaepernick remarked that he could not respect a flag of a country that did not respect the lives of Black people.

After Kaepernick’s symbolic protest demanding justice for Black and Brown victims and survivors of police brutality made national and international headlines, similar protests were carried out by teams and individual athletes in many sports on all levels — elementary, high school, college and professional.

Kaepernick paid homage to the Muhammad Ali who came to global prominence not only as the heavyweight boxing champion, but also as an activist who fought U.S. governmental repression against national liberation movements during the late 1960s. Ali was stripped of his boxing title and denied matches during his prime boxing years, 1967 to 1971, after he refused to be inducted into the U.S. military to fight in Vietnam. He refused because of his religious reliefs as a Muslim and his opposition to the war.

Although Kaepernick has gained millions of admirers, including NFL players from other teams, he has also been ostracized by right-wing politicians, NFL owners and coaches. Since his release from the 49ers following the 2016 season, he has not been signed by another NFL team.

Kaepernick has organized “Know Your Rights” conferences in the Bay Area, Chicago, New York City and other places to help bring about positive change for youth of color who are prime targets for “stop and frisk” harassment by the police and for mass incarceration.

Kaepernick was criticized for publicly saying he was not going to vote for either Hillary Clinton or Donald Trump for president due to their racism.

Dr. Harry Edwards is a sociologist, activist and founder of The Olympic Project for Human Rights. He attempted to organize a boycott of Black athletes during the 1968 Summer Olympics, where Black sprinters John Carlos and Tommie Smith gave the Black Power salute.

Just as Ali was willing to give up his livelihood for his political convictions, the same holds true for Kaepernick, who has stated that to resist white supremacy, he is prepared not to ever play again in the NFL.

Kaepernick’s Twitter feed continues to bring to light police terror. For example, he broadcast the fact that a white police officer, Betty Shelby, was found not guilty on May 18 of fatally shooting yet another unarmed Black man, Terence Crutcher, in Tulsa, Okla. Crutcher’s murder was captured on videotape last September.

To help put into perspective how Black lives are dehumanized, Tyler Jones, a young Black man from Cincinnati, was sentenced to 19 years in prison, also on May 18, for multiple felonies, including wounding a police dog. Jones did not fatally shoot anyone.

Kaepernick is fighting against endless racist atrocities. In the early morning of May 22, Richard Collins, a 23-year-old Black man scheduled to graduate from Bowie State University the next day, was stabbed to death while simply waiting at a Maryland bus stop. His attacker? A white supremacist and neo-Nazi belonging to the “Alt Reich: Nation” Facebook group. A Baltimore FBI agent had the nerve to question whether this horrendous murder was a “hate crime” or not. (nbcwashington.com, May 22)

A 7-year-old special-needs Latinx child, Yosio Lopez, was put in handcuffs at his school by Dallas police on May 16 after being Tased by school officials for banging his head against a wall. Lopez is diagnosed with “attention deficit/hyperactivity disorder and another mood disorder.” The child was then sent to a mental hospital without his mother’s permission. She was denied the right to visit her son for nearly a week. (cnn.com, May 19)

Acting head coach for the National Basketball Association’s Golden State Warriors, Mike Brown, who is African American, was nearly arrested by the California State Highway Patrol for trying to enter a gate at his own home arena before the May 16 playoff game in Oakland. The patrol was escorting the San Antonio Spurs, the visiting team, into the Oracle Arena when Brown was stopped and harassed.

Even as Brown kept telling the police that he was the Warriors coach, a cop yelled at him, “I don’t care. You, stop!” (Mercury News, May 16) If this had been the Warriors head coach, Steve Kerr, who is white, the police would have responded very differently.

These recent examples of white supremacy help to deepen the legitimacy of Colin Kaepernick’s heroic protest, spurred on by the defiance of the great Muhammad Ali of the 1960s. Both continue to inspire millions of people into actively defending Black and Brown lives.