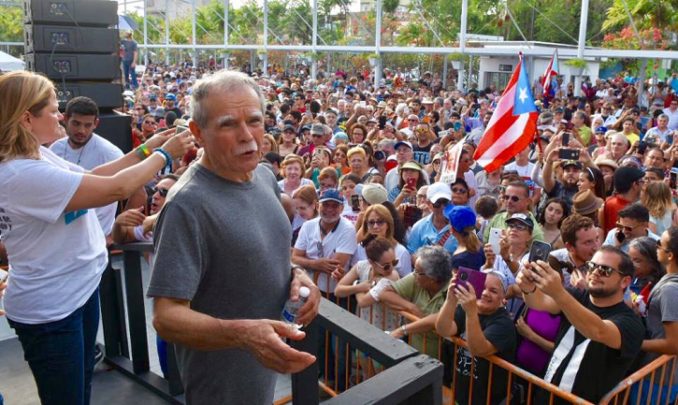 Puerto Rican national hero Oscar López Rivera in San Juan, Puerto Rico, on May 17, the historic day of his freedom.

The long-awaited day finally arrived. Oscar López Rivera’s confinement ended on May 17 after he had spent the prior three months under house arrest at his daughter Clarisa López Ramos’s house. That was a requirement of former President Barack Obama’s commutation of his 70-year sentence for “seditious conspiracy.” Finally, Oscar could meet his people, face-to-face, freely. Finally, those people who joined in the claim for his release could hear his voice, clear and strong.

To publicly welcome him, dozens of people began gathering around 6 a.m. in front of the building where he lives with his daughter. The student choir from the University of Puerto Rico serenaded him with what has become a second national anthem, “Verde Luz.” The song’s lyrics include the verse, “For you I want to have the land free, with only one star.” It’s a hymn for Puerto Rican independence.

Then, at 11 a.m. in the Escambrón, in front of the sea for which he had been yearning for 36 years, Oscar began his first press conference, which was full of symbolism. He began by explaining his request that it be facing the sea, to highlight both its importance for the Puerto Rican archipelago and the role it could play in fostering the economy. This alluded to the measures to privatize goods and resources that the dictatorial Board of Fiscal Control, imposed by the U.S. Congress, wants to apply to the archipelago to pay off the illegitimate debt of more than $70 billion.

The physical presence of Oscar in the movement occurs in the most critical moments for Puerto Rico. The struggle in this period will decide whether the Boricua nation — Borikén, by its Taíno name — will remain and advance toward its sovereignty, or if it will revert to the “Porto Rico” — a name the U.S. gave when it assumed control — thus making it openly a backyard for speculation by foreign capital, primarily from the U.S., and where the dwindling Puerto Rican population will only provide servants to the new inhabitants.

Oscar noticed these developments only a few hours after he toured some of the old streets he remembered as a young man. He commented on the process of gentrification of former working-class neighborhoods and the noticeable increase of U.S. residents. He warned of the potential danger that Puerto Rico would become another Alaska or Hawai’i, where new U.S. residents constituted a majority, thus affecting electoral and decisive power.

He lamented the brain drain. This flight, which depletes the productive capacity of Puerto Rico through the emigration of young professionals — most of them educated in the public university with funds from the Puerto Rican people — will benefit the economy of the same country that has imposed a debt on the archipelago and destroyed all possibility of economic development that could benefit the Puerto Rican people and not the foreign corporations.

He criticized foreign firms such as DuPont and Monsanto that have flooded the country, using Puerto Rico as the basis of experiments that poison the environment and destroy the island’s capacity.

Despite the exposition of the harsh Puerto Rican reality, Oscar’s message was one of hope and commitment to the struggle.

He outlined his plans. First, he will complete his hectic travel schedule — the next day to Chicago where he lived since adolescence, and then back to Puerto Rico in 24 hours to go to San Sebastián, where he was born. In addition, he will visit several cities in the United States, including New York, where he will make a presentation before the United Nations Decolonization Committee.

He will also be present on June 11 at the Puerto Rican Day Parade in New York. His appearance has been the subject of right-wing criticism. The Goya Company, whose products are heavily consumed by the Latinx community, has withdrawn its support for the New York parade. This withdrawal has informally prompted a boycott campaign directed at that firm by many activists who fought for Oscar’s liberation.

After these trips, he said he wants to concentrate on building a foundation whose purpose is to achieve unity, the Oscar López Rivera Foundation, Libertad.

He sees the unity of the Puerto Rican people as essential in achieving decolonization. Without any kind of sectarianism, he points out that “I believe in unity. I believe we can create a broad tent where all of us who love our homeland can fit, because we need to love our homeland in order to make Puerto Rico the nation that it has the potential of being.

“If we truly love our homeland, then it should not be so difficult to unite. Do it because we love our homeland, because if we do not do it, we will lose her. I can say with complete confidence that loving the homeland costs nothing. What is expensive is if we lose her. If we continue on the path we are going, Puerto Rico will not be our homeland.” (telesurtv.net, May 21)

Once in the land of Boricua, he wants to make what he called his pilgrimage: to go to every one of the 78 municipalities to have dialogues with the people, listening to their concerns, and thus be able to work for decolonization and independence more effectively.

An important part of Oscar’s message was gratitude to the people who waged a united struggle for his liberation, even though they held different ideological perspectives.

But special thanks went to the governments of Cuba and Venezuela, and he also mentioned individually each of the Cuban Five.

Oscar also received calls and messages from President Nicolás Maduro of Venezuela and Raúl Castro from Cuba. The message from Fernando González, one of the Cuban Five, was especially moving, as they shared the same cell for four years.

With respect to Venezuela, and in response to hostile questions from the media accusing him of defending President Maduro, Oscar responded that it is U.S. intervention that is guilty of violence in Venezuela and that is why he demands that the U.S. stop its interference there.