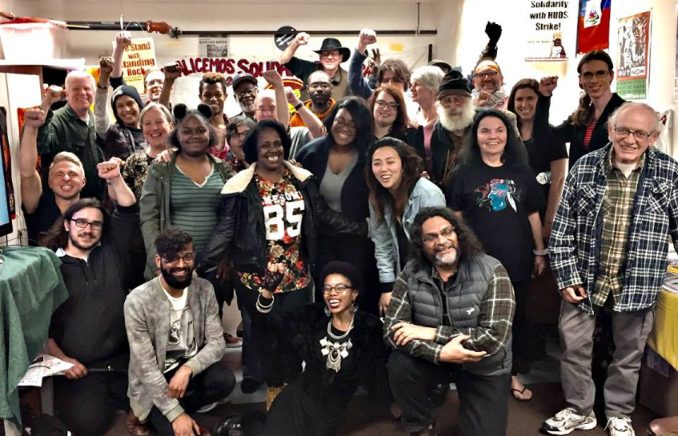 An intergenerational gathering of Workers World Party members, local activists and members of the community arrived for an evening of education and celebration on May 12.

Roberts and other student organizers mustered 400 students to occupy an administration building until the decision was reversed. “The fight was about health care, dignity and rights,” said Roberts. “I tell students, ‘If Harvard doesn’t respect the workers, they will not respect the students.’”

The students refused to be moved, neither physically nor ideologically, “until we got confirmation that we won.” Roberts concluded, “Clearly we have the power to move things and change things. Without workers, this system cannot exist.”

Teresa Gutierrez, a member of Workers World Party’s National Committee and a co-founder of the May 1 Coalition for Worker and Immigrant Rights, spoke of the immigrant community’s invaluable contributions to the labor movement.

Gutierrez emphasized the inextricable link between xenophobia, systemic poverty and race. “The attacks on immigrants flow from capitalism … [which] uses them to exploit cheap labor. … Class is primary, but racism is not secondary,” she said to uproarious applause.

She also emphasized the difference between immigration and forced migration: “We need to educate the movement that we are not all immigrants. Mexicans didn’t cross the border. The border crossed them. In the 1800s, half of Mexico was stolen because America wanted to expand slavery.”

Gutierrez explained that enslaved Africans were not immigrants, but kidnapped prisoners forced to generate profit for their kidnappers. Indigenous people were driven from their lands by immigrants from Europe. Today, Latinx people flee the instability and war caused by U.S. imperialism. “To fight for immigrant workers is to fight for all of us. It is linked to every struggle,” she said.