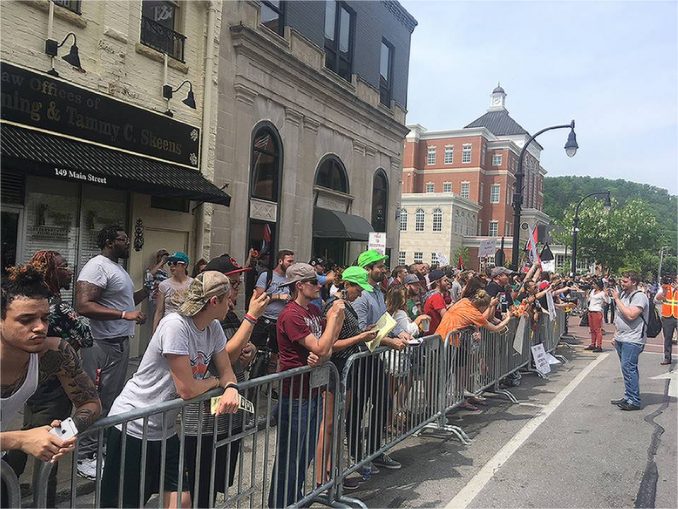 Listening to West Virginia Public Radio on the way to work yesterday morning, I heard a piece about the “neo-Nazi” rally in Pikeville.

A coalition of fascist and white supremacist organizations calling themselves “Nationalist Front” descended on downtown Pikeville for a rally outside the courthouse. Organizations included the so-called Traditionalist Worker Party, the National Socialist Movement and the League of the South, among others. The TWP’s head is Matt Heimbach, who gained infamous notoriety for a 2016 assault on a Black woman, a college student, at a Trump rally in Louisville, Ky.

Much of the radio story involved interviews with local residents who did not appreciate the day’s event, and rightfully so. All of downtown Pikeville was shut down for an entire day. Stores and restaurants were closed, and many residents avoided the area out of fear and concerns for safety. It makes sense to report that, when a high-stakes event like this occurs, most people want nothing to do with it. Rather than focus on developing opinions on the issues at hand, they tend to focus on the changes in their community, which would have otherwise experienced a “normal” Saturday afternoon.

So, regarding the immediate sentiment of Pikeville residents, Public Radio was pretty accurate. The problems were with the greater narrative — that the participants were fascists and anti-fascists, both from out-of-state.

So, who was there? Well, I was there. And I saw on one side of Main Street, barricaded in front of the County Courthouse, the aforementioned “Nationalist Front,” hereafter to be referred to as “Nazis,” all white and nearly all male, who brandished firearms, carried shields and gave “Sieg Heil” salutes.

On the other side, barricaded along the sidewalk, was “the opposition.” Men and women, most seemingly working-class, mostly white but also multinational. Between these barricades, down the middle of the street, were various “law enforcement” officers, journalists and photographers.

There seems to be no argument that the Nazis were not from Pikeville and, judging by their pronunciation of “Appalachia,” that many of them were not from anywhere even remotely nearby. This is the part that Public Radio got right. These were a bunch of out-of-state Nazis who came to shake up Pikeville for a few hours before moving on to the next town 45 minutes away.

But what about the opposition? According to the radio story, they were all anti-fascists from out of state. This sets up a narrative in which local residents voice their annoyance with out-of-staters from opposing sides coming to town and claiming to speak on behalf of local people.

Not quite the case. It is definitely true that some of the opposition were from other states, but certainly not everyone. For instance, I was standing with “the opposition.” The very first person I spoke with on my arrival was a teacher who lives in Pikeville.

And progressive media outlet Unicorn Riot interviewed “a woman who identified herself as a mother against racism in Appalachia [and] wanted to make a statement to the press, but didn’t want to show her face on camera because of fear of being targeted by the hate groups converging that day.”

She said: “These Nazis said they put a call out to white families. I’m a white mother in Appalachia and I’m here to say Nazis are not welcome in Appalachia. These people say they’re for family. … They’re not for family, they’re for hate and fear. They want to hear from family? I am a mother. And I’m telling them go home. … Your mothers are probably ashamed of you. If you were actually for family, then I would not be giving interviews under an assumed name or afraid to show my face on camera. … There is a history of resistance to Nazi propaganda and Nazis in Appalachia, and I’m glad to say that people in Appalachia are standing up for themselves.”

She was carrying a sign: “Mother Against Racism in Appalachia.”

I stayed until the very end, and when most people had left, there remained a small group, about 30, of self-identified anti-fascist protesters from outside mountain country.

As far as I could see, the rest of the opposition had been folks from various backgrounds who came from different parts of Kentucky and West Virginia, and their message was quite clear: “Nazis are not welcome in Appalachia!”

Gary DeLuke is an Appalachian union organizer and activist.