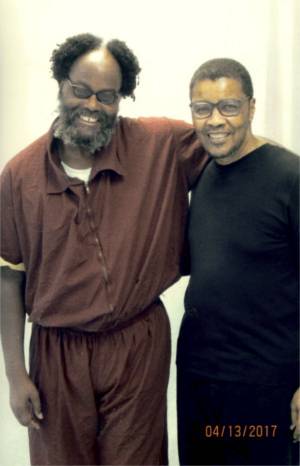 Frackville, Pa. – Ona Move! We did it again! The movement’s swift and forceful response got what we wanted and what we were entitled to: information about where political prisoner Mumia Abu-Jamal is being held in the “correctional system” and the opportunity to see him.

During the night of April 26, the Pennsylvania Department of Corrections suddenly removed Mumia from his cell at SCI Mahanoy. The move was so sudden that Mumia only had time to call out to another prisoner to let his supporters know before he was gone.

The immediacy of movement pressure on the prison and the DOC regarding Mumia’s disappearance from our radar, and the volume of that response, forced the prison to meet our demand: tell us where Mumia is and allow Keith Cook, Mumia’s brother, and myself to see Mumia.

Within minutes of Mumia’s return from Geisinger Hospital, where he had tests done April 28, he was brought to the visiting room and waited for us.

Mumia had an endoscopy to assess whether his esophagus had deteriorated in any way. The DOC’s punitive hepatitis C protocol required “careful” monitoring but — no treatment! The latest test was to assess whether Mumia had esophageal varices — bleeding of the esophagus tantamount to death. The possibility of this warrants, according to the DOC, careful “assessment.”

In Kafkaesque logic, the DOC had first refused Mumia treatment, was finally forced to provide it by a judge’s ruling, but now is still following its previous “protocol” declared by the same judge as “unconstitutional.” This pattern is in keeping with the deliberate irrationality of how the DOC tries to maintain its control.

Then, too, the DOC may be trying to show that they are monitoring Mumia to try to lighten their defeat in the face our lawyers’ pursuit of compensation for Mumia for their incompetence, inhumanity and near killing of Mumia. Fortunately, Mumia’s esophagus shows no sign of deterioration, and he has no varices.

I had called the Mahanoy earlier in the day to try to locate Mumia. Dr. Steinhart, the infirmary director, would not give me any information, saying he could only give that to family members. I told him that I and Mumia’s brother, Keith Cook, would be at Mahanoy shortly, and that we would expect officials to give the information we wanted to Keith, clearly a family member.

Our reception at Mahanoy could only have been generated by movement pressure. Given the usual prison milieu, our treatment felt positively regal. Within minutes of my arrival, Jane Hinman, the assistant to the superintendent, came out, greeted me graciously, and said the superintendent had asked her to let us know that we would be able to visit with Mumia.

Soon after Keith arrived, the desk correctional officers, two of whom I’ve seen many times before, told us we would be processed within 20 minutes. They did not look at our IDs, and they literally rushed us in, assuring us that we would be the last to leave and that we would have at least a 2 1/2 hour visit.

Mumia was in great spirits, relieved that he did not have the varices and that his esophagus had remained stable despite the cirrhosis he has contracted from the lack of hep C treatment under prison punishment.

Again and again he waxed poetic about the strength and power of our movement. We were all convinced that the “graciousness” of the prison staff, on all levels, came from a decision not to provoke the movement any further. The state of Pennsylvania and its prison officials did not want trouble and knew they would have it if they did not accommodate.

The three of us celebrated over a lunch of organic spinach salad and tried to assess the recent court hearing on a petition to overturn Mumia’s conviction. We ended with part of Assata’s famous quote, the mantra of young fighters today: “It is our duty to fight for our freedom. It is our duty to win.”

We have sure had some significant victories in the struggle for justice for freedom fighter Mumia Abu-Jamal. On to more victories!

Suzanne Ross is a former co-chair of the Free Mumia Coalition in NYC and works with International Concerned Family and Friends of Mumia Abu-Jamal.