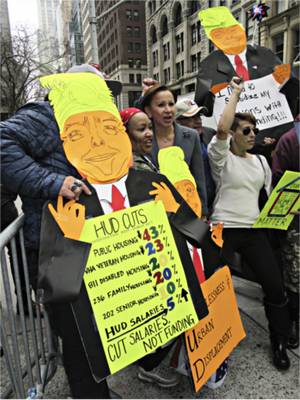 New York, April 20 — A lunchtime civil-disobedience action blocked traffic in front of the Manhattan Federal Building today, as a thousand people protested at a “No Cuts-Housing” rally. This was prompted by President Donald Trump’s proposal to cut $6.2 billion from the budget for public housing. One hundred city workers from DC 37 of the American Federation of State, County and Municipal Employees were at the protest, which was called by many tenant and homeless organizations.

The cuts are planned for the Department of Housing and Urban Development, while over 60,000 homeless people suffer in New York City where affordable housing is sorely needed. The cuts include 43 percent in public housing, 23 percent for veterans, 20 percent for people with disabilities and 10 percent for seniors.

Some 85 percent of homes receiving federal rent assistance in New York include seniors, people with disabilities and children. According to Harvard’s Joint Center for Housing Studies, by 2035 low-income seniors may use more than half their income for housing.

At today’s event, Katie Goldstein, of Tenants and Neighbors, said that Trump’s proposed HUD cuts “really is a homelessness plan for low-income New Yorkers!” The next meeting of the group will plan for more fightback as another attack is anticipated from the racist president. The working class gets the connection between tax funding for war and the rich while most struggle with low-paying jobs and impossibly high rent. “Hands off HUD!” was heard loud and clear in today’s chants.

With the increase in gentrification leaving working-class communities devastated, it is not surprising that protests demanding affordable housing are getting attention in local media. More people from these communities, which are majority Black and Latinx, are participating in such protests.