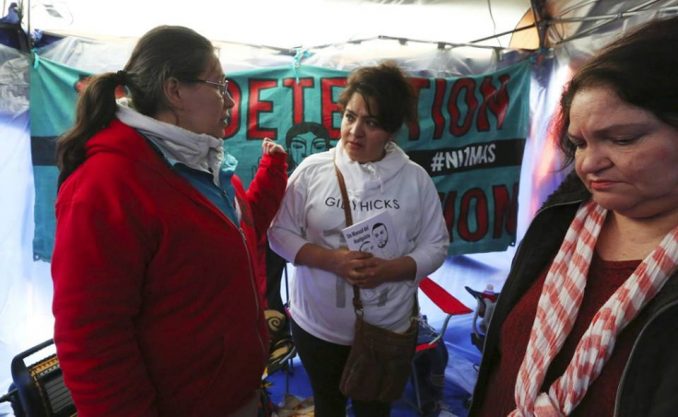 Tacoma, Washington — Some 750 immigrant prisoners held a united hunger strike against inhumane conditions at the Tacoma Northwest Detention Center from April 10 to April 15. The detainees withstood threats that they would be thrown into solitary confinement or transferred out of the prison. Indeed, some were shipped out to a prison in Oregon.

Immigrant prison conditions, already terrible under President Barack Obama, have worsened under President Donald Trump. Across the country, prisoners are being denied the basic necessities of life, with no due process of law.

The prisoners’ demands, which remain unfulfilled, are to change the food menu; lower commissary prices; improve hygiene; increase recreational time; have schoolwork and other activities available to keep detainees occupied; improve medical attention; increase wages for working detainees; and speed up the legal process for detainees.

These are some of the same demands that the prisoners went on strike for in 2014 — a 56-day hunger strike/work stoppage. The exploited prisoners usually receive only one thing to eat: beans. They have little access to health care, and wages are only a dollar a day.

NWDC Resistance, an organization of solidarity activists including former prisoners, is supporting those inside. The group set up tents and canopies just outside the prison fence and coordinated activities 24-7 all week long. These included doing media work, getting legal help for the prisoners and holding support rallies in front of the prison.

A NWDC Resistance “Call to Action” says: “Trump has staffed his immigration force with openly anti-immigrant officials with links to white supremacist organizations, leaving people detained with little choice but to put their bodies on the line to fight for basic dignity. Attorney General Jeff Sessions’ newly released memorandum calling for increased prosecutions of immigrants and their supporters, combined with a rollout where he referred to immigrants as ‘filth,’ highlights the need for local resistance to the federal detention and deportation dragnet.”

At an April 16 Easter Sunday rally at the conclusion of the strike, international human rights activist Nestora Salgado spoke for the immigrant strikers. She stated that the next time those on the inside go on strike, she and others on the outside should also go on a hunger strike — that we should not see ourselves as apart from them. Salgado has herself been imprisoned in Mexico for her community self-defense stand.

Michael Dorsey, a Black representative of Food Justice, said, “On May Day [May 1] we are going to be standing with the people who harvest the food, like many of the workers in the detention center.”

Maru Mora Villalpando, speaking for the NWDC Resistance and the prisoners, condemned the prison’s lack of health care. She read a statement from the prisoners: “We have ended our hunger strike but this is not the end. More actions will continue. There is no turning back!” She reported that the prisoners were enthused that their actions and message had gotten out in the media around the country and around the world.

Villalpando asked people to call the prison, which is owned by the Geo Group, at 253-779-6000 to insist the prisoners’ demands be met. The same message can be given to Immigration and Customs Enforcement in Seattle at 206-835-0050. She stated that her committee remains on high alert for more struggle!