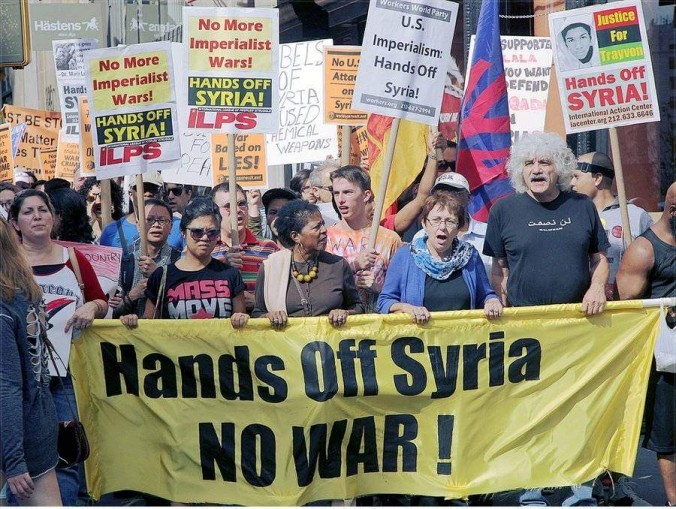 The U.S. administration reversed its position on Syria on April 5, implying it would expand U.S. intervention. On April 6, Secretary of State Rex Tillerson said there was “no role” for Syrian President Bashar al-Assad, thus threatening a major war in the region. (New York Times, April 6)

This followed the news that a chemical weapons discharge in Idlib, Syria, on April 4 left dozens of people dead. Before the dust had settled, warmongers in Washington and their British and French allies, both former colonial powers in that region, blamed the Syrian government and its Russian allies for the attack.

The rhetoric of imperialist politicians, the bourgeois press and the wide variety of pro-war forces immediately reeked of another U.S. invasion and wider war. It would not be the first U.S. war built on a phony pretext. In August 1964, the phony Gulf of Tonkin incident expanded the war on Vietnam until 3 million Vietnamese and 58,000 U.S. soldiers were dead. In 2003, the phony pretext of Iraqi weapons of mass destruction led to the destruction of Iraq with millions killed and displaced.

The insidious lies of empire are always used to spearhead colonial attacks against oppressed nations. Trump, the self proclaimed isolationist, transformed before our eyes into the Clinton interventionist, an alternative he had earlier used to frighten so many. London, Paris and Washington rushed a proposal to the United Nations Security Council blaming Syria.

The U.S. stance reeks of hypocrisy, as within the last month U.S.-led bombings in Mosul, Iraq, and Raqqa, Syria, have killed up to 700 civilians, including hundreds of children, according to reports from those countries.

What smelled familiar about this lie wasn’t just the record of past wars. In 2012, Obama drew what he called a red line in Syria, the Damascus government’s alleged use of chemical weapons. Syria possessed chemical weapons as a deterrent to Israeli nuclear weapons; it had no intention of using them against the reactionary insurgency backed by imperialism, especially considering that they knew it would mean an invasion.

Obama threatened a “no-fly zone” (code for a bombing campaign, the same strategy used to liquidate the Libyan state) over government-held territory. The corporate media marched lockstep with the Pentagon, parroting their every word to mobilize popular support. They failed to do it.

Russia negotiated the removal of Syria’s chemical weapons to appease the Western war appetite, a process overseen by international observers. The Syrian state no longer has any chemical weapons, yet the media nearly four years later continue to mimic the Pentagon’s argument, as if this had never happened.

The Trump administration’s messages on Syria were mixed for a few months. Trump concentrated on blaming the Obama administration for retreating in 2013. But the new administration’s actions speak for themselves. Trump announced over 1,000 additional U.S. ground forces in Syria. He declared the U.S. wouldn’t leave Syria even after they accomplish their stated goal of defeating the so-called Islamic State. This continued presence would amount to a de facto partition of Syria.

With Islamic State on its last legs, it became clear that the U.S. role on the ground in Syria would evolve. On March 30, Nikki Haley, the U.S. ambassador to the U.N., said, “Our priority is no longer to sit and focus on getting Assad out.” Three days later, on April 2, answering a question, Haley said, “Assad is always a priority.”

On April 5, one day after the Idlib chemical weapons attack, Trump said: “My attitude toward Syria and Assad has changed very much. … You’re now talking about a whole different level.” When asked if the U.S. might lead an attack against the Syrian state, Trump answered: “I’m not saying I’m doing anything one way or another, but I’m certainly not going to be telling you. … Militarily, I don’t like to say where I’m going and what I’m doing.”

Those who mistakenly believed Trump would be  anti-intervention may find this change shocking. Those who understand the nature of U.S. imperialism knew it was inevitable. Washington never changed its goals in Syria, only its short-term strategy. When the U.S. government couldn’t liquidate the Syrian state directly, NATO, including Turkey, Saudi Arabia and other Gulf monarchies, armed death squads such as al-Qaida and Islamic State. These reactionary forces oversaw the U.S. goal of destroying Syria’s secular, pluralistic society with bombs.

Once these contra forces had destroyed enough of Syria, in 2014, the U.S. used them as an excuse to begin bombing Syria. This extension of the war on terror into Syria did little damage to the Islamic State. The U.S.-led airstrikes for the most part destroyed vital infrastructure. Often, the U.S.-led coalition struck Syrian soldiers, paving the way for IS advances.

The man at the podium may change, but the ruling class must secure its profits one way or another to survive.

Syria today stands at the front line, defending itself against a massive imperialist assault. It is the last truly independent Arab state. For six years, Syrians have faced a multifaceted fight to the death against dozens of countries, yet they and their allies are closer to victory than ever before. Syria’s steadfast resistance has accelerated contradictions within global imperialism, making the ground fertile for resistance to imperialism worldwide.

The war against Syria was always about more than natural resources or pipelines. Syrian society was built on a foundation of secularism, pluralism, resistance and progress. The war against Syria amounts to a counter revolution to destroy these very foundations. Imperialism had to curate the most reactionary, sectarian forces to accomplish that goal, just as they did in Afghanistan with the reactionary Mujahideen, which they later used as a justification for occupation.

In spite of massive pressure, the Syrians shot down a Israeli jet giving air support to contras in the city of Palmyra on March 17. Damascus stated that if their airspace is violated by the Zionist state again, it won’t hesitate to stop them, exhibiting a resolute refusal to surrender sovereignty. Syria has enabled the forces of resistance in the Middle East and North Africa (MENA) region, and the world, to coalesce against imperialism.

It is the duty of those living in the belly of the beast, in the U.S., to unequivocally demand imperialist forces leave Syria. We have to combat bourgeois propaganda until our vocal cords are worn. The same media that justify the police lynchings of Black children in the U.S. are using the deaths of Syrian children to justify war.

The wars against Afghanistan, Iraq and Libya were all colonial genocides built on lies. Syria is no different. The occupations of all those victims are ongoing. The Afghanistan intervention is the longest war in U.S. history. A U.S. occupation of Syria would be no different.

Because Iran and Russia will not let Syria be turned into a “failed state,” a U.S. “retaliation” promises to make this regional war a world war. The liberation of the workers and oppressed peoples in the U.S. is dependent on our ability to unite our struggles with the independence struggles of oppressed nations.